Several months back, maybe a year or more, I read an article about the opening of the Alden, in Chamblee, in Atlanta magazine. From that point, I’ve had it on the short list of places to try. This Tuesday, as I was heading to meet some friends in Buckhead, I was heading down Peachtree and I rolled right into the Alden. Chef-owner Jared Hucks, a former chef at Noma (in Copenhagen – named the best restaurant in the world 2010, 2011, 2011 and 2014 – currently it is only number two) opened this intimate, airy space in a fairly new development where Clairmont dead-ends into Peachtree.

One of the advantages of dining alone, and dining early, is that often you can get a quality, quick meal. The restaurant is small, and intimate, with the centerpiece being the open kitchen and the chef’s table surrounding it.

My server this evening was absolutely spectacular, bubbly and a big fan of what the chef was sending out of the kitchen.

I started with a salad of mixed greens and heirloom tomatoes (they had me at heirloom tomatoes). It was tossed in a dill vinaigrette, topped with fresh goat cheese and served with a hemp seed cracker. Also in the salad were tiny pearls of tapioca, dyed with beet juice, served in bunches, like tiny grapes.

This was a beautiful dish and a really reasonably priced starter. And absolutely delicious – light, fresh and full of flavors. I finished the salad and waited, expectedly, for my entree. Here’s where I hit a snag. The pacing was off. There was a good twenty minutes between my finishing my salad, which I savored (not swallowed hole) and the arrival of my entree. I know there is a mindset about slow food, but I think the server needs to pace the meal according to the customer – I was alone and didn’t need that much conversation with myself…. 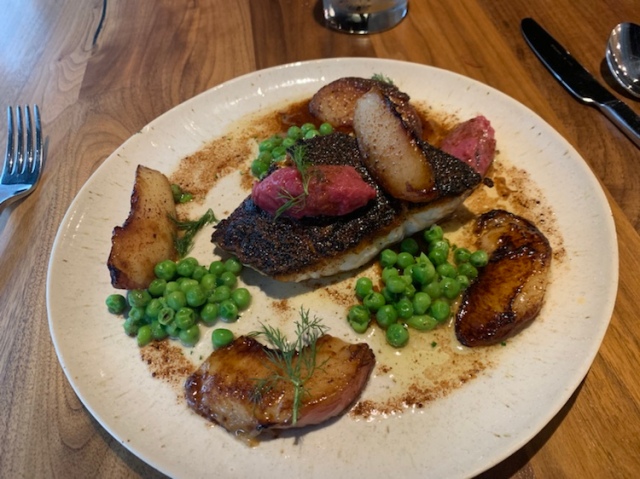 I followed it with red snapper with rhubarb jam, roasted peaches and green peas. Honestly, it is rare, for me, to go to a nice restaurant and not have something in a dish that I wouldn’t order on it’s own (there are always scallions, or mustard or …). Every component of this dish was designed for me – or at least is appeared that way to me. This was a wonderful meal – beautiful and well composed.