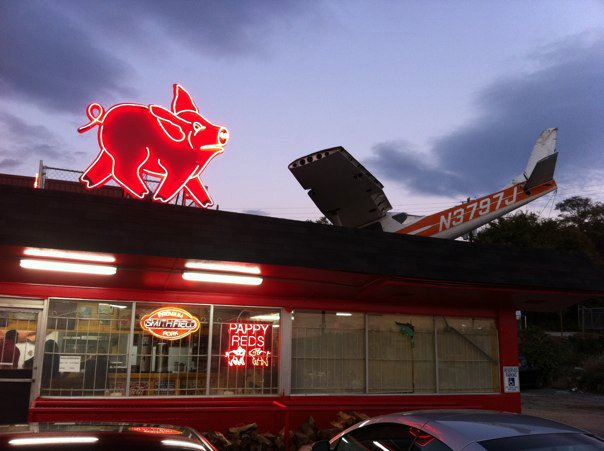 One night, driving down Chattahoochee Avenue looking for a spot for dinner, I drove by P Reds B B Que. The first thing that came to mind was the part in The World According to Garp where the plane crashes into the house and Garp buys it because (I paraphrase) “what are the odds it is going to happen again? It’s pre-disastered!” A restaurant with an airplane in the roof? I’m in. So into P. Reds B B Que we went.

While standing at the counter to order, I look behind me and see this fellow sitting at a table with three phones and a checkbook. We start up a conversation and it turns out that he is the owner. When I ask if this is the same Pappy Reds that was in Cumming / Roswell. I get the whole story, which, in the Readers’ Digest condensed version, is that the business had become more than 50% catering and all that catering was downtown and they were cooking and driving 45 minutes+. So the other locations gradually closed and they opened this spot recently.

I ordered the two meat plate: ribs and pork. The ribs were good, the barbecue merely adequate.