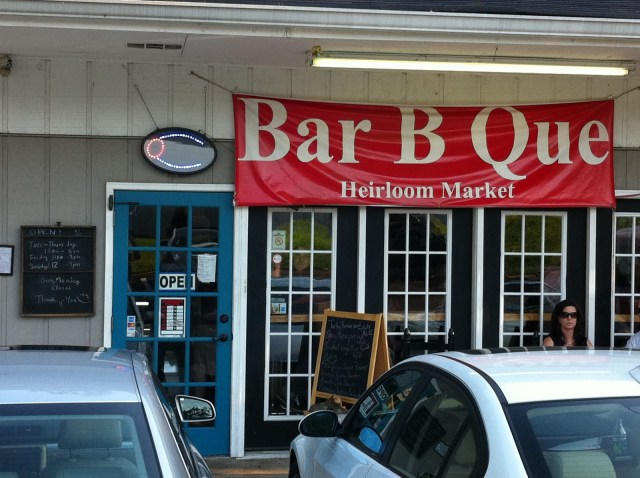 A friend sent me a review of this “new” barbecue place near Marietta (it’s in that “odd part” of the city of Atlanta where I-75 & I-285 intersect) and asked me if I’d been.  The AJC only gave it two stars, but I kept it in mind.  One Saturday night, Jo and I were over at Cumberland mall and decided to give Heirloom Market a try.  We drove by it.  Twice – once in each direction.  Then we couldn’t find a place to park.  This is a unique location – in one end of a strip mall whose only other tenant is a convenience store.   Among the last spots in which I’d look for a barbecue restaurant.

The approach is unique – the two chefs have different backgrounds.  One was a Korean pop star who came to Atlanta to train to be a chef.  The other is a Texas-born, Tennessee-raised, Georgia-trained, self-proclaimed “hillbilly”.  They worked together in the kitchen at (the defunct) Repast, and decided to open their own place.  The barbecue is Texas.  The daily side specials Korean-influenced:  kimchi;  roasted sweet potatoes; and cucumber and radish salad.  Along with typical BBQ sides – fries, mac-n-chees, collards, baked beans and brunswick stew.

The first night we went, we tried a couple of samplers.

I had ribs, sausage and chicken. Jo had pulled pork and brisket.

The brisket was the best of the lot, followed by the pork.  Since the first visit, I’ve been back twice for lunch.  I paid attention to what we noted on the first visit – I ordered brisket, fries and mac-n-cheese. 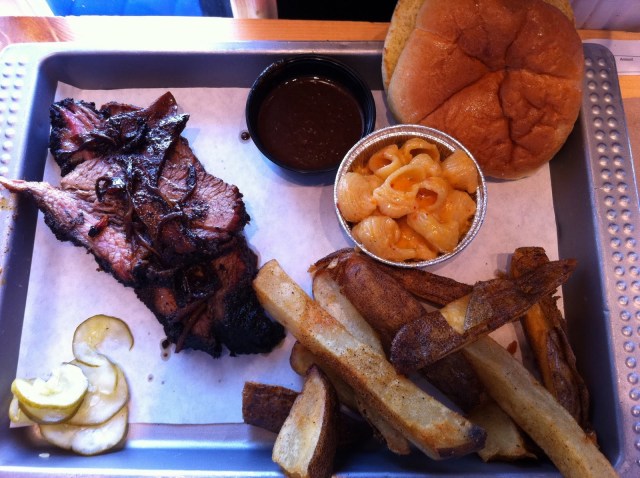