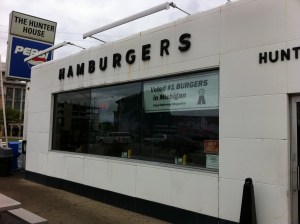 Open since 1952, Hunter House Hamburgers had a big sign out front that they had been named the best burgers in Michigan.  I felt obliged to take the challenge.  Like Carter’s before it, and Motz’s after it, it’s all about the onions.

In fact, the T-shirts at Hunter House say “Onion breath is better than no breath.”  I guess everyone needs a motto. 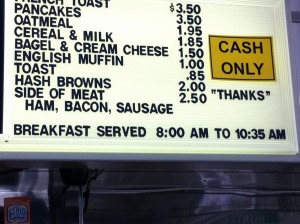 Apparently, they also take their breakfast serving hours quite seriously.  I REALLY don’t like onions, but I decided if all the cool kids were eating them…..  So I ordered a double with onions and a small cheese fry.

Check out the amount of onion on this burger! 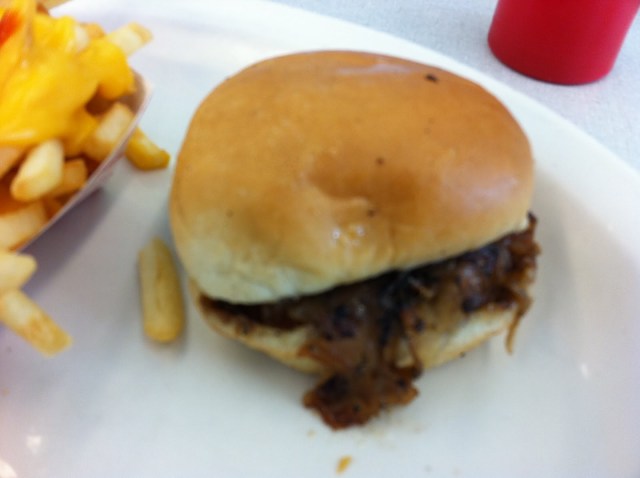 I’ll have to say that I can’t judge this burger fairly.  The onions were SO BAD, that even after I scraped them off, this burger still didn’t taste good.  It also was a little pink in the center – not the best sign when the patty is only an eighth of a pound. On top of that, the cheese fries were awful.  The fries themselves were bland and the cheese tasted worse than the sauce they pour onto nachos at the dollar movies.

The “best burgers” in Michigan were a disappointment, for me.

Leave a Reply to Motz’s Burgers – Detroit, MI « Burgers, Barbecue and Everything Else Cancel reply