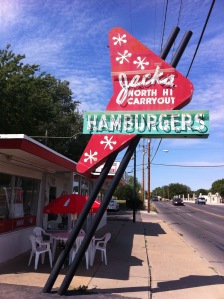 Last week, the answer to almost every question was, “I can’t. I’m going to Winfield.”  One of few the questions with a different answer was, “would you like a cheeseburger?”  “Yes, almost always.”

Starting our pilgrimage to the Walnut Valley Festival, we flew into Wichita.  Consulting the oracle at Hamburger America before we left, I had two destinations in mind.  The first was Jack’s North Hi Carryout.

Jack’s is located directly across the street from North High School, and we were warned to get there before the noon lunch bell range.  When we arrived (about 11:35), the place was empty save for a single soul ordering carry-out. 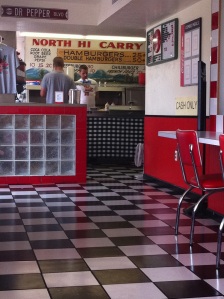 The story behind Jack’s is an interesting one – the place was owned by the by same two people, Jack at the inception / Norah subsequent to him, from 1951 until 2007 when a fire caused Norah to close its doors.  There were a couple of interim owners and then it sat empty.  Austin Herron (in the white t-shirt at the grill), a twenty-five year old who had wanted to open a burger stand across from his high school (a rival to North), bought it at auction and has the place up and running again.

I went with the cowboy burger (chili, bacon, cheese and barbecue sauce on a quarter-pound burger) with fresh cut fries.

It was, by far, the best burger we had on the trip.  The fries were crisp, but not hard, and the burger nearly perfect.  Look at that steamed bun!  Jo would have given her double burger a double thumbs up, if only she’d have had a free hand. 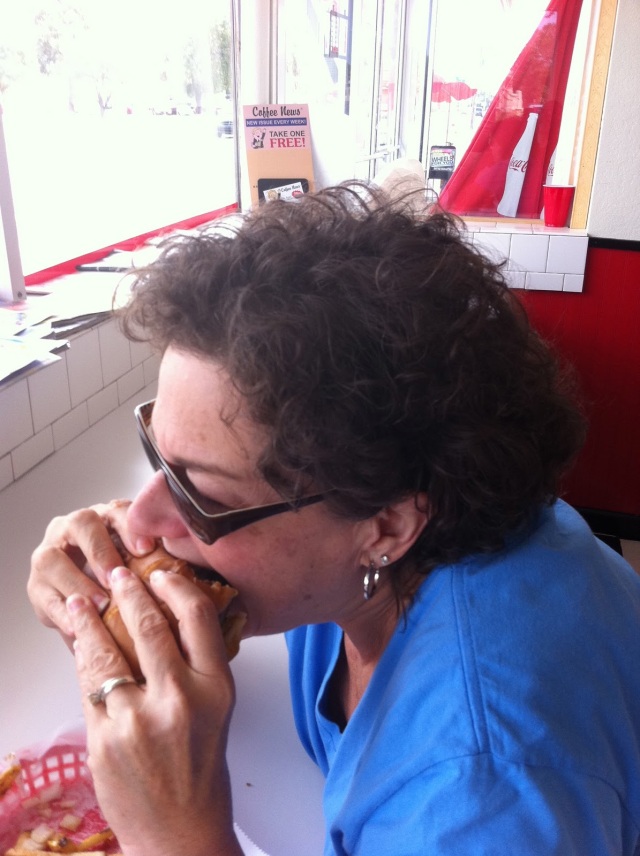 If you’re in the Wichita area, it is definitely worth a stop.