Over the course of my life, I’ve eaten at the Bar-B-Q House dozens of time, and I honestly don’t think I’ve ever eaten their barbecue (this visit was in February, 2012).  When I was kid, my dad took me to the Bar-B-Q House for “yellow jacket” hot dogs.  For barbecue, we always went to Wallace’s, in Austell.  If you’ve ever eaten at Wallace’s, you’ll understand why I grew up NOT liking barbecue.

So, how did yellow jacket hot dogs end up in Austell?  I’ve heard half a dozen versions of this story over my life.  The top two, in my humble opinion:

Story One: there used to be another drive-in near the Georgia Tech campus, in competition with the Varsity, called the Yellow Jacket.  One day (early 1960s), the owner closed for vacation (put a note on the door that said “gone fishin’) and never re-opened, supposedly bought-out by the Gordy family.

Story Two: Fred, of Fred’s Bar-B-Q House, somehow ended up with the chili recipe for the yellow jacket hot dog and took it to the exotic wilds of Austell.

Either way, Fred’s is about two miles north of I-20 on Thornton Road and looks like any roadside barbecue shack anywhere in the South.  (On a side note, if you were driving down Thornton Road and were looking for the sign above, it’s in the process of being replaced.   We drove by yesterday (5/5/12) and saw that the north side of the sign was missing and the south side is now white with a picture of a pig on it.)

When you go inside, they have basic counter service, full of barbecue items, but prominently featuring things covered with chili.  The “delicious” fried pies?  Fair, and very similar to those at the Varsity.

I consider myself, with thirty years of experience under my belt, as something of a Chili Dog connoisseur.  I love the dogs at the Varsity – they’re classic Atlanta fast food.  I’m a huge fan of the dogs at Martin’s – they’re really good.  (Truthfully, one of the best things about the dogs from Martin’s is that they also serve an incredible fried chicken sandwich.  You can get an “almost-Varsity” dog and an “almost-Chick-fil-A” chicken sandwich at the SAME TIME!)

This picture was taken pre-mustard.  (Weird note:  I generally hate mustard.  I prefer mayonnaise on sandwiches, and I order my burgers without it.  But mustard and ketchup is the perfect condiment combination on a chili dog.)  The bun is sturdy enough to toast perfectly and the chili is just the right mix of mild and spicy.

I honestly believe that the Chili Dogs at the Bar-B-Q House are the best in Atlanta.  If you like a good chili dog, you owe it to yourself to try one.

(And you have to appreciate a restaurant with a sense of humor.  Their t-shirts say “You Can Smell Our Butts for Miles” on the back.  That’s just plain funny.)

May, 2012 update – I went again a month or so back and decided to try something new.  I went with the pork wing. 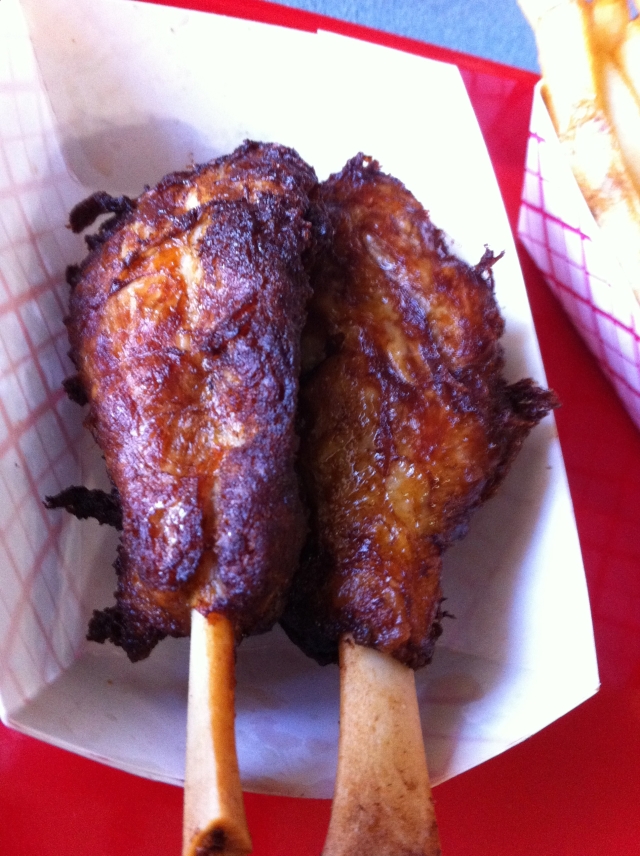 I guess they were trying to compete with chicken wings?  This is a short rib bone, wrapped in barbecued pork and then deep-fried.  Odd, but good.