I had learned about Rockaway Athletic Club from Hamburger America, and reviewed George’s article before we left home.   One of things that I remembered was the difficulty he had in finding the place.   I followed the map to the address from the Burger GPS app, but all we saw where the GPS directed us were two  unmarked brick buildings with armor-covered windows.  I turned in between the two buildings and it was then that we saw the sign that said “Rockaway Parking”.  In an empty parking lot.  Next to a dumpster.  Fifteen feet up in a tree…

We walked to the building on the left and saw that the street numbers were going in the wrong direction.  We turned back to the right and then saw the coca-cola sign on the doors to a dumpster area.   We walked around the back of the building and were greeted by this door.

How could we have missed it?  Little did we know that behind that door waited this burger:

When we got inside, we noticed two things:  The place was huge, likely seating three hundred or more, in four different “areas”; and there were now four people inside that didn’t work there (including us).  It was late, 2:45, and I talked with the bartender and she said that they had a fairly busy lunch crowd and an active student (University of South Carolina) crowd at night, but we arrived during “a lull”.  Lull had put it mildly.  We decided to start with an order of pimiento cheese fries – the waitress (on one of the few occasions when we saw her) that a single order would be sufficient for both of us. 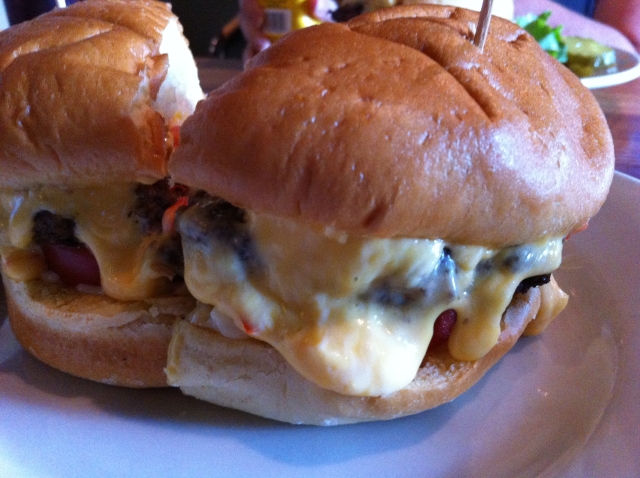 The burger was really good, but the service was just not good at all.  I don’t know that the meal was really worth all of the effort that we put into finding it.

Leave a Reply to FIG – Charleston, SC « Burgers, Barbecue and Everything Else Cancel reply