February 9, 2013 · by willoughbyandy · in Decatur, Everything Else, Georgia · 1 Comment 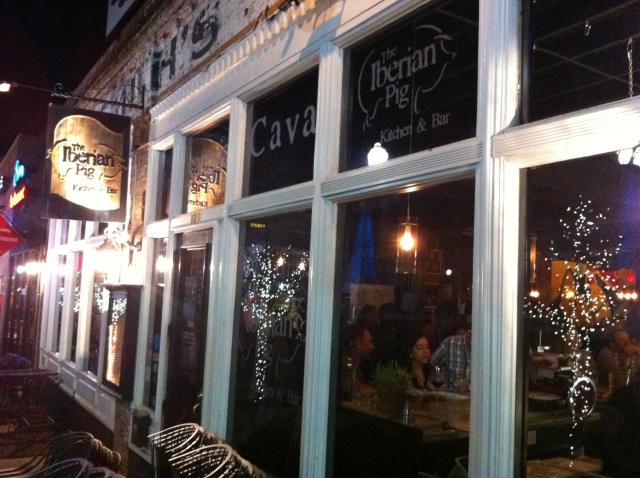 Note: I’m not usually one for reading diner reviews before I go some place, but the sub-90% from Urbanspoon and the low stars in Open Table through up enough of a red flag that I did some investigation, making sure there wasn’t a “food issue”.  You’ll see references to reviews below that I don’t usually make.

For the last year or two, I’ve heard much about the Iberian Pig.  When we were choosing a spot for dinner and looking for some place new, this seemed like the night for a visit.   We got delayed in traffic on Candler, so I called to let them know we were running about ten minutes late.  When we pulled into Decatur, four of us hopped out of the car while the other husband parked and we went into the restaurant.  I explained that we were about ten minutes late and they said that they’d seat us when the entire party arrived.  The host stand folks were not the friendliest with whom I’ve ever spoken, but they didn’t come off as “rude”, which I’d seen in several reviews.

I saw in several of the reviews that people complained about the extended wait, particularly when they had made a reservation.  One of the reasons we chose to eat early was to attempt to avoid that hassle.  I can see where that complaint could easily arise with any reservation later in the evening, based on what we saw up at the host stand, compounded by the timing and speed of service (more on that later).

Another primary complaint in the reviews related to the lack of waiting area – there was zero.  While we were giving our name at the host stand, we were both blocking the door AND standing at the bar.  Whether you were coming in or going out or waiting, you seemed to be standing in the way.  The entryway could use considerable revamping (in my non-space planner opinion).

We perused the menu and had almost made our choices when the server mentioned the special – a whole red snapper – and the ladies both selected that.

We started with the eponymous acorn-fed Black Iberian Pig, a breed indigenous to the Iberian peninsula, in three cured forms 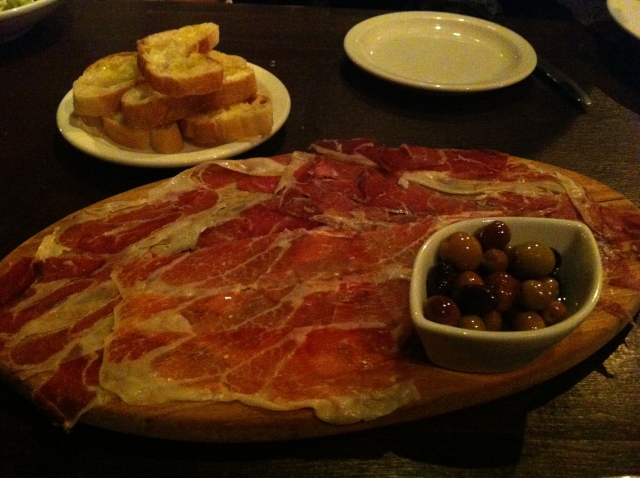 served with bread and olives.  The Paleto and Loma were both very nutty.  The Jamon was the tastiest of the bunch.  But none of them tasted significantly superior to most prosciutto.  There were also a couple of (non-pictured) salads at the table around this time.

For dinner, our driver selected one of the plates – 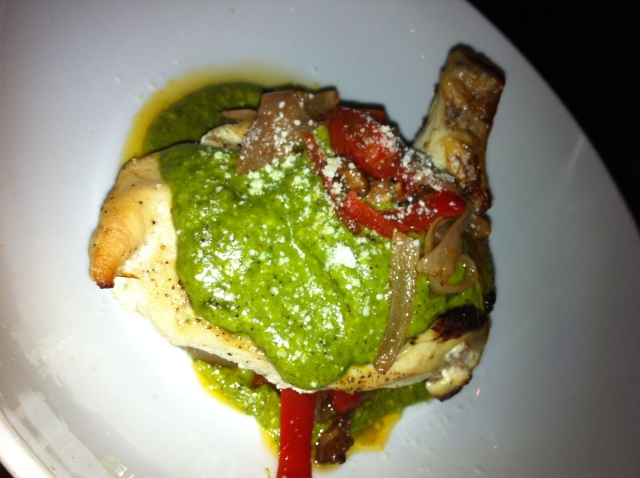 the T.I.P chicken (9 oz. Springer Mountain Farms airline chicken breast, stuffed with Jamon Serrano, Medjool dates and Mahon cheese, dressed with a pistachio pesto cream, and served with romesco rustica, and a blistered cherry pepper).  It was apparently very good, as all that was left in the bowl was the bone.

Our youngest and I chose to share four tapas (the descriptions are from the menu): 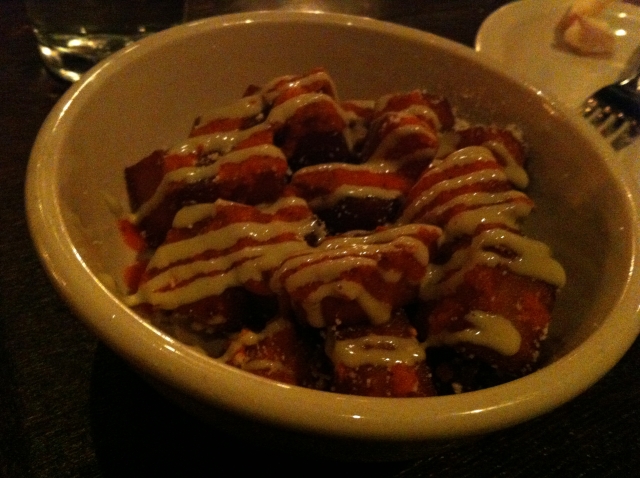 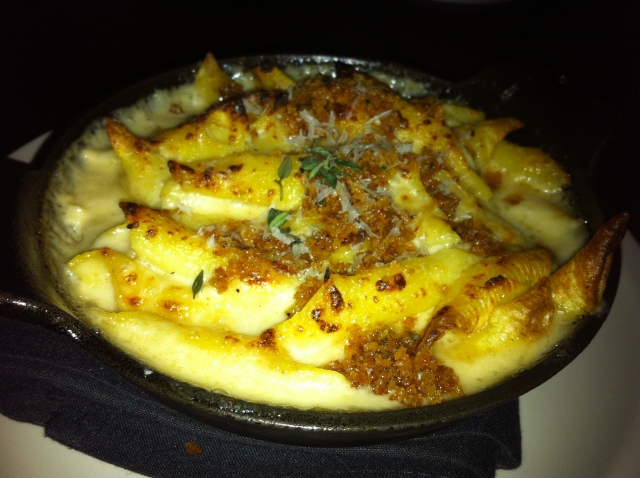 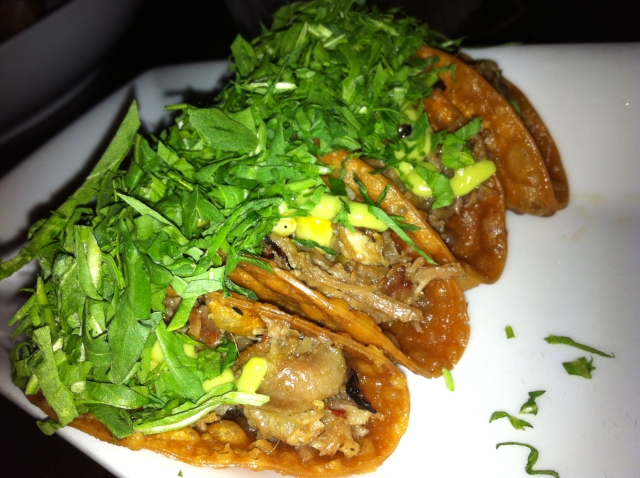 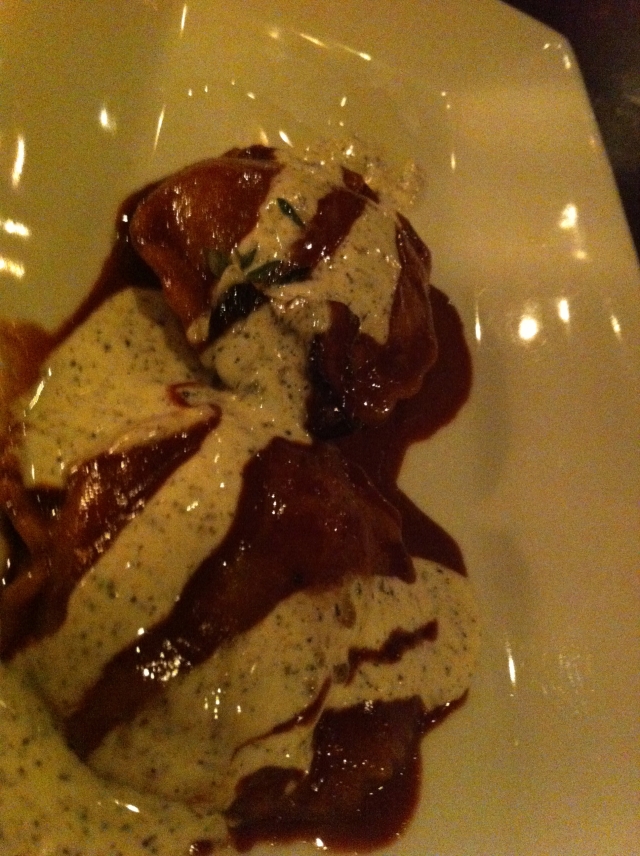 pardon the lack of light – we were discussing whether or not we needed a flash. I’m guessing “yes” in the future

Of the four, the tacos and the mac-n-cheese were the best – by far.  The tacos were near perfect, in both size and flavor.  The mac-n-cheese was excellent, with just enough pork to flavor it without over-powering the cheese.  I didn’t enjoy the ravioli in the least – a flavor in the filling (I’m guessing the truffles) that helped me decide not to finish those.  The potatoes were good, but nothing spectacular.

Here’s one of the red snappers and 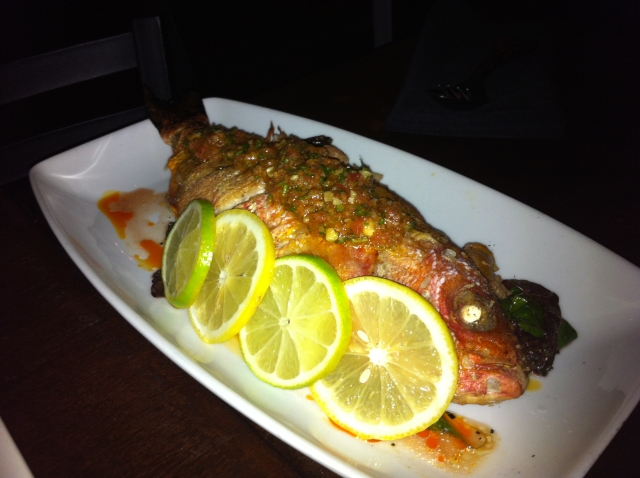 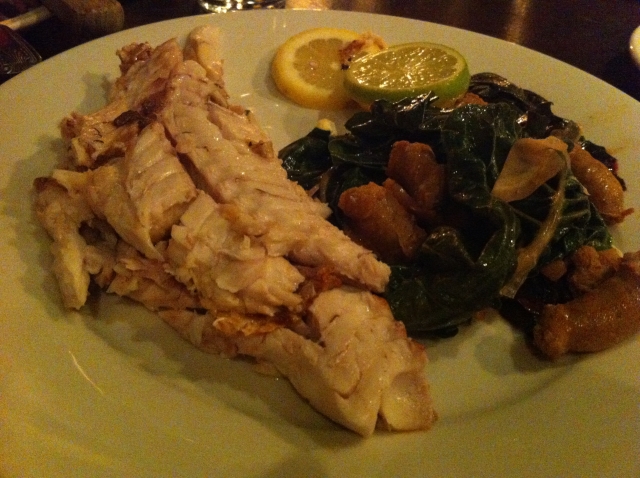 The food was fine – parts of it were very good – but the service, particularly the timing, was awful.  This was the other primary complaint in the reviews.  The order of the arrival of the food was:

Charcuteria, then salads, then a wait

Then our potatoes, then a wait

Then the chicken, the mac-n-cheese, tacos and ravioli, then a wait while most of the food gets cold

Then two whole fish that have to be fileted.

We were halfway through our tapas and the chicken was completely gone, before the fish was plated.  By the time the fish was served, it was cold, as were their sides.  It was difficult to judge the quality of the fish, but had it have been hot, it would have been the best meal of the evening.   And there wasn’t really a remedy available – they had ordered the last two and micro-waving that plate would likely only have made it worse.

Finally, our water glasses stayed empty a good part of the night.  I don’t know that it was our server, who was fairly hapless, or the kitchen, but the combo didn’t make for a good dining experience.  Combine poor service with the volume level (the place was loud) and I’m not rushing back.