As Saturday night was right around the corner, we were looking for a reasonable place for dinner with another couple, semi-close to home.  I consulted the oracle (open table) looking for a place in Vinings with a 6:30 reservation open and found a couple with availability at which we hadn’t eaten.  I did a quick check of the menus and decided on the Vinings Inn. 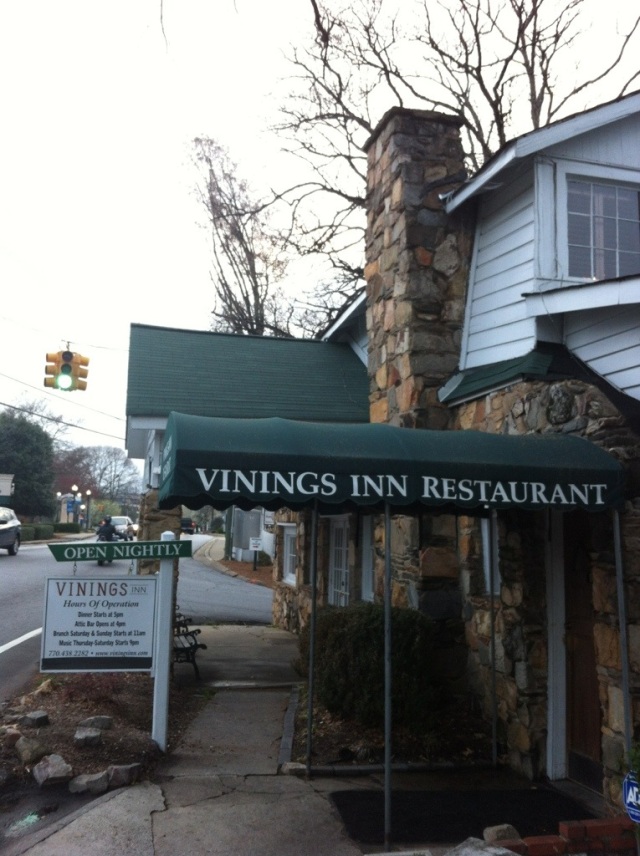 I have seen Vinings Inn (on that weird corner where West Paces Ferry turns down toward the river) for as long as I’ve been driving.  No surprise – the inn has been in that location since the 1880s, serving as a general store, a post office, a filling station and an inn.  It’s been a restaurant for as long as I can remember, but we’d never eaten there.

As this reservation was fairly early (later we would learn it was not_quite_early enough), we were shown into the dining room to the right of the main entrance, next to the outdoor patio.  This was a long thin room, seating maybe 40 at ten tables, ending in a room perpendicular to it, which seated another 25-30.  We were given a table for four at the third table from the back, by the patio.

Looking at the menu, I decided on the fried chicken, which was served with grits and brussel sprouts. When I ordered the chicken without brussel sprouts, our waiter (who hadn’t been particularly excited when we only ordered water) didn’t ask if I wanted a substitution.  Note: I found this odd, and I did mention it to Jo.

And then, the party of twelve arrived and were seated in the left corner.  They were late twenty- and early thirty-somethings, dressed for something (ties and heels – not on the same members of the party, thankfully) and started with a couple of bottles of wine.  The surly waiter, whom we shared with them, was suddenly very pleasant.  Toward them.  The bread arrived, along with a salad for one member of our party.  Jo asked the waiter for more water – her glass was half empty.  He brought back the pitcher, filled her glass and walked away (failing to notice my glass which was emptier than hers).  A few minutes later, as he walked to the other table, my dear wife said, “sir”, and he walked on by without turning towards us.  By this point, my glass is empty.  Four or five minutes later, the same thing happens.  Four or five minutes later, as the party of twelve is getting appetizers and progressively louder, he is walking toward them.  I am holding my empty water glass above my shoulder, out in the aisle.

Jo says, more loudly, “SIR”, and as he comes over to our table she is explaining, politely, that my water glass was also empty.  I, on the other hand, am ratcheting rapidly towards full jackass mode. He tells her that he didn’t notice that my glass was empty.  I wanted to yell that the reason he didn’t notice is because he didn’t look.  She explains, still politely, that even though we weren’t buying wine we deserved more of his attention.  Preach it with kindness!

A bit later, the food arrives. Somewhere during our meal, the door between our room and the one behind us closes.  I begin wishing for a door between our table and the next.  My chicken arrives: 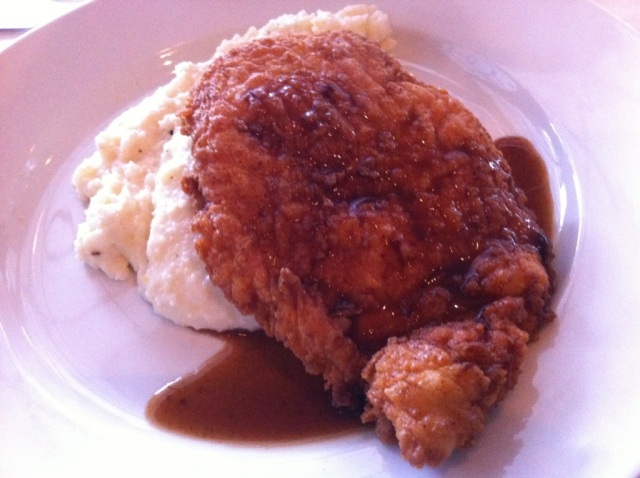 It was perfectly fine.  But not what I expected.  Or what I thought that I ordered.  I ordered “buttermilk fried chicken, stone ground cheese grits without southern style brussel sprouts.”  Thank God that I didn’t get the sprouts, but I got a chicken cutlet, with a red wine sauce on grits, where I didn’t taste a bit of cheese.  Had the description more closely resembled the dish, I likely wouldn’t have ordered it.  Jo ordered the fish, 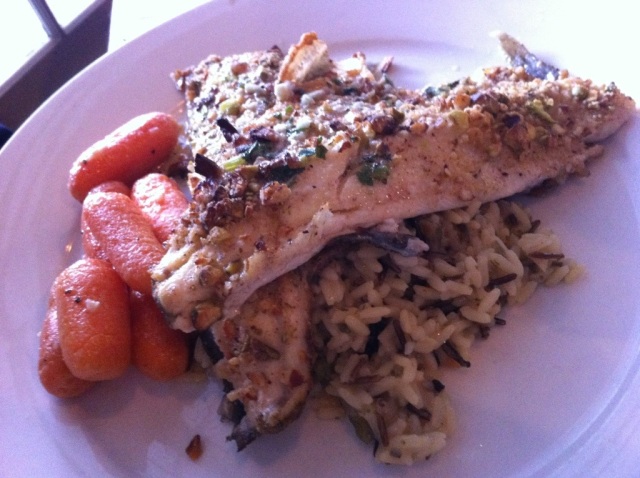 a pistachio crusted trout, with lemon butter sauce, baby carrots and wild rice pilaf.  It looked like what she ordered when it arrived and apparently tasted like it as well, as she cleaned her plate.  Meanwhile, the party of twelve has began scattering their conversation with loud profanity, causing several tables (including ours) to glare at them.  They’re oblivious.  We’d already decided that we were going to Yoforia for dessert, when the waiter (who has been much nicer since my beloved confronted him) explains that he’s comping a couple of desserts.  Okay, we’ll eat dessert here.  We decide to share the blackberry cobbler 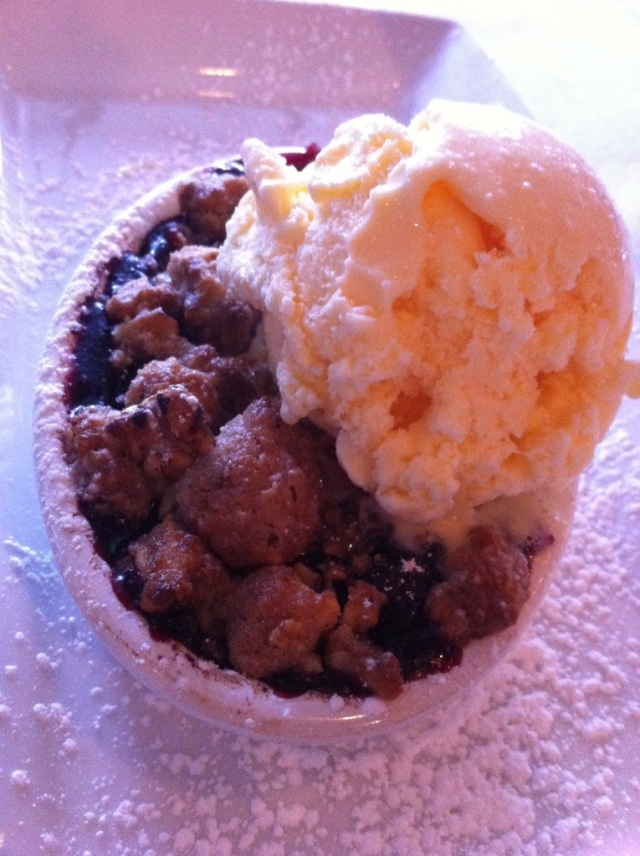 which was okay, but not great.  The blackberries were good, the ice cream better, the cobbler worse.  Our dinner companions had the apple pie, which was, according to discussion in the car (it was too loud to discuss during dessert without yelling – which was okay for them, but not for us), lacking in apple.  Over all, the meal was good, but not great.   And there are several excellent places in Vinings that I’ll go to again before I return here.