What an appropriate question!  After an afternoon meeting in Jesup, I was heading back towards Savannah when I passed the barbecue place that I hadn’t seen until AFTER lunch.  Since it had been almost three hours since I’d last eaten, I thought it would likely be okay to stop for a snack.  When I walked up to the window, which was surrounded by the menu, 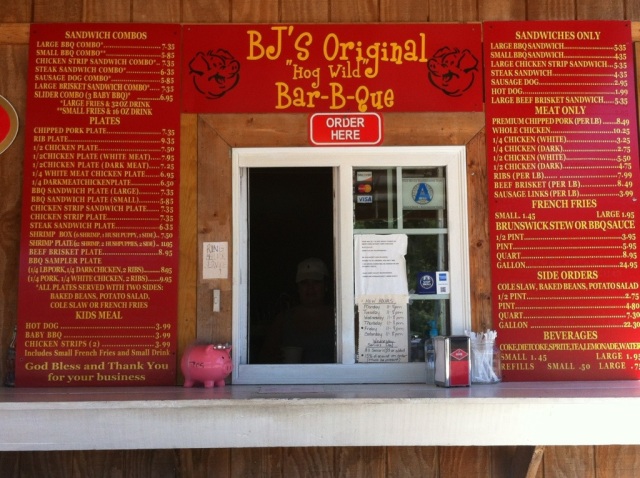 I  noted that at the top right, the menu simply says “barbecue sandwich”.  I didn’t need to ask what “kind” of barbecue it was.  Barbecue equals pork.  Period.  I decided on a simple barbecue sandwich.

“Can you tell me what’s in your sauce?”, I ask innocently.

The sweet young lady at the window replied, “No, I can’t.  It’s a secret.  Only three people know and I’m not one of them.”

I try another tack. “Can you tell me how it’s based?”

“Is it mustard-based? Or tomato-? Or vinegar-?”

Right in the middle of the three, preference-wise for me, but a barbecue sandwich it is then.  To go.  When I opened it up in the car,

you could smell that mustardy smell, mixed with smoke.  The sandwich appeared to have been pre-sauced, with more sauce added when it was placed on the bun.  The sauce was very smoky, but good.  In fact, my beloved (whom I offered a bite) seemed to enjoy it quite thoroughly.  The sandwich was fairly sized, stuffed with pork and fairly priced.  Next time, I’ll have to try the brisket, where I believe that a mustard-based sauce tastes best.