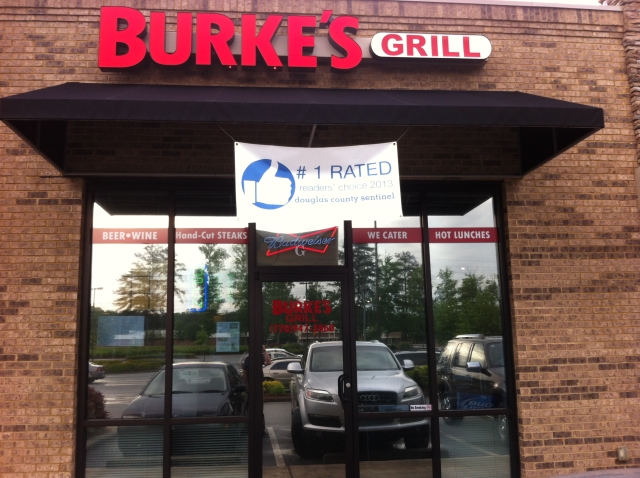 As we get ready to kick off a food weekend, for Friday night dinner we were looking for someplace that met three key criteria:

2) local (we would be in the city on Saturday and Sunday); and

One of the issues with where we are in the ‘burbs is the lack of new or different restaurants.  There are a couple of quality local places plus all of the chains, but rarely do we hear about a new place, particularly one that is recommended by others.   One of the couples that we dine with regularly told us that they had been to Burke’s Grill recently and “for Douglasville, it’s good.” 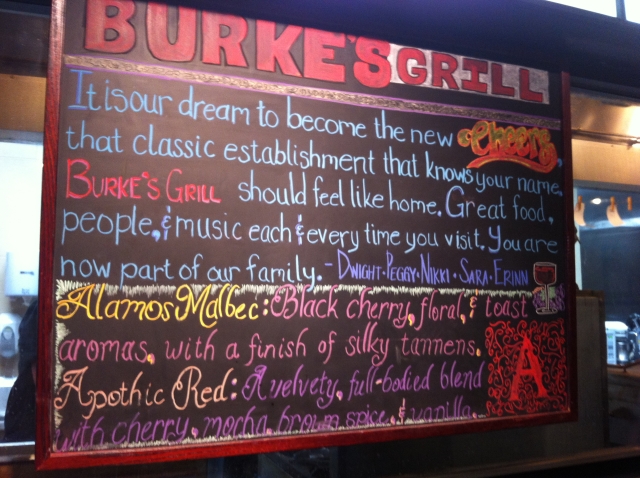 As we were discussing going, Jo suggested that we call and invite some friends who live on that end of the county to join us.  A time was set (6:30) and we headed out to meet them.  When we arrived, they had already been seated, next to the sign above.  The place is clearly family run and from reading the menu and listening to the manager, the chef / owner / father / husband influences the menu strongly with a New Orleans bent.

They had ordered a shrimp bruscetta appetizer, which w 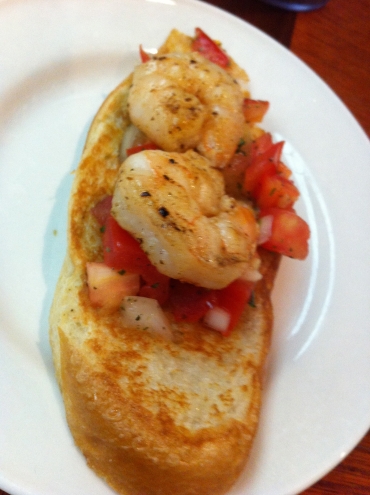 as not complicated, but was good.  The onions and tomatoes were diced finely and covered in a thin layer of vinegar , topped with shrimp and served on toast.

The downside to the restaurant was the  service.  It was quirky, at best.  The young man that waited on us was not particularly gregarious – he was actually much closer to timid.  At one point, I think the couple with us hurt his feelings when they didn’t want any more water.

I noticed that they had poutine on  the menu as an appetizer, although they didn’t call it that (it was listed as french fries with cheese and gravy).  When I asked about the poutine, he looked at me like I had a third eye in the middle of my forehead.  I asked our server if the french fries were fresh or frozen.  He didn’t know – I could see in the kitchen, they were pouring them out of a bag.  I asked what kind of cheese.  He didn’t know.  “Cheddar?”, he volunteered.  I passed on that.

And then a young woman came to the table and asked if we had any questions about the menu.  We said that our waiter was doing fine with explaining it and that’s when she went on to explain  that she was the manager, she knew all about the menu, and that her father (the chef) had raised them in New Orleans.  Many things began to make sense.

We asked about the shrimp and grits: is the sauce tomato based?  Or like a gravy?  She explained that it was cooked with the “holy trinity of New Orleans cooking – butter, cheese and wine.  You can never have too much wine.”  Justine Wilson carried that attitude off pretty well twenty years ago on public television.  But to hear a girl who looks like she might be eighteen (I’m sure she was older) at best say it is, at best, off-putting.  Jo went ahead and ordered the shrimp and grits 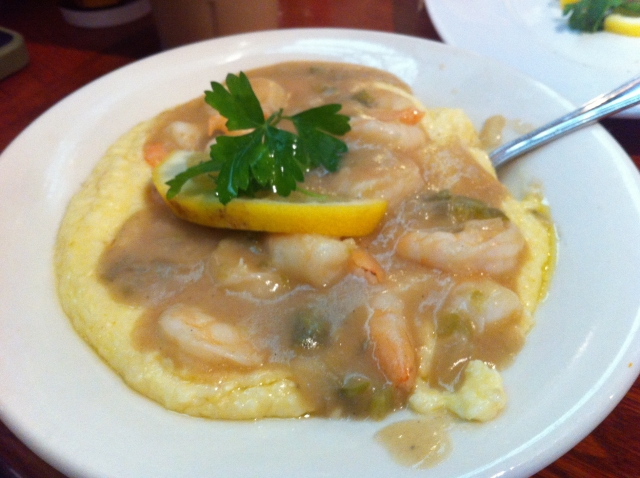 The presentation was unusual (topped with a lemon slice and parsley) and the grits tasted heavily of the wine, but they were good.  Not much like the shrimp and grits that I prefer but Jo enjoyed them.   I ordered the fried chicken 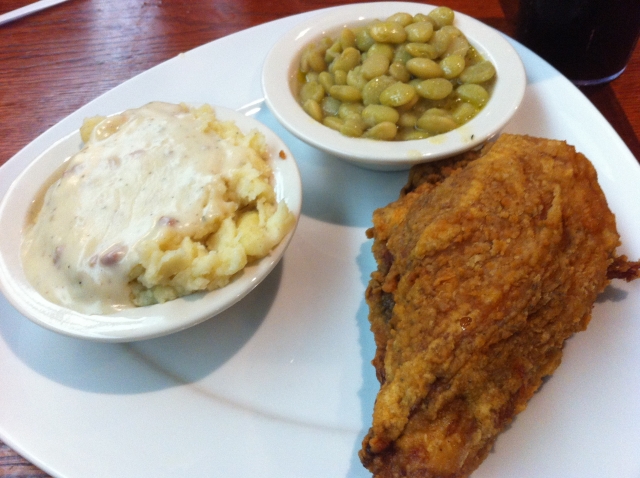 with mashed potatoes with white gravy, lima beans and sliced tomatoes.  But back to the service – the shrimp and grits and the fried chicken arrived, along with one of the other couple’s meals, at the exact same time as the salads that the two ladies had ordered.  The waiter, noticing our look of consternation at everything arriving at once, said “sorry”, tucked his head and left.  Nothing more was said.  And then about five minutes later the other meal arrived.  The sliced tomatoes never did show up.

My fried chicken was fine – not great.  The crust tasted of peanut oil and the meat was neither moist or dry.  The lima beans were very good.  The mashed potatoes appeared to have been made from a mix.  We saw some roasted lemon chicken coming out of the kitchen as we were leaving that looked tasty.

There is definitely promise here, but for us to make more  than one return trip, there will have to be much better service on the second visit.