I’d been wanting to try Grand Champion BBQ, since I saw them listed in Atlanta Magazine’s May, 2013 barbecue issue.  When we were discussing lunch today, I was reminded, as was my dearest, of last year’s 4th of July rib debacle where we struck out in 4 places (The Old Brick Pit, Heirloom Market, Thompson Brothers and Jim-n-Nick’s – yes Jim-n-Nick’s ran out of ribs by 6:30 last Independence Day. The entire experience is detailed in the footnote to this post).  At her urging, I called to see if where I wanted to go (Grand Champion) was open:

We headed from downtown toward Roswell, and got there just before the rain arrived.  GC BBQ (as it says on the marquee) is located in a Publix shopping center and were doing a brisk carry-out business when we got there.  As you walk in the front door you are face-to-face with the counter above.  Once we figured out where to order (not at the “Order Here” sign, but rather at the cash register), we contemplated our collective plan.  Jo ordered a half slab of ribs (she agreed to share one of them with me), with slaw and baked beans. 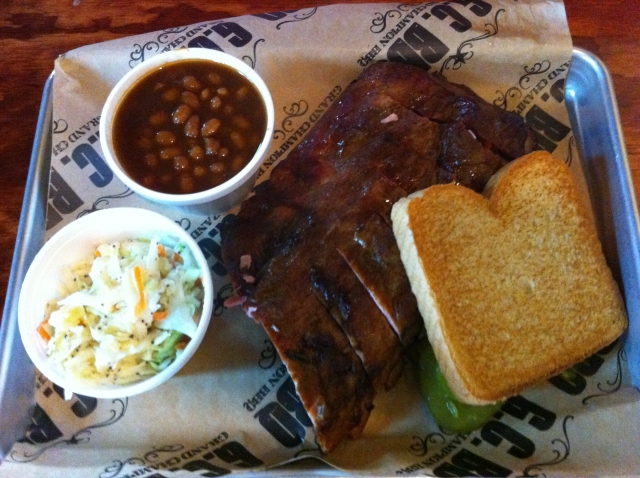 The ribs were served dry, very meaty and the meat pulled cleanly from the bone.  While we waited for our food (about fifteen minutes), I watched the kitchen and I was amazed at how easily one of the men in the kitchen was slicing the ribs.  He was using a knife like a cleaver and appeared to be chopping the ribs perfectly with the ease you’d see from someone welding a cleaver and chopping pork.

The two sauces on the table were accurately described, one a thin vinegar North Carolina sauce, the other a thicker, sweet tomato based sauce.  We both used the sweet sauce as a dip for the meats.

I went with a two meat combo platter with brisket and pork, with mac and cheese and Brunswick stew.

As soon as you taste the mac-n-cheese you can trace it’s provenance back to Sam & Dave’s.  Multiple cheeses covering ziti noodles, baked to a hard crust on top, served in a pool of melted cheese.  Wonderful.  The Brunwick stew was a bit of a contradiction – the stew itself was very thin but it was full of gobs of finely chopped pork.   This was definitely the meatiest stew that I’ve had in a while, with corn being the only vegetable I recall in any abundance.  In my years of barbecue ordering, I’ve never been asked which meat I wanted more of in a combo, until today. 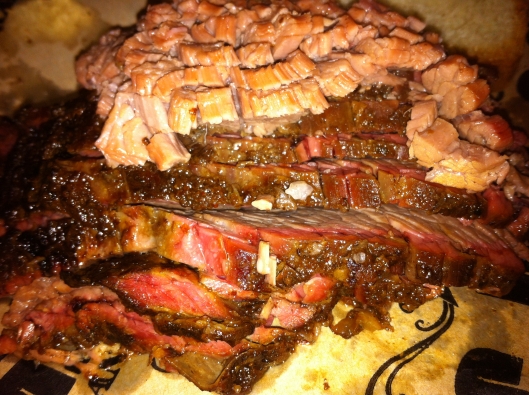 I chose brisket as the predominant meat and you can see that I have several slices of brisket underneath a smaller stack of chopped pork.  The pork was very good, the brisket was better.

The whole time that we were there, the carry-out business kept a-rolling.  I even saw a lady in line picking up two racks of ribs who was extremely prepared – she had two refrigerated reusable grocery bags.  I had intended to try one of their home made pies, but they had none for the holiday, just banana pudding.   We passed on that, this time, but I imagine I’ll be back and give the dessert a try on that visit.