In last year’s Spring Dining Guide in the AJC, Umaido was listed.  That was the first and only mention I had seen of it in the last couple of years, but they were still on one of my “lists”.  Looking for adventure on a Friday we ended up heading in that direction.  Just getting to Umaido was an experience in itself.  The directions on Google led me to a shopping center on Lawrenceville-Suwanee Road.  The parking lot entrance had a Super-H Mart on the left (if you aren’t familiar with Super-H, it’s like a giant Asian grocery store which often has a food court inside) alongside a couple of shops.  To the right there was a two-story strip mall with a bunch of shops, on most of which the names were written in Asian letters.  I drove by both of them slowly and didn’t see the name.

I resorted to the phone.  I asked the young lady who answered where they were located and she passed off the phone.  The young man who took the call said to look for the giant chopsticks.  I couldn’t see any giant chopsticks (they ended up being by the door, in the picture above, which was blocked by a column from the direction I was driving.)  I asked if they were near Cafe Mozart (which I could see) and he didn’t know.  Then I saw a teen-aged Asian boy with a Yankees hat on in the parking lot, with a cell phone to his ear and we both realized that I was talking to him. 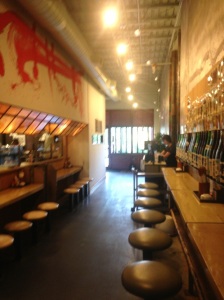 This picture is looking back toward the front door from the middle of the restaurant, and you can see that both sides are lined with bar stools.  There was also a large high-top bar in the back with stools on each side (below), taking up the right two thirds of the back of the restaurant.  There were a few tables along the left wall and we were seated at the one in back corner.

Clearly this place is designed for folks to come in and grab their ramen in a communal atmosphere.

When I think of ramen, the first thing that comes to mind are the packs of noodles off which many college students and full time musicians subsist.  Umaido’s ramen visually resembles the six-packs-for-a-$1.00 that you can get at Piggly Wiggly about as much as a fine brick oven pizza resembles a frozen Totinos.  Nominally, they’re the same, with some basic common elements, but with a much more refined execution and better ingredients.

I went with the ultra spicy ramen (level 1).  The menu lists levels 1, 2, 3 and ?, but on the back of the lunch menu, they mention Event 2 – if you finish a bowl of Level 100 ultra spicy ramen within seven minutes, it is free. 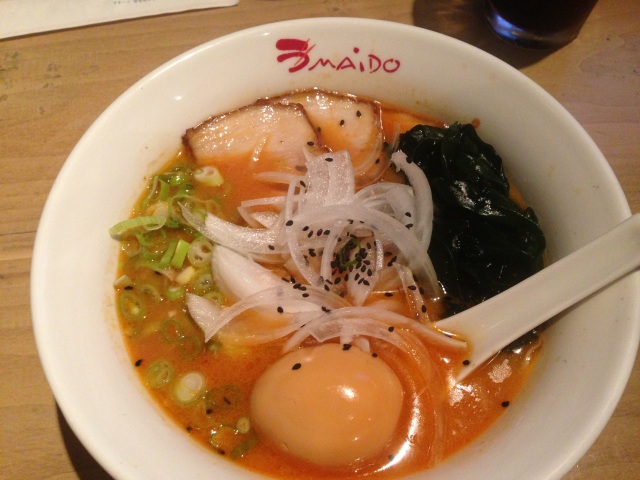 The ramen was comprised of tonkotsu broth (made from pork bone), chili oil, seaweed, onion, bean sprouts, sesame and scallions with slices of roasted pork and 1/2 of a hard-boiled (it wasn’t really hard-boiled – the yolk was still gooey).  Level 1 was fairly lively – the spicy-men was red with chilis and the sauce had quite a kick to it.  Level 100?  Who are they kidding?

For lunch you can order it with a “Set” for $3.00 in addition to ramen, which includes the side and edamame.  I chose to go with Set 3:

Tori Kanaage Don (Japanese fried chicken over rice).  The chicken was boneless and a little spicy and the green stuff was seaweed.  But it was sweet.  I asked the waitress if it was seaweed.

“Is it pickled? Or something else?”

This was obviously the young lady that answered the phone.

I took the rice from the Set and threw it into the bowl with the ramen – it was very good.  The chili sauce in the ramen soaked into the rice and made for one delicious dish.