For the past seven plus years, about once a month, we’ve eaten lunch at Chin Chin Seven, on Sugarloaf Parkway.  If you aren’t aware, Chin Chin is a Atlanta franchise, currently with nine locations.  Then one day, when we went for lunch, the name had changed to Five Spice Asian Fusion.  We didn’t know what that might portend for the food.  It had always been fine – we hoped it wouldn’t get worse.

It turns out that there wasn’t much need for worry as everything looked almost exactly the same, although the modern-looking wine racks (on the left wall below in the picture to the right) were new.  Nothing seemed very different.  The tables were the same – the chairs were the same.

When I checked out, even the credit card machine thought that I was still at the same place (Chin Chin 7) – even Danny was still there (I thought our waiter looked familiar).  But some things had changed.  The menu looked new – and now they had APPERTIZERS! 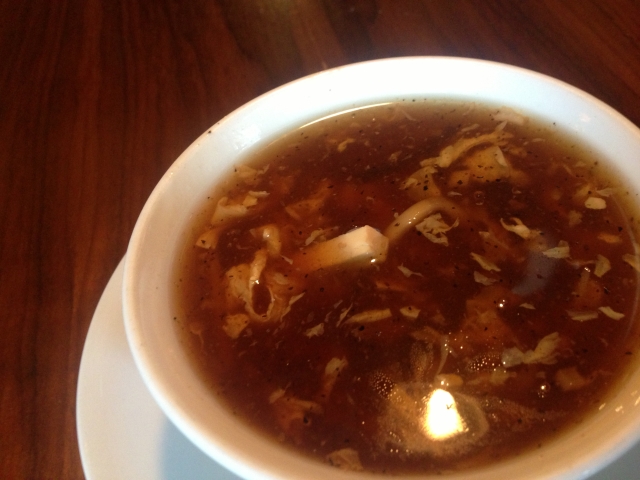 On this day, I had the big bowl of soup (“Could you put it in a big bowl? – We don’t have big bowls. – All right. Just give me a cup of decaf. – We have Sanka.”)  Their soup is good but not great.  That’s always been the litany of this place – good, but not great.

And today I followed the soup with  Mongolian chicken,

a simple dish of grilled white meat chicken, which I ordered without the green onions.  I alternate between the Mongolian and General Tso’s chicken.  I do think that if the General Tso’s were made with white meat, I’d order it all of the time.

It’s not the best Chinese food, by far (and I said this before I ever went to Tasty China), but it’s an okay spot for lunch.  At least for once a month <g>.

FWIW – One of my co-workers is a big fan of their sushi, although I’ve never tried it.  And they do have daily sushi and bento box specials.