Only open about a month, the Smoke Ring caught my attention when I saw a new billboard for it on Northside Drive, just south of Hollowell Parkway.  The name didn’t ring (pun unintended) any bells – I had seen nothing about in any of the food press, that I recalled.  At the very end of Nelson Street (behind the Southern Railway building and across from Fire Station #1), in the Castleberry Hill neighborhood, finding it proved to be a challenge for me.  I drove on the wrong part of Nelson Street and then circled and circled before finding it.  Parking is either on the street, or in the (really rough looking) $1.00 an hour lot across the road.

Atlanta based 101 Concepts (owners of Food 101, Meehans and Cibo e Beve) took over this former JR Crickets.  Then they re-designed the place to be a “new take” on Georgia barbecue, specifically for executive chef Jordan Wakefield, who was at the helm of the midtown Meehan’s, at the time.  In an interview with Atlanta Magazine, Wakefield said:

“Most places in Georgia have the relaxed atmosphere but stick to the basics.  There’s not one place where you can get the best brisket, best ribs, best pulled pork, the best Brunswick stew, and the best sides.  It’s a goal of mine to pull them all together and have them at my own place.” 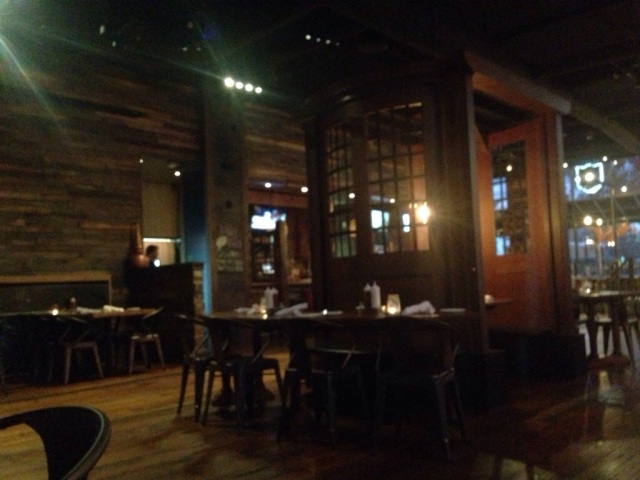 The interior looks great, with floors from an old cotton mill in South Georgia and brick and wood covering the walls, all topped off with a re-purposed phone booth as a centerpiece.  And they’ve done a lot of work on the menu, trying to not be a “typical” barbecue joint, as Wakefield says above.  In one review I read, they refer to the menu as “gastrocue” and that seems an apt description.

When I was discussing the choices with the server he explained that they were trying to do a different take on barbecue (his example of an interesting turn on a sandwich was adding pimento cheese to pulled pork) and I guess the barbecued wings would qualify on that front.  From a pure barbecue menu POV, they reminded me of Fox Brothers.

The omnipresent deviled eggs and fried green tomatoes give a nod to their desire to be a “Southern” restaurant, but the more adventurous side of the menu, with a bacon wrapped kobe beef hot dog or crispy pig ear fries, echoe the sensibilities of Food 101.

I asked the sever for suggestions and he said that the brisket was very good.  And that the wings were very popular.  After contemplation, I decided on a combo of brisket and wings, with a side of the corn on the cob. 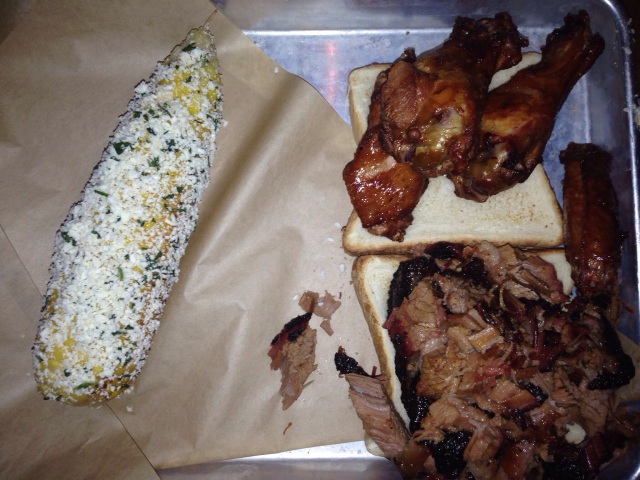 The corn is grilled in the husk, then shucked and rolled in cotija cheese (described as a Mexican parmesan).  It was very salty and very cheesy, with very little corn taste.  It’s definitely a different take, but I’ll choose a different side next time.  The chicken wings were smoked, then flash fried and had a great smoky flavor. 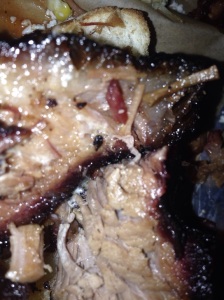 The brisket was served dry and had a beautiful smoke ring.  What else would you expect with the name of the place?  But when you took a bite of any size, it became very dry very quickly.  Slathered in sauce, this wouldn’t have been an issue, if you were eating it as a sandwich.  But I was eating the brisket, alternating with dipping the lightly toasted bread in the sauce.  When I asked what kind of wood they were cooking on, I was surprised to find that it was “some kind of pine”, this week.  And that it apparently changes on a regular basis, using whatever is available.  This is the first barbecue place I’m aware of that is agnostic as to the type of wood used.

They have two sauces on the table, a red chili sauce and a white mayonnaise based sauce.  The red sauce was a little thin and not too hot.  The white sauce was good and a welcome surprise, as there are less than five places in the metro area that serve this northern Alabama sauce variation. I asked it the chef was from Alabama and was told “no”, but this was part of his plan to develop a Georgia style of barbecue made from an amalgam of other influences.

As I was leaving, I saw this fabulous back wall

and stopped to take a photo.  I really liked the look of the place.  And although slightly pricey, ($14.00 for a two meat – not including ribs – with one side combo), I’ll gladly try it again.  The server said that business was starting to pick up.  I hope it goes well for them.