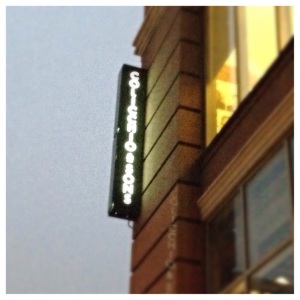 As we were taking a break from wandering in the snow on Saturday, I began looking for a spot for dinner.  When I sorted the available options on OpenTable by “ratings”, I saw that Colicchio & Sons had a reservation available at 5:00.  As restauranteur / chef Tom Colicchio is the mastermind behind one of my favorite restaurants of all time, Craft (which regrettably closed their location in Atlanta a couple of years ago after an issue with their landlord and at whose New York location we ate earlier in the year), and I’d heard so much about this restaurant itself, it was an easy decision.

On a side note: We were concerned about possibly being under-dressed as we had packed a single bag for the trip, preparing for traipsing in the snow, but there was no “stuffiness” at all to the place.  We saw several other couples in jeans.  And several dressed to the nines.

Located just across Tenth Avenue from Chelsea Market (the red wall you can see through the window), between 15th and 16th, the three year old restaurant has constantly received accolades as one of the best restaurants in NYC. 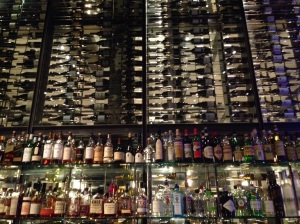 Arriving early (shortly before they technically opened – a nice young man unlocked the door to let us in from the cold), our coats were taken and we were seated at the bar.  We had a chance to look around while we listened to the kitchen give last minute instructions to the head waitstaff.  These “behind the scenes” moments often portend what is to come.  The tone was pleasant, not dictatorial, and after about twenty minutes we were shown to our table.  As to atmosphere, it wasn’t so dark that you couldn’t read the menu and it seemed they had raided the jazz playlist on my iPod – Brubeck, Weather Report and Getz/Gilberto.  The music was a perfect accompaniment to the meal.

The menu is composed of three sections: a four course price fixe; first, second and third courses; or the chef’s seasonal selections (a seven course price fixe).  In looking over the options, we were considering going the price fixe route, but were having a problem with a choice on one of the courses.  When Thanh, our head waiter, came back he made the decision easy for us, telling us that anything on either of the price fixe options could also be ordered as an individual course.  Then he asked if we had any food allergies (happily, no), answered some questions about a dish Jo was interested in, but decided against (salted celery root with hen of the woods mushrooms) and took our order.

To start, the chef sent out a couple of trays of canapés.  The first contained (left to right):

The second tray was (left to right): 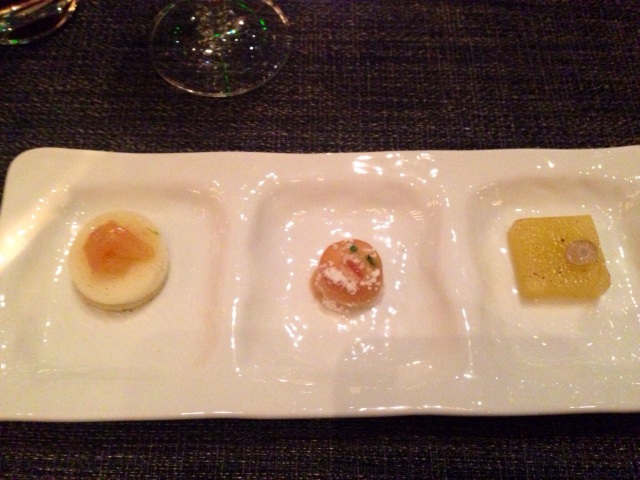 What a wonderful start.  Then this fabulous tray of amazing Parker house rolls arrived.

They were piping hot, with what I believe to be sea salt on top and fresh butter.  We both had one.  Then I had another.  And, when they said they’d be bringing out some fresh rolls, I had a third.

The service, throughout the night, was flawless.  I was sitting with my back to the main dining room, but I was constantly feeling the breeze of a server passing by me.  Jo said that they were like a birds, constantly flitting about.  Every course arrived with two servers, one to slide the dish in over each of our left shoulders.  They were often shortly followed by Thanh, or on one occasion the manager, stopping by to assure that everything was to our liking.

We started with first courses, a golden beet, saffron yogurt, Sicilian pistachio and grapefruit salad, which appeared to be very much enjoyed.

When only three of the medallions were eaten, we were quizzed to assure that there was nothing “wrong” with the dishes, and an implication that, if there was, something else would be brought out.

I had a D’Anjou pear terrine and mangalista ham salad with crones (also called Chinese artichokes) and radicchio.

This was one of the options from the four course meal that I ordered as a starter.  The pears appeared to have been scooped with a melon baller, and were topped with slices of the ham and radicchio, along with the crones.  I don’t know that I’d ever had (or even heard of) a crone before, but it very much had the texture of the tuber family to which it belongs and an earthy taste.  Not caring much for radicchio, I did try it, but found that it added nothing to the dish.

Somewhere along the way, Jo had mentioned that we were celebrating our 26th anniversary in NYC and our server returned with another dish from the tasting menu (which we hadn’t ordered),

On to the main course, as I mentioned earlier, there was question about the celery dish because it contained hen of the woods mushrooms, but the chicken with blue foot mushrooms (described as meaty mushrooms, like a porcini) was decided upon.

It arrived as five large medallions (and a rolled up something – also chicken), in a black truffle sauce with wheat berries and blue foot mushrooms.  One of the slices (along with the rolled up something) were given to me and it was excellent.

I was having a hard time deciding between the suckling pig from the menu, and two of the courses from each of the price fixe options – a venison loin and rabbit.  After asking an opinion (“get the rabbit”) and getting a further description of the venison (it was served with salsify – a celery like vegetable), I decided on the rabbit.

It was prepared as a roasted roulade, with pork sausage, served on a bed of chard, with a garlic confit. The recommendation was dead on – I can’t imagine either of the other dishes being any better.

We were way too full for dessert, but a young lady on the waitstaff came and chatted for a few minutes.  Shortly, a dessert canapé tray was brought, containing a caramel and banana chocolate bark, caramel popcorn and a small shortbread cookie with honeycombed chocolate.  Then this plate appeared

with their house opera cake with espresso ice cream and a message in chocolate.  The ice cream was strong with espresso, but we shared it thinking somehow we’d dilute the caffeine in some way by splitting it.  When the bill was delivered, he also sent us home with two gingerbread muffins for the morning (and, after asking if we had a dog, some house-made dog biscuits).

The entire night reminded me of that show from a few years back where the chefs competed and the final round’s competition was to create the perfect spoon.  The different ingredients were put together to create a culinary gestalt that far exceeded the singular taste of any components.  That describes each of these dishes – they looked interesting on paper but they tasted like little bits of heaven.

I don’t know that we’ve had a week in a long time with two wonderful meals so close together.