I had eaten at Burnt Fork BBQ previously, a couple of years ago with some friends, but never got around to posting a review.  Tonight, when heading towards Decatur (originally with another destination in mind, but being delayed by traffic) I realized where I was and ran in to grab some barbecue.  In what may be the strangest discovery recently, I’ve now found a vegan friendly barbecue joint.  When a place has smoked barbecue tofu, lists their sides as vegan friendly and proclaims the sauces to be both gluten-free and vegan, this is a place to know about when you are asked about vegetarian-friendly restaurants. 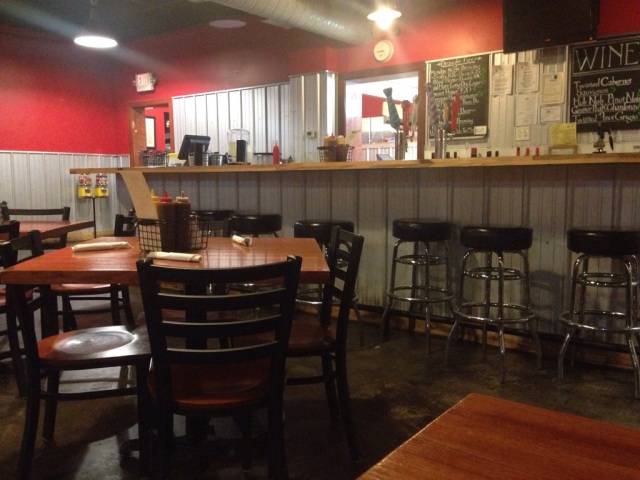 Located in a strip mall with a dry cleaner, near the corner of Church Street and Commerce Drive, it is sparsely decorated.  And it was sparsely populated, as well, when I arrived.  There was, however, a multi-generational table seated in one of the corners.  I took a spot along the back wall and took a look at the menu.  A little too close to that group.

[Rant on] Maybe it’s just because we had our kids so young, but we expected our kids to behave we went out in public.  What is it with these forty somethings who allow their young children to sit at a table and scream all their answers to them (with little respect shown in their content and less showing in their volume)?  There’s little more annoying than a precocious four-year-old with an indifferent patent.  [Rant off]

Back to the food – I ordered a rib combo plate, which is a quarter slab of ribs with pulled pork (after asking the server whether she prefer pork or brisket) with two sides – fries and Brunswick stew. 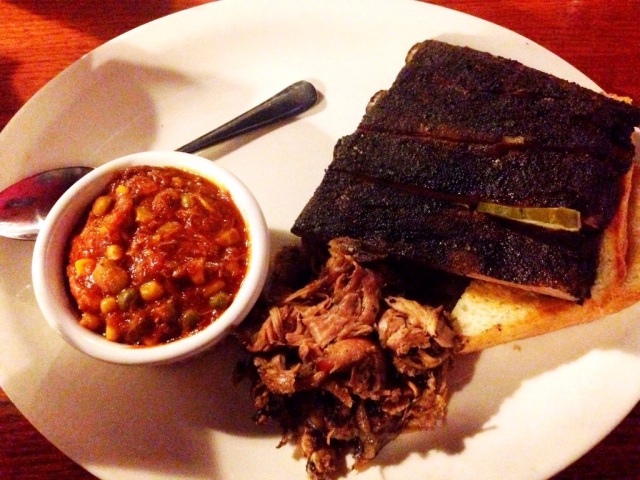 They use their own Lucky 13 rub on the barbecue before it goes into the smoker, which gives it something of a unique flavor.  The pork itself was very tasty, moist with a good bit of smoke.  I tried it with each of the sauces determining that I liked the thin and hot North Carolina style, vinegar-based sauce, with pepper flakes and their sweet, thick tomato-based Memphis style the best.  Unfortunately, this wasn’t one of those situations where you can make two good things better when you put them together.  (I guess the hot sauce had a little bit of sweet in it that made the combination with the sweet sauce overly sweet.)  The other two sauces were a tangy and sweet South Carolina style mustard-based sauce and a thin, peppery tomato-based sauce that they listed as KC style.

The Brunswick stew was very meaty and very thick.  Not being the world’s largest Brunswick stew fan it really takes exceptional stew to get me excited.  This wasn’t that.  The ribs were good, however, but they weren’t very meaty.  Between the four ribs and an end, I probably got less than eight fork full’s, total, of meat.

The french fries were very good, appearing to have come straight to the table from the fryer.  The only downside was that the ketchup was a the house blend and it just wasn’t quite sweet enough for my taste.  It reminded me of the Muir Glen  organic catchup that you get at many of the local sourced restaurants around town.

Overall, the meal was fine, but I remembered why I didn’t rush bac – every element of the meal is better represented somewhere else in town.