March 7, 2014 · by willoughbyandy · in Everything Else, Georgia, Roswell / Sandy Springs · 1 Comment

For those who read the blog regularly, you’ll know that I tried to eat at Rumi’s Kitchen about three weeks ago, but had the address wrong and ended up eating a bad (and according to a couple of comments, a bad-looking) pizza instead.  When I was talking with some of our friends about dinner on Friday night, they asked me to give them three choices that I wanted to try – I did and Persian was the verdict.  We made an early reservation and arrived at a restaurant that was already fairly busy.  By the time that we left, it was overflowing with people, both inside and out. 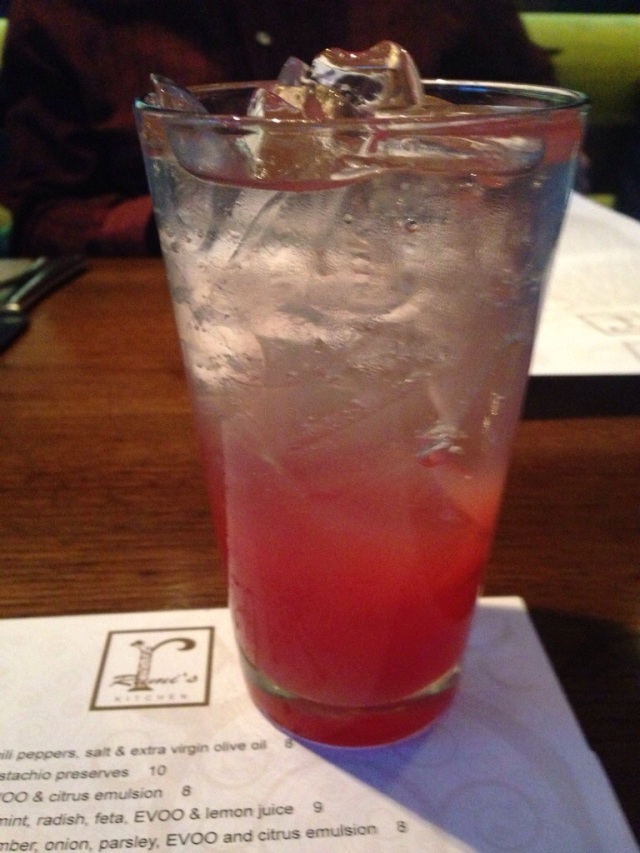 I started with one of their house-made sodas, a berry and peach mixture (above) that was very interesting.  As none of us had eaten here before, we asked the waiter for recommendations and he suggested that we start with an appetizer platter which included seven of their starters.  A few minutes later, we had a table absolutely over-flowing with food, in at least ten plates or bowls, along with appetizer plates for each of us, and two baskets of naan (baked in the the two giant tandoori ovens near the entrance). 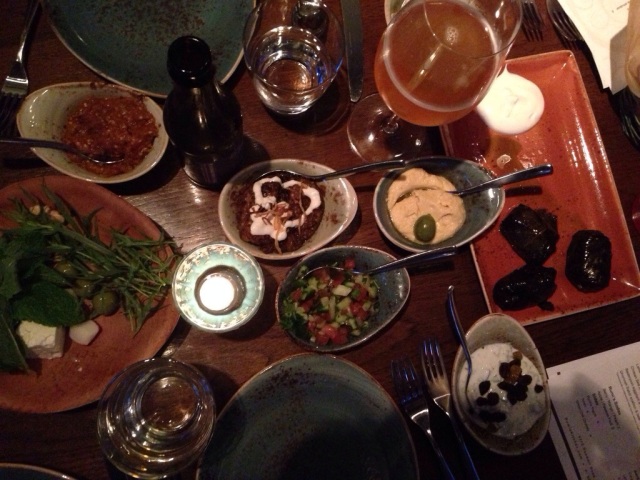 In this picture, you can see: dolmeh (minced beef, rice and mild herbs, wrapped in grape leaves) which were tasty and were served with an amazing sweet & sour pomegranate sauce; hummus; shirazi salad (tomato, Persian cucumber, onion, parsley, EVOO and citrus emulsion); Kashk Badenjoon (fried eggplant , cream of whey, crispy onion and mint), which was adored by our dining companions; Mirza Ghasemi (smoked eggplant, tomato and garlic); a yogurt trio (Persian cucumber, sun dried shallot and spinach); and a plate with olives,  herbs and a block of feta cheese.  The naan bread was warm and crispy and delicious and was dipped in everything that we had on the table. 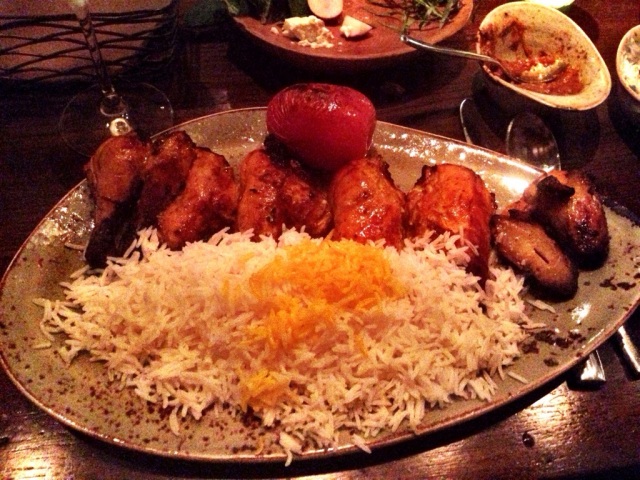 As you can see, it was a heaping plate of food (that also had a non-disclosed whole roasted tomato on it – they had stacks of skewers of tomatoes by the grill) and the hen was moist and tasty.  The plate was oddly shaped, which resulted in her fork falling off the plate, and almost off the table, any time she tried to rest it on the plate.  After the massive amount of appetizers and the time spent waiting for the entrees, none of us were able to finish our meals.  I ordered the saffron-yogurt marinated rack of lamb with lentil bismati rice (which was also chock-full of raisins). 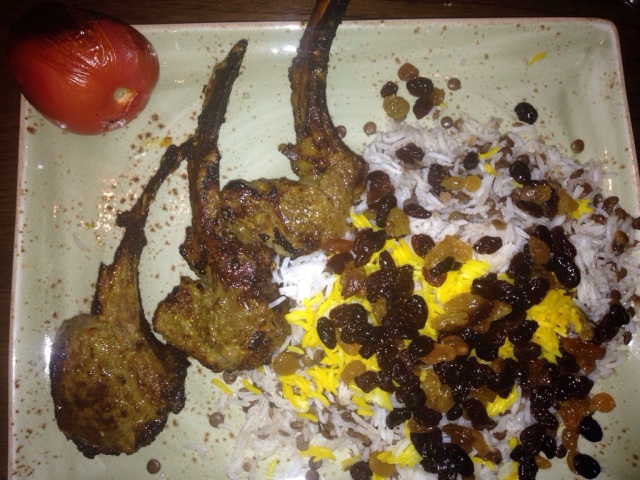 As I said above, there was a quite a gap between when we finished the appetizers and when the entrees arrived.  I think the lamb contributed to our delayed entrees – there seemed to be quite a conversation about what was coming out of the kitchen in what order, right behind our table.  And our waiter kept doing that thing where you point at people with your eyes and a head toss.  Lamb is one of those hit-or-miss dishes for me that misses more often than it hits.  I should have ordered chicken or beef.

We had more food than four people could eat, but the table next to us seemed to have the right idea.  They ordered three entrees for the four of them and were served one plate with three kebobs on it, a tray of sides and a giant plate of rice.  While it sounds like a lot (it was), it looked manageable.

As we were leaving, we ran into the only issue with Rumi’s – the parking situation was miserable.  It was valet only (they have many less parking spots in the oddly shaped lot behind them than they should to accommodate the possible number of cars when the restaurant is approaching full).  We got our car pretty quickly (because it was parked next door), but the line of cars waiting to give the valets their cars and pick up their ticket was running head-on into the line of cars being brought up to their owners. 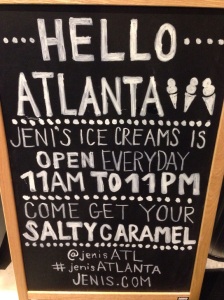 We did bypass dessert and, instead, went to Jeni’s Splendid Ice Creams, as the couple we were with hadn’t been there.  In the interest of full disclosure, we had tried to go there the night before and couldn’t find a place to park.  We did find a spot tonight and joined the long line of folks waiting for their ice cream, even though it was chilly.  I had Reisling poached pear sorbet and goat cheese with red cherries – I am constantly amazed at the wide variety of interesting flavors.   Although the ice cream is too rich for regular visits, I love dropping by occasionally.  Apparently, so did the couple in line in front of us.  They had their three boys with them, but said that most nights they put their kids to bed, assure they’re asleep, and then one of them sneaks and gets ice cream and brings it back just for the two of them.  Sounds like a great plan.