April 16, 2014 · by willoughbyandy · in District of Columbia, Everything Else · Leave a comment 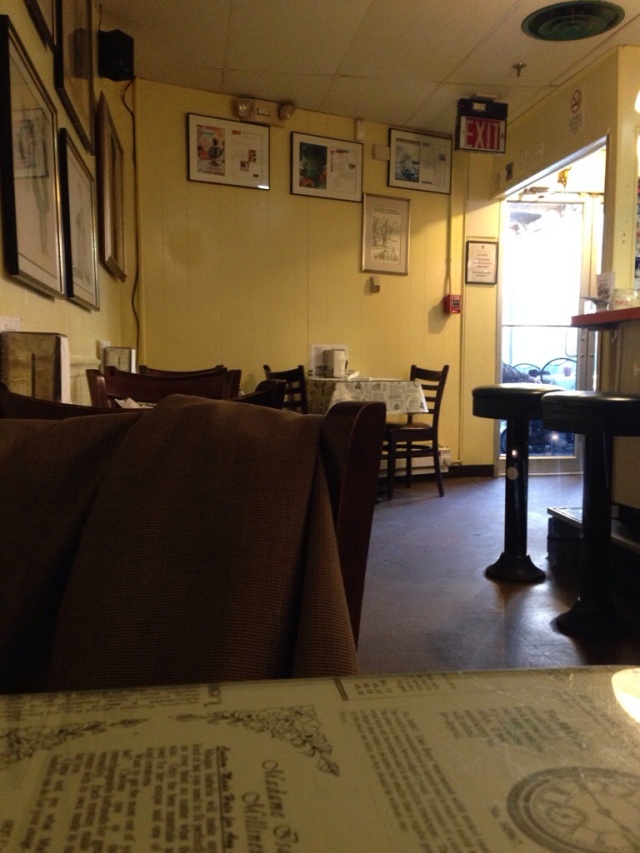 Arriving in DC mid-morning for an early afternoon meeting, the top thing on my agenda was lunch. I checked one of my lists (100 Places to Eat Now – Southern Living, August, 2013) and found six places in the District. Three of those appear to be open for lunch and one is close to my meeting. I take a cab to DuPont Circle and start walking. Just once, in this city, I’d like to walk in a direction that didn’t result in my going half a block, hitting a cross street and finding the numbers (or letters) going up (instead of down) and having to make a u-turn. This was not that occasions. Ultimately, I head in the right direction and find C.F. Folks, right next door to the Palm. I walk though the plastic walled patio (it’s 50 degrees and windy) and into the restaurant proper (eleven stools and eight tables, to go with the 20+ seats outside) and am told by the counter guy to sit wherever I like.

I take a seat at one of the two top tables (the view above looks toward the door) and see the two menus – the standard sandwich menu, stuffed behind the napkin dispenser, and the daily specials, laid out on the table before me. I’m here for one of the the specials, which are also on a board behind the counter. That counter – the more that I look at it the more interesting it gets. There are two bookshelves full of cook books, bowed under the weight of their contents and I notice a small printed piece of paper by the register that gauges the weight staff’s mood from a series of choices which include:

There is also, you can just see it in the left corner of the picture, a statue of a penguin wearing a Nobel prize. I don’t think it is real.

After I order, a couple of guys come in and sit at the counter. Both appear to be regulars.  The first is “Richard” and when he can’t decide what he’ll have, the counter guy and the cook debate between the brisket and the fish.  When his food arrives, counter guy actually pulls out “his” fork from one of the cookbooks on the shelf.  The other, older man is greeted with, “Fish and coffee?”  It seems to be a true neighborhood place, open for almost 33 years.

I ask my server which of the specials he’d recommend.  He tells me that he had the brisket yesterday.  That was good enough for me.

A few minutes later, my meal arrives – slow-roasted, chopped brisket in a rich sauce over (and under) a puff pastry, served with a salad.  This reminds me, conceptually, of the chipped beef and gravy that my mom made with Dinty Moore canned roast beef and biscuits when I was growing up (I’ve later learned in military families this is know as “€%#€ on a Shingle”), except that the ingredient quality and taste are taken up several notches.  This was spectacular – the sauce was slightly sweet and thick and the puff pastry flaky, like the best croissant you’ve ever tasted.  I clear the plate.  To the point of scraping the side of the bowl for every bite with my fork.  I watch the fish come out and be served to the two guys at the counter and the crab cake sandwich go buy.  They look good, too. The serving wasn’t large, but fairly priced (at $11.95) for food in DC (where all of the attractions are free, but food and lodging are really expensive) and I’m thinking about dessert.  Or maybe a bowl of the soup.  Then the counter guy walks over and asks if I’d like anything else.  We discuss the other entrees, and two minute later I hear him yelling into the kitchen, “the guy with the brisket really liked it.  Now he wants the pork.”

Herb roasted pork tenderloin, served with sauteed vegetables, roasted tomato and fresh mozzarella pasta salad and focaccia bread arrives ten minutes later.  It is good.  Not as good as the brisket (not much lately has been), but good.  The pork tenderloin has a bit of brown gravy with a spicy bite to it, and is sliced into seven 1/4″ thick medallions.  The pasta salad was the surprise hit of this plate – think a caprese salad (with the tomatoes roasted instead of fresh) and spiral pasta in a basil olive oil, served cold, and that’s pretty close.  What a great lunch find.

I find from their website that they received a 2013 James Beard Classics Award (along with my favorite find of 2013 Prince’s Hot Chicken – in that company, this place was destined to be good).  As I’m leaving, I ask about the history. Counter guy tells me that the owner, who is on vacation this week, and is mostly retired, started CF Folks with a partner in 1981 and now has three businesses in the neighborhood (the Well Dressed Burrito and CNF Catering).  He also tells me that what he thinks contributes the most to the food – the energy and attitude of the four people working there.  “Think about it, ” he says, “where else can a chef get evenings and weekends off?”  They all come in and work a few hours in the middle of the day, weekdays only and get paid holidays.  Happy people make happy food.  And they made my belly pretty happy, too.