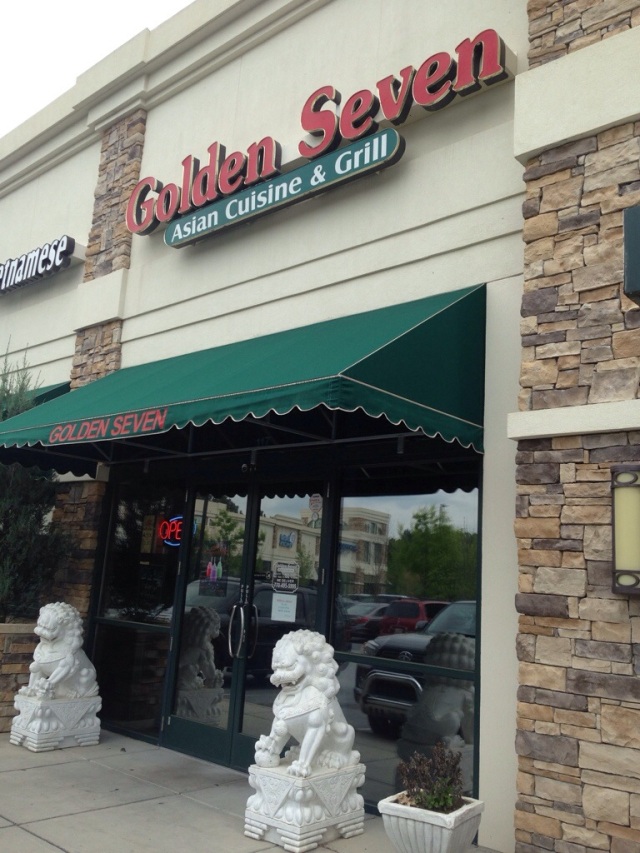 When you walk into an Asian restaurant and the Asian patronage percentage is less than 8%, that’s never the best sign about the authenticity of the food.  And when the signage on the street advertises it as a Chinese, Vietnamese and Korean Asian Grill, you wonder if it’s a jack-of-all-trades-master-of-none kind of place.  But, what the heck, I’m “lone wolf” and it’s just down the road from the office.  Hopefully it will be quick.  And maybe it will be good.

Lunch is primarily Chinese and Thai food, with Vietnamese dishes appearing on the dinner menu.  I started with the Tom Kha chicken soup.  This coconut soup was as sweet as I’ve ever had, and actually too sweet to enjoy.  But it had quite an after bite from the chili oil.

I ordered Pad Kee Mao noodles and asked for the drunken noodles to be prepared medium-hot.  They delivered.

One of my coworkers loves Thai food, but I’d never found anything that I liked until I tried the noodle dishes.  Drunken noodles have turned out to be my favorite Thai dish.  I was afraid that I’d “discovered” an Americanized version of a Thai dish (like the Americanized Chinese food that is so prevalent).  But in researching, it appears that drunken (or drunkard’s) noodles is actually a Chinese-influenced dish developed by Chinese people living in Laos and Thailand.  Filled with pepper flakes, peppers and onions and chicken rich, this dish was very tasty and very spicy.  I enjoyed it thoroughly. 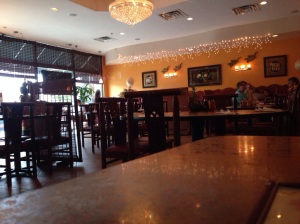 The food was good, but there was a downside – it was dark.  So dark at noon on an overcast day, that I couldn’t read the book I brought in.  This is one of my pet peeves in a restaurant catering to working people.  Most folks aren’t looking for “ambience” at noon on a Tuesday.  And, if they are, I sure hope they aren’t looking for it in a strip mall restaurant.