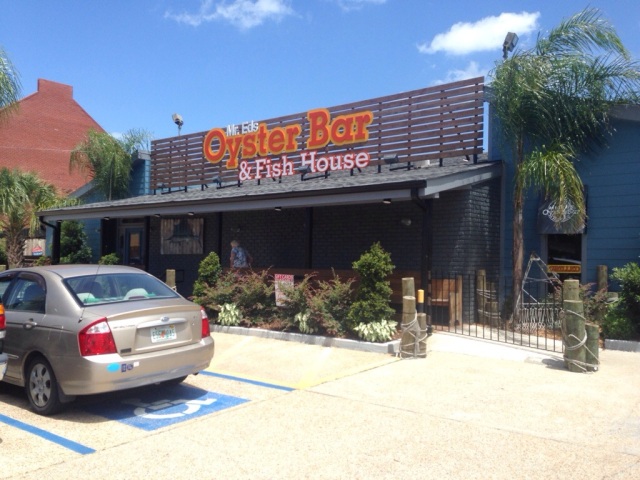 Arriving in Metairie for a meeting, I was surprised when they asked me what I wanted to do for lunch.  Because, as always, when there was food involved, I did have a plan. Before I left, I looked on my list, for places near where we were going to be, and found Bozo’s in the list I had from Hamburger America.  It was in Metairie, and I had actually seen 21st street as I headed to their office and figured it was less than six blocks from where we were sitting.

When I mentioned the name, the two folks I was meeting with looked befuddled.  Then when I gave them the address, one of them Googled and said “Oh”.  That’s never a good sign.  Apparently, Bozo’s was no more and a place called Mr. Ed’s Oyster Bar now occupied the space.

The recommendation from the Hamburger America app had said that it was an unusual spot for a burger – housed in a seafood restaurant.  Then, one of the “near-natives” told the tale….

Bozo’s used to be the in the French Quarter, but had moved to Metairie in 1979.  There, Chris Vodanovich, Jr. (son of the original “Bozo”) kept cooking seafood and this cheeseburger po-boy for more than thirty years.  Reading the articles on the wall in the lobby as we entered, I found that the new owner had been a regular and told Bozo that he would own Bozo’s one day.  Now he does.  And he’s kept some of the original menu items, including Mr. Chris’ Original Cheeseburger.

I knew what I was ordering before we left the office, and based on what I had told them, two of the four others at the table had a burger also.  Served on the foundation of all true po boys, Leidenheimer French Bread (used all over New Orleans for more than a hundred years), this burger is two patties of ground beef (and chopped onions, I learned later), served under caramelized onions and American cheese with lettuce, tomato, pickles and mayonnaise.

I had the pickles, lettuce and onions held, so I was surprised when I kept tasting onion with every bite.  I inspected the burger, making sure there weren’t onions I hadn’t seen underneath the burger or between meat and cheese.  I stared closely at the mayo, looking for onion.  Then I asked the guys I was eating with if there were onions ground up with the beef and they said, “Absolutely – it’s what makes a New Orleans burger.”  Now I know.  I guess that I should have read the entire entry in the Hamburger America book before I left home….  It was perfectly fine, but nothing I’ll rush back for.

But I can knock one more place off the original list – and add to the original quest for the perfect burger that inspired this blog.  And I did get red beans and rice, as opposed to fries, for the side.  You can’t do THAT everywhere.