One day you look around and you realize that you’ve never said a word about someplace that you may eaten at all of your life. So, here goes. First, it’s Zesto – not Zesto’s, as most people (including me) say.  They’ve been open, in Atlanta, since 1949, with four locations here (and one in Tyrone) currently in operation. I was heading to a friend’s home in Inman Park, so a stop at the Moreland location certainly seemed in order.

As I have for the last ten plus years, I step up to the counter and order a pork chop sandwich (which they stopped serving in the downtown stores some time in the early 2000s, but I try, anyhow).   For what it’s worth, you can still get a pork chop sandwich at the Forest Park location. You should go to there, just for that. I decided on the Chubby Decker. Then, as I sat on a stool at the window counter facing Moreland and waited, I wondered where the name came from. And the oracle spoke:

By this time all Zestos were serving food and had expanded the menu to include hot dogs, fried chicken and french fries. Also added in 1959 was a double deck hamburger called “Fat Boy”, as well as a “Foot Long” hot dog. Unfortunately, in 1961, Big Boy Restaurants (Shoney’s) had learned of and did not appreciate the likeness that Fat Boy had to their own Big Boy hamburger, and threatened to sue Zesto. Knowing he would probably lose the suit (and not having the resources to fight it), John held a contest to rename the Fat Boy. A student from Georgia Tech came up with the name “Chubby Decker” which was named with a then popular rock and roll singer, Chubby Checker, in mind. The name stuck and it is still the most popular food item at Zesto. 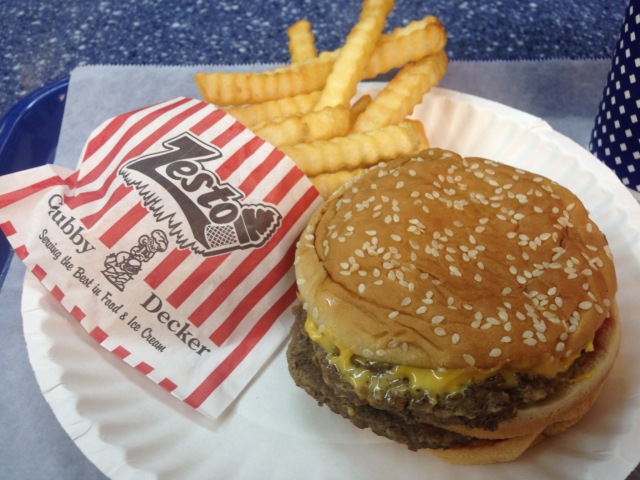 There’s nothing quite like a Chubby Decker combo. Sure the fries are industrial grade crinkle cuts. And the restaurants all look like you’ve stepped through a time warp. Not the good kind of time warp that takes you to Arnold’s of the 1950s. Rather, it’s the kind that takes you to a Burger King or Dairy Queen of 1973. Which is not an absolutely terrible thing, as I remember the real flame broiled burgers of my childhood as being tasty. The Chubby Decker reminds me of how I remember a Whopper tasting when I rode my bike to the BK. Except I eat mustard on my burgers now.

And that’s what Zesto is to me – a touchstone to my past, covered in ketchup and mustard.