Sometime after Christmas, I was told that I was in charge of New Year’s Eve plans for our party of six.  I immediately went to Google looking for options, then searched open table for available reservations.  One of the options that came up was for Union Hill kitchen in Chamblee.  We had seen executive chef Alexis Hernandez win Cutthroat Kitchen last season and had seen that he was from Atlanta.  That inspired a search and we found that he is the owner and executive chef at Union Hill.  This presented the perfect opportunity.  We looked at the menu and saw the choices were interesting, so I made the reservation.

We all met at one of the couples house and headed off in the Caravan they had borrowed from their son.  “The six pack rides again!”  (For twelve years, Jo’s daily driver was a Grand Caravan that comfortably seated all of us, hence “the six-pack” moniker.  When she got a CRV several years ago, it changed the transportation dynamics and, whenever the six of us dined out together, there was now a need for multiple cars.)  We got to Chamblee just in time for a seven o’clock reservation and were greeted at the host stand with party hats while they finished prepping our table.

After grilling our server, Tosha, about the menu we learned that their top selling item is the Hudson County Fried Chicken and that their burger was voted “Best Burger” by GA Voice.  I was tempted by the burger, but did not succumb, although two of our table mates did.  We started with the chorizo stuffed dates, topped with goat cheese and wrapped in bacon. These arrived, atop a bed of slaw. 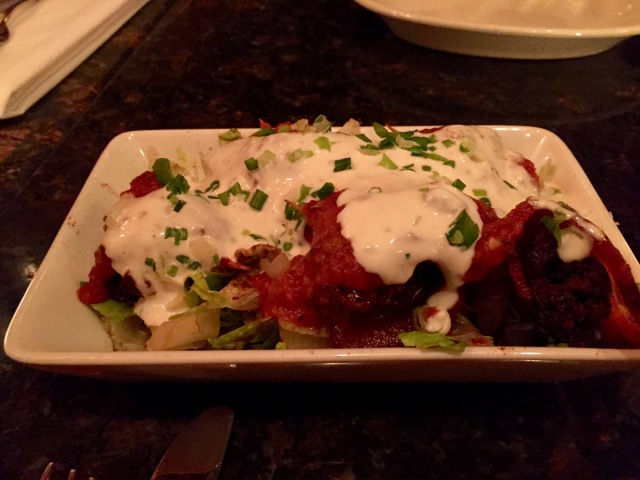 Pardon the darkness of the photos – I chose not to use a flash, which, in retrospect, was not the best idea.

They were fine, but nothing spectacular.

Jo had asked, before we ordered, if we could meet the chef.  Right after the food arrived, he came out of the kitchen and visited wi

th us for a bit.  We talked about seeing him on Cutthroat Kitchen and he said that it had been a really long day.  He actually chatted for quite a while, until they came and drug him back into the kitchen.  The host, who was the co-owner, said that they often had to make him stop talking to customers so that they could eat.

Jo ordered the salmon and potato potage, which, from the menu, was hard to discern exactly what she was getting.  The explanation was that a potage was “like a thick soup”, made from vegetables.  We asked, specifically, if the salmon was swimming in the soup and were told “no”. 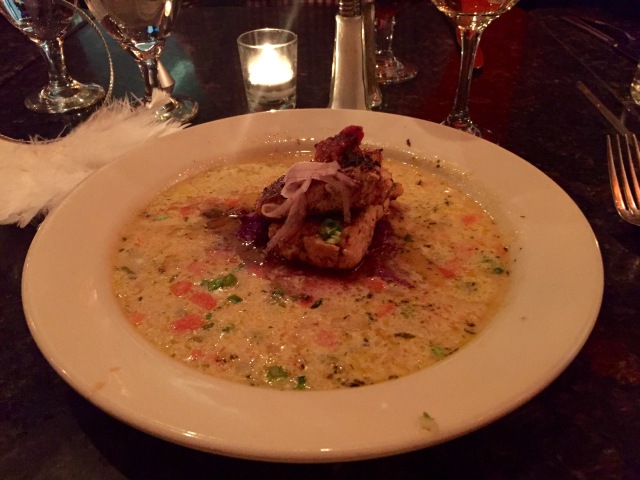 When they arrived (there were three at the table), that answer should, clearly, have been “yes”.  So they asked for spoons and all three cleaned their plates – the dish was, apparently, very good.  I ordered one of the specials, a lamb shank served on potato gnocci, with a “puddle of coconut and herbs”.

All of the gnocci seemed to have soaked in the puddle – the taste was pure coconut.  The lamb was tasty, but there was way more coconut in the gnocci than described.  The entire time that we were eating, the burger to my right was drawing my eye.  Ultimately, I gave in and flagged the server down.  This (brief) conversation ensued:

Me: “Can I get a burger, medium, bacon, cheddar and a fried egg, hold the fries?”

Server: “Is there something wrong with your meal?”

I cut it in half – quite a challenge, based on the thickness and the eggs trying to slide off the patty – for sharing.  This was a hard-to-handle burger, and I recalled this advice and hooked my thumbs underneath, trying to keep it together.  About halfway through the burger, which I was sharing with Jo (and offering to others) the chef came out of the kitchen.  He said that our server was pressuring him to get this burger ready for Amanda Lotta Lamm (what he understood and I heard).  It was actually for  “the man that had the lamb”.  The burger was tasty.  After we finished, they brought a plate of macaroons to the table.

These were very good, and provided to the restaurant by a friend-chef in Chicago.  A nice way to end the meal.

Overall, the food was very good.  In fact, our only complaint was with the server’s inaccurate descriptions of the entrees.  I’d like to go back and try the fried chicken.

Or maybe I’d ask Jo to order the burger and we’d share it and the chicken.