Over the last several months, I’ve been following the prospective opening of Le Fat in the local food press.  Earlier this week, I had seen them appear in the Easter 38 and realized that they were  open (they had opened around the first of April).  This afternoon, as we were wandering through our Saturday, I realized we were going to be heading south on 75, from Woodstock, and would have a chance to give this place a try.  We made a reservation for 5:00, right as they opened, and arrived a few minutes ahead of time.

In fact, we walked in, before they were technically “open”, and as they were finishing the staff meeting for the night’s dinner service.  The host offered us a seat at the bar, while we waited for them to be ready.  The interior is decorated like you are walking into a brasserie in Indochine (Vietnam under the French influece, as it was in the 30s to 50s) and is very “light”.  While we were sitting at the bar, the bartender heard the music start and noted, comically, that it was “time to start talking to us.”  He was polite and comfortable with conversation, without being intrusive.  His service attitude was a harbinger of the rest of the evening. 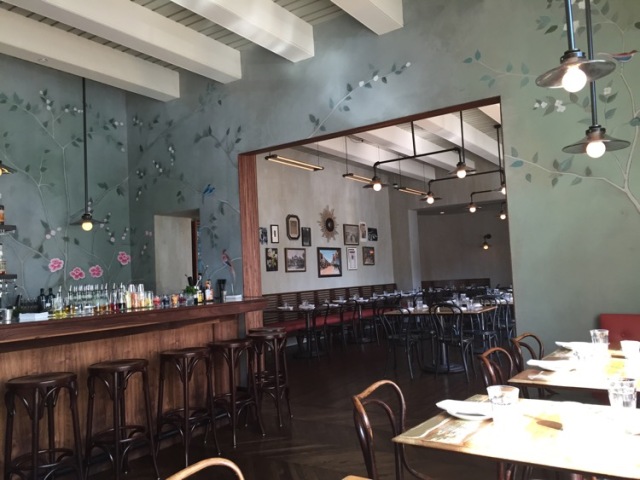 The menu is divided into four sections, appetizers (there was an interesting mix of these, but we went straight to the food), salad and soup (ditto), classics (pho, bun and vermicelli) and specialty (these are designed as shareables – entree sized dishes to be placed in the center of the table and shared).  The waiter, who was exceptional, walked us through the specials and changes.  And then, when he came back, explained what was notable about every dish.

He also explained that the kitchen would be sending out food as it was finished, which worked well for our plan to share a couple of dishes.  We debated the spicy chili prawns as a choice (which are served head-on and, according to our waiter, are often eaten that way), but decided instead on: 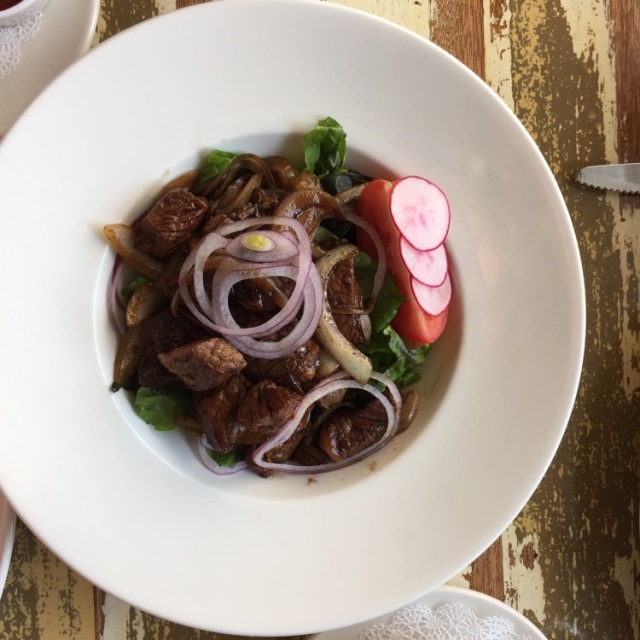 Bo luc lac (shaking beef), which was prepared with lettuces and a mix of vegetables) and was served with a bowl of jasmine rice and three sauces (sriracha, pickled jalapeños and a house-made chili oil).  It was also served with a blend of salt and pepper in  small dish, into which we were instructed to squeeze the slice of lime and dip the beef.  This dish, with a little of the chili oil (actually, a LOT of the chili oil – we had to ask for more) was fantastic.  We also shared 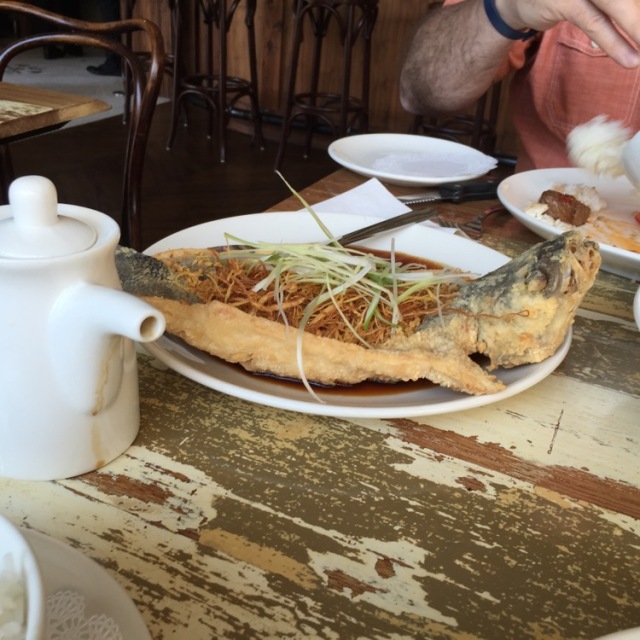 The whole fried branzino.    The fish was filleted and served whole, fried in rice flour – very light and crispy (think rice Krispy puffs), served with a miso soy sauce and jasmine rice.  The fish was listed as MP (market price) and we didn’t ask what that price was.   While we were waiting for our food, we debated what the market price would be – we guessed $36 and $42.    While we were enjoying the fish, the waiter came by and we asked him the price.  $19.   I was shocked at the price – he said that he believed that the chef wanted everything on the menu under $20.  The fish was light and flaky and the sauce was delicious.

The meal was extremely tasty and the service was quick and gracious.  We were offered the dessert menu and learned in the process that they have a pastry counter, immediately to the left of the entrance.  We were too full to have anything there, but after looking at the pastries decided to take two cupcakes and cinnamon bun home..

As we were waiting for our pastries, chef-owner Guy Wong stopped by the table to ask us how we enjoyed our meal.  He told us of the inspiration and about his other projects in the works.  We told him that the food was excellent and that we had told the waiter how impressed we were with the value.   He said that his goal was to make Le Fat a place that you could return to twice a week, instead of once a quarter.

This is a great addition to the west side.  And a place to which I would not hesitate to return.