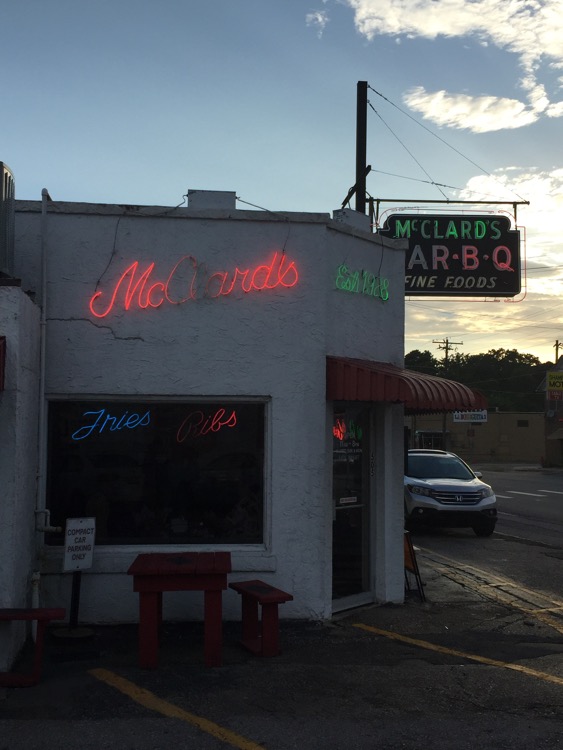 This was the night that I was sure my insistence on relying on the GPS on my phone (as opposed to renting one) was going to come back and bite me in the butt.  Leaving Dallas, with a hotel reservation in Little Rock, had left us with quite a drive ahead of us.   I had dinner in mind at McClard’s Bar-B-Q in Hot Springs and plugged the address into the GPS.  We left the interstate west of Little Rock, and began the drive towards Hot Springs.  I was already hungry, bordering of hangry.  After 30 minutes or so, we came into the edge of town and took a left.  Into a neighborhood.  We then drove about three blocks and turned right.  Then four more blocks and turned left.  Went through a stop sign and the road went down to a single lane.  I had the feeling of a pending, but likely unsaid, “I told you so” (that would have been well deserved).  Ready to back-track, we took one more turn and pulled up to a four lane, next to this wall.  Tragedy averted. 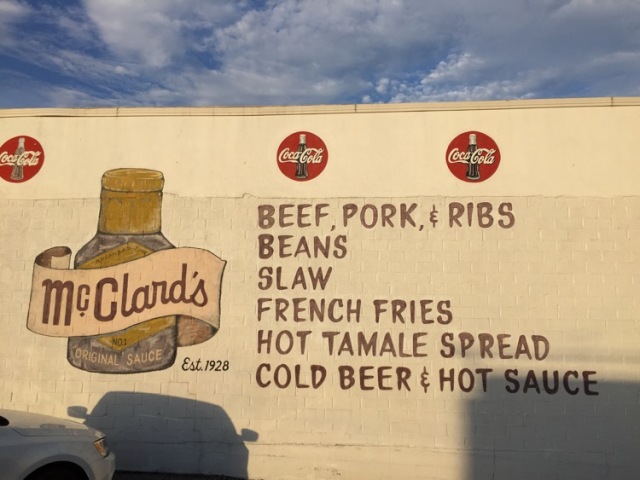 We arrived after seven (and they close at 8:00), so dinner service was winding down.  We found a table along the front wall and took a look at the menu.  On Wednesday, they have a couple of specials – chicken and a special price on the Whole Spread (two tamales, with fritos, beans, chopped beef, cheese & onions).  The Whole Spread is on the menu every night, but there is a special price on Monday – Wednesday.  Chicken is right up my beloved’s alley and when she asked for it, found out that they had just run out. 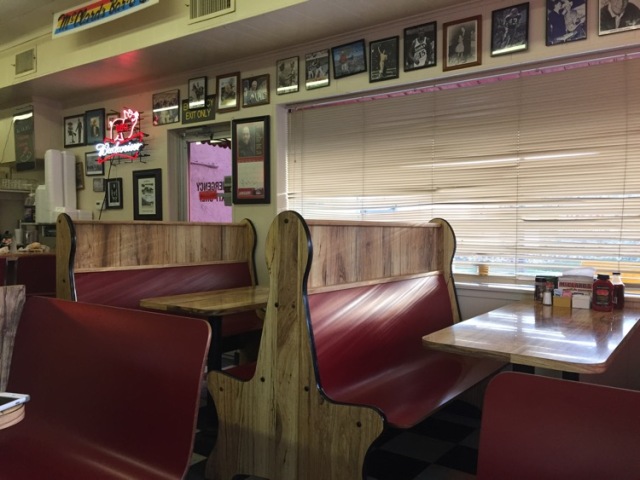 This led to one of my favorite food stories from this trip.  After we ordered, the waitress came back to the table and said, with all sincerity:

“You know, there is one piece of chicken left – I tore a leg off of it, but I didn’t touch the rest.   You can have it if you want, and I’ll knock a dollar off….”

I do not lie.   We passed on taking her chicken.  Jo ordered French fries, covered with chopped pork, cheddar cheese and barbecue sauce, with sliced jalapenos and ranch dressing on the side. 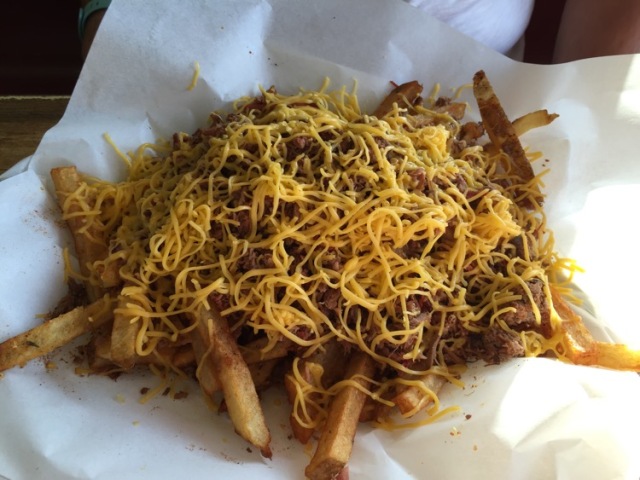 In retrospect, other than the fine dining that we had near the end of trip, she said that this was the best meal that she had on the trip.  I sampled the hickory fries and they were tasty.  I was tempted by the Whole Spread, but chose instead to get the sliced pork, with a side of fries and a side of tamales. 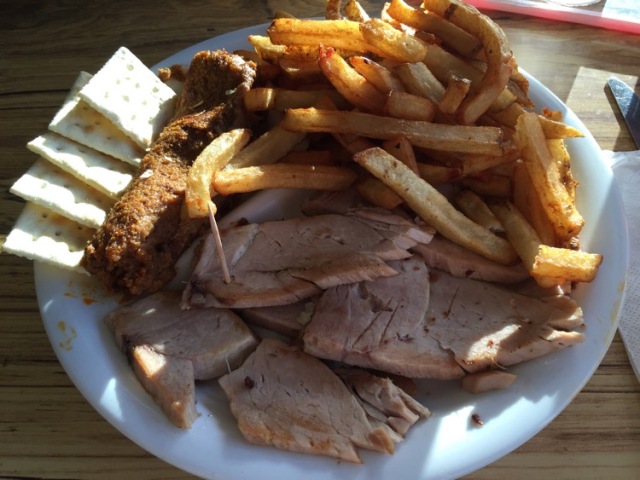 The pork was not the best choice – it was okay, at best.  I should have ordered the chopped beef, based on my notes.  But this tamale was something.  The whole tamales-with-barbecue thing is an oddity, here at home, but seemed to be the norm in much of Arkansas and Mississippi.   It was spicy and unlike any that I have had before.  It was not a typical tamale you’d get in a Mexican restaurant, but something entirely different.  As I understand it, they fill the tamales with the same meat that goes into Brunswick stew in Georgia and into hash in South Carolina.  Definitely a different side with ‘cue and in an iconic location (this place was a regular stop for President Clinton, prior to becoming #42), to boot.

Leave a Reply to McClard’s Bar-B-Q – Hot Springs, AR | Burgers, Barbecue and Everything Else Cancel reply