We first visited Oxford, Mississippi several years ago on the way back home from a funeral in Memphis.  Oxford was (kind of) on the way and we were looking for a different route home than we had taken there (the non-existent I-22).  We had thought the town looked quaint and it fit our desired days’ drive, being between Little Rock and Birmingham.  Up to this point on the trip, our dining had been on the “fast casual” end of the spectrum, occasionally branching toward the “dive” end, but we had actually brought “dinner clothes” for this meal.  I made a reservation last month and we were set.

Snackbar is located in one end of strip mall less than a mile from downtown Oxford.  In fact, I recognized the shopping center as we had been to an antique store there on our last visit (we marked that down for tomorrow morning).  We came to Snackbar from the article 50 Best Southern Foods (Garden & Gun. Oct/Nov 2011) – note that this is the source whose guidance I failed to heed in our last stop, but I didn’t plan on trying the recommended pig ear stir fry here …

They also were listed as one of the 13 best restaurants in the South on Thrillest last year – and based on our opinions of the five that we had been to, I was really looking forward to seeing what they had to offer.  But here’s the odd thing – we didn’t actually see our dinners until we got back to the hotel and looked at the photos…. It was so dark in there, at 6:00, that we had to use the flashlights on our phones to see the menu.  The entire restaurant wasn’t quite that dark, but our table (immediately to the right after entering) direly needed a light above it, as many of the others along the walls had.   We both had fish – my black  drum sauce creole, served with a tasso rice grit cake and a summer squash salad (above) and Jo’s fish special (it may have been flounder) with mango, citrus and radish (below).

Both of the fish dishes were deftly prepared – flavorful and flaky.   I tried both and enjoyed mine more, but that was likely the creole sauce talking.  We had not planned on dessert, until the server mentioned the toasted pound cake, with blackberry jam and sweet corn (yep, you read that correctly) ice cream. 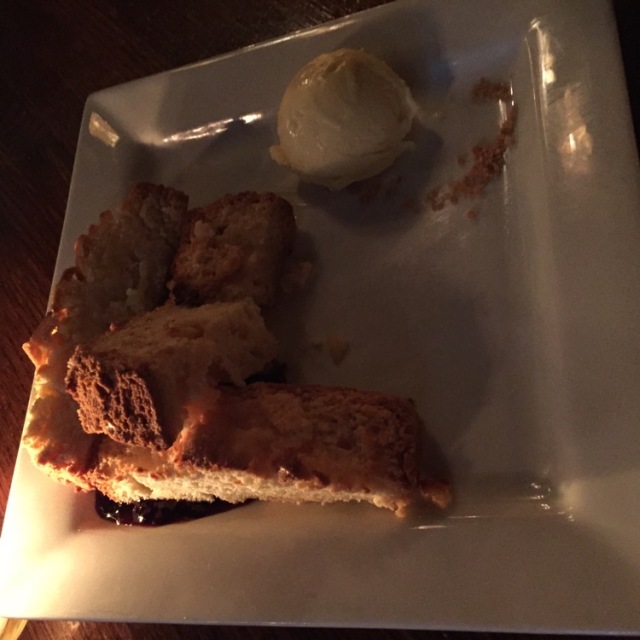