Red Bridge Barbecue Lodge, in Shelby, is one of the icons of North Carolina barbecue.  In fact, they had recently won a barbecue bracket contest (think of a NCAA tournament  bracket) sponsored by Garden & Gun magazine, as the national barbecue champion.  You can check out the bracket here.  You’ll notice several places we’ve visited among the 64 – see the bottom of this blog post to find the links to those. 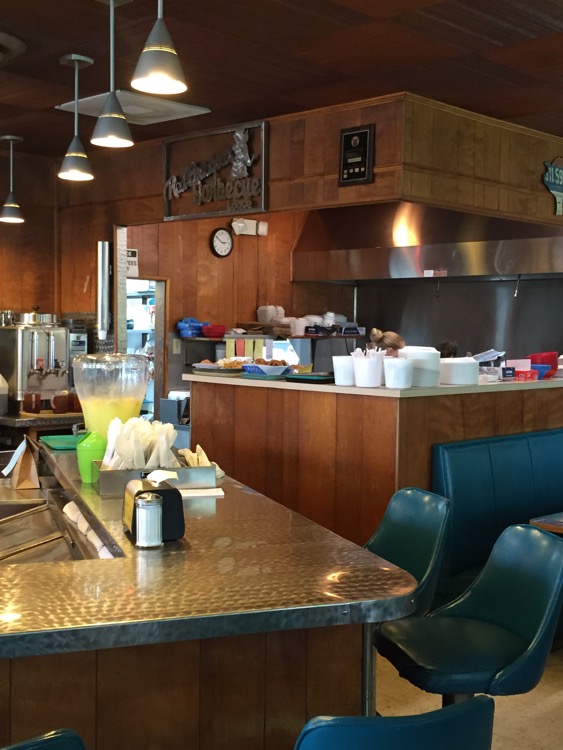 We were seated at a table across from the bar and greeted by our server, who told us (later) that she had been there for 31 years.  She also told us (right after sitting) that they were out of both chicken and turkey.  That made our choices simpler.  Jo ordered a pork plate with slaw.

When she asked what kind of slaw they make, we were told that they serve red slaw at Red Bridges, something I’ve never seen before.  We were then told that it was red wine vinegar and tomato based.  The official BB&EE slaw taster said that it was weird tasting, by itself, but made for an oddly satisfying combination with the barbecue.  In the middle of the table (out of the picture, in the red basket) were the asymmetrical hush puppy fingers, which were fried perfectly.   I ordered a pork sandwich and a grilled pimento cheese sandwich.

The grilled pimento cheese sandwich was the highlight of this stop for me.  The bread was grilled first, then the spread was added, keeping it from becoming a runny mess, but still allowing for a high score on the gooey  scale.  I was commenting to the lady at the register about how excellent the pimento cheese sandwich was.  Then she told me that she had asked her momma (she is Red and Lyttle’s daughter) to come back and teach them the recipe – they had taken pimento cheese off the menu some years back, she wanted it added back when she took over and no one knew the recipe.

I checked out the smokehouse as we left and was amazed at the size.  And there was a stack of hickory wood – easily as long as a tractor-trailer – stretched out to the left of this building.  If you’re in the area swing by and try the red slaw. And don’t forget to get a pimento cheese sandwich.