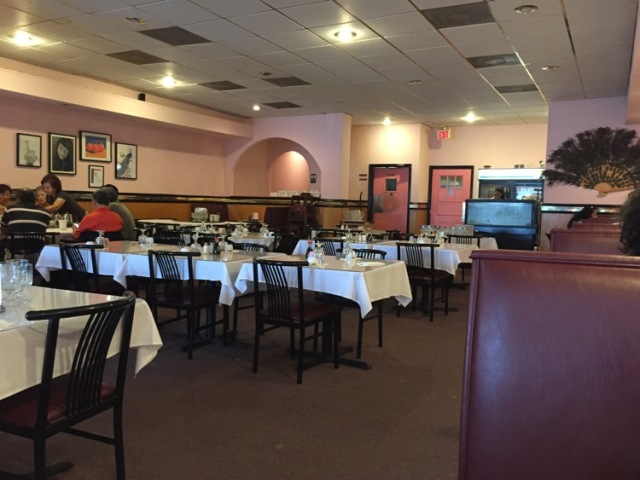 On a rainy Sunday, we went looking for a Chinese restaurant from my list, China Cooks (this one had been on the list for five or more years).  As I was looking for the address on Google, I ran across several Yelp reviews, almost all of whom said that they only ate at China Cooks, when they could not get into Canton Cooks.  That sounded like we needed to head to Canton Cooks instead, so we did.  We arrived a little before they opened, at noon, and found a couple of places to wander through in the strip mall that they share with Whole Foods.

We started off with some hot and sour soup on this cold misty afternoon.  Hot soup and misty weather go together as well as sunshine and hot dogs.  As I’ve said before, hot and sour soup is the litmus test for me for any Chinese restaurant, and this was definitely on the hot side, and with a tangy after taste.  That’s a great sign.

My beloved had the salt and pepper lobster, which was so fresh that I watched them pull the lobster from the tank about fifteen minutes before her meal arrived.  All of the reviews said that one of the dishes to have here was the salt and pepper squid, so I was encouraging her to head in that direction.  But when I saw the salt and pepper lobster on the menu, I knew that would be a better choice.  This was an interesting dish in that the lobster was actually fried in the shell.  They didn’t originally provide a nut-cracker to crack the shell with, but once they did, the just meat fell out of the shell and was very moist and tender.

I went with another recommended dish,

war shu duck ,a Cantonese classic.  I’m always fifty/fifty on duck, occasionally finding it exceptional or just as likely to not like it at all.  This was pretty close to the positive end of that spectrum, light and not greasy, with well-seasoned vegetables.

While this may not be the best Cantonese food I’ve had, it certainly was an unexpected find just outside the Perimeter on Roswell Road.