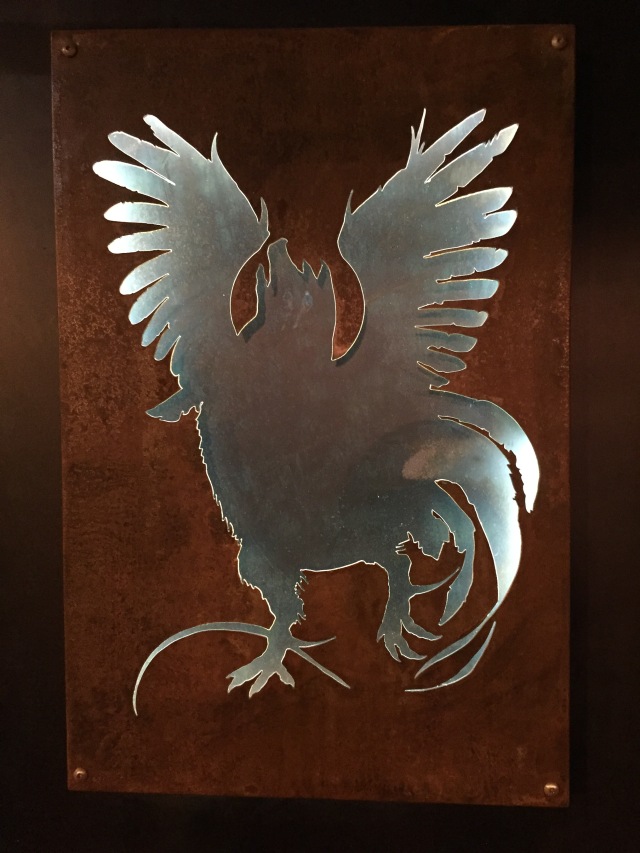 After our attempted earlier (but still really late, for us) dinner, here we were at 9:45, looking for supper.  I drove from Piedmont Park toward Edgewood figuring that we’d run into Old 4th Ward Pizza and let my beloved try it out.  But we circled their small parking lot twice and were unable to find a place to park.  We crossed the street to Krog Street Market and found a spot, planning on walking back for pizza, but deciding instead to try the market.   As we walked by the patio for the Cockentrice, we stopped and looked at the menu , decided it looked good and were quickly led to a table. 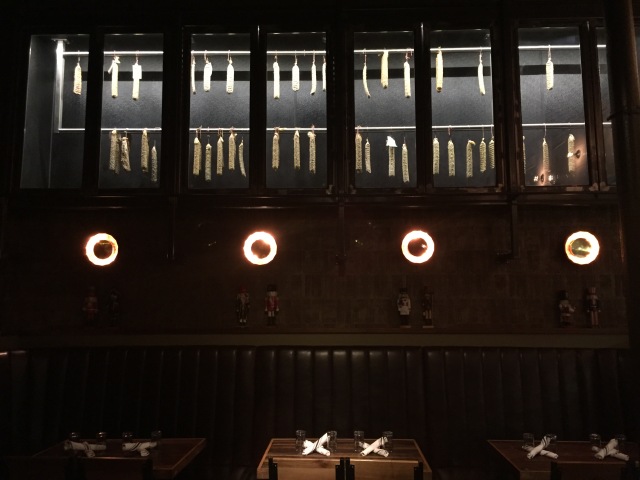 The Cockentrice, named after a Medieval dish consisting of the top half of pig sewn onto the bottom half of a capon (or turkey), is Chef Kevin Outzs’ celebration and presentation of charcuterie (as he has since 2010 at his own Spotted Trotter) and meat cooking.  The menu prominently features the house-made cheese and charcuterie, followed by dishes that focus on meat, in all forms and from many animals and animal parts (there is a vegetable plate).  The portion sizes get larger as you work your way down the menu.  We looked over the menu, with my dining partner noting something in most dishes (beef tongue, pork belly, njuda) that killed that choice for her. But after hearing the specials, decided that we were sharing plates.   We started with the apple and tasso salad, a mix of 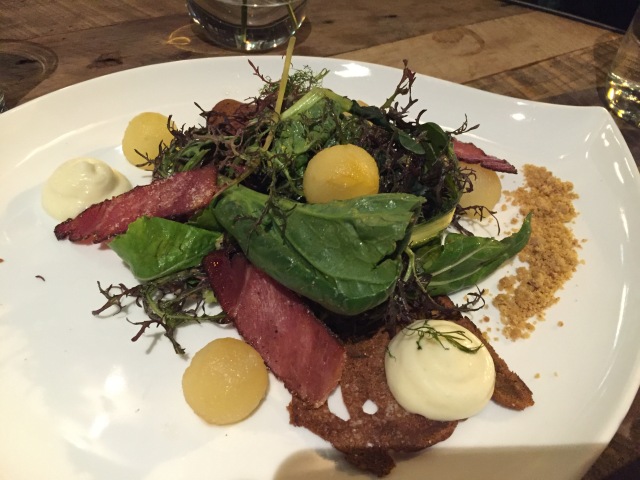 ginger apples, Madeira raisin, autumn greens, tasso (a ham-like dish from south Louisiana made from pork shoulder), ginger crumbles, a brown bread crisp and honey crisp apple mousse.  As good as the rest of the meal was, this salad was better.   The round bites of apple were tart and so full of ginger that you probably shouldn’t pop the whole thing in your mouth.   The mousse, which we learned after discussing with our fabulous server was made by macerating the apples and then squirting them out of a CO2 canister, was so absolutely bursting with apple flavor that I can’t think of words.  Putting a bit of each component on your fork made for a perfect bite of salad.   For the entree, we split a thirty-six ounce bone-in ribeye, 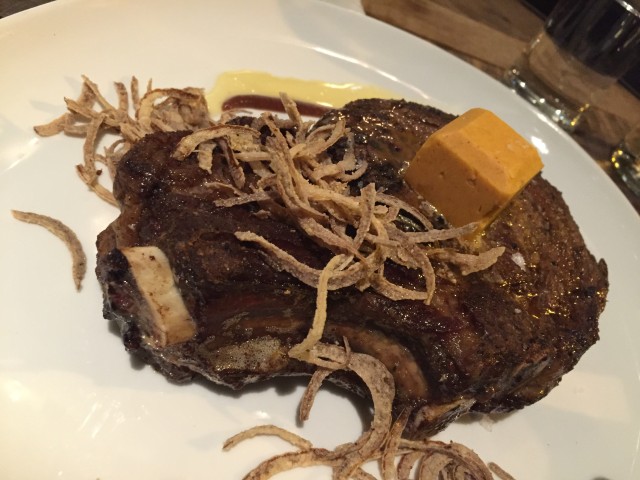 which we had them cook to medium rare at the center, allowing the outside edges to meet my beloved’s more “done” temperature desires.   We also ordered a side of the sweet potato pillows, made with white raisins, Madeira (a Portugese wine) and bacon caramel, which were described as sweet potato doughnut holes.

This description, flavor-wise was spot on, although texturally they more resembled sweet hush puppies.  Behind the sweet potatoes you can see the house-made ginger beer that we both had.  I have always thought of ginger beer as being a perfect drink on a hot summer day but it fit just as well on a chilly night.

The steak was covered with crispy onions and topped with a pimenton butter.  Not being familiar with pimenton, when we asked it was described as being like paprika.  Like paprika, it is made from dried red chili peppers, but it is Spanish in creation, rather than Hungarian, and is sold in degrees of heat intensity.  On the side was a horse radish sauce which was well received by the person at the table who enjoys horseradish (not me).  The steak was cooked to tender perfection and we cleared all of the plates.

While our evening may have started poorly, we ended up with a stellar dinner.