On a beautiful Saturday evening, as we were heading back toward home, I tossed out a couple of options for dinner of places that I wanted to try.  The answer was “whichever one is open now”.  At a little before five, from the three choices I gave, the intersection was zero.  But Craft Izakaya did open at 5:00.  We parked down the street from Krog Street Market, walked in and sat at one of the long tables in front of the restaurant, gawking at the perpetual long line for Jeni’s, biding our time.  They opened, right on time, and we were the second party in the door. 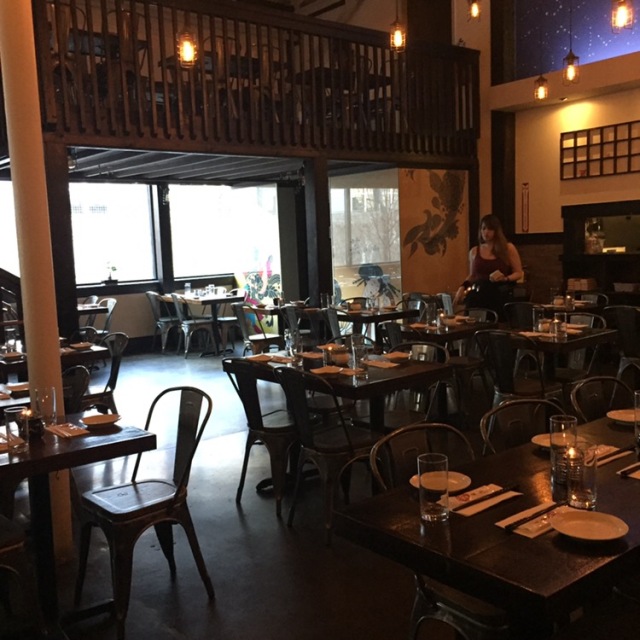 We were originally seated in the loft (see the photo below), which has seating for about twenty, but with the place empty, the R&B was blasting from the speaker in the corner, so we asked to move downstairs.  (You can see the couple ahead of us at the sushi bar.)

The music was still kind of loud, but much better.  The menu is great in that every item is pictured. I realize that this a more common feature of a Huddle House menu, but it was greatly appreciated with the variety of choices.  We’ve had it explained on a couple of occasions that an izakaya is an after-work place for drinks, which means that the menu is composed of bar food / small plates / tapas.  With that in mind, we looked for dishes to share.

We started with one of the specials of the night, a tuna tataki.

Tataki literally translates into “hit into pieces, so this is sushi grade tuna with garlic, ginger, green onion and shiso leaves, covered in soy sauce.   In talking with the server, who was very helpful with ordering and timing our plates, she said this dish was prepared by chef Jey Oh.   Chef Oh is somewhat of a sushi legend in Atlanta, having helmed Sushi Huku (still on the list) for the last eight years.  If this deftly seasoned dish is an indication, it looks to be a great meal.  This was followed by a shrimp avocado lemon roll.

I’m not the largest sushi roll fan, but this one was excellent.  It is quite possible that I exceeded my “share” of this plate, forcing the order of a second,later in the meal.  It was that tasty.  At about the same time, the order of mini agedashi tofu arrived. 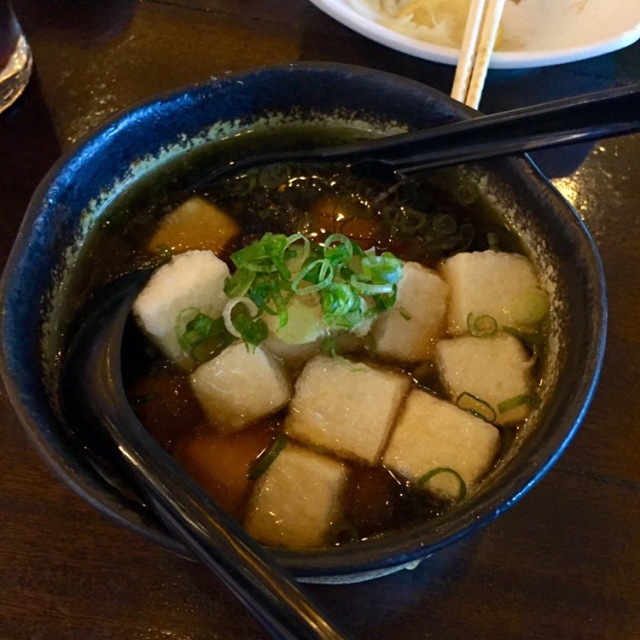 Agedashi tofu is silken (kinugoshi) firm tofu, which is cut into cubes, lightly dusted with potato starch or cornstarch and then deep fried.  This is served in a hot tentsuyu broth made of dashi, mirin, and shō-yu (Japanese soy sauce), and topped with finely chopped negi (a type of spring onion), and grated daikon or katsuobushi (dried bonito flakes) – thanks Wikipedia!.  We were hoping that this dish would be like the tofu pancake that we enjoyed so much at Yet Tuh.  It was not the same, but my beloved enjoyed it, particularly with the broth.   Then came the yakisoba.

This dish of fried buckwheat noodles, cabbage, carrots and chicken, in what tasted like an oyster sauce, was addictive.  It was topped with bonito flakes (thin dried tuna) that crinkled and waved with the heat of the dish.  Alongside it arrived the spicy tuna ball (think the izakaya equivalent of chips and dip).

In this case, the chips are battered and fried nori (seaweed).  And the dip is spicy, almost ground, ahi tuna with sriracha, served underneath sliced, pressed avocado with a dipping sauce of saucy mayo.  An excellent dish.   And the yakatori, showed up, too, about the same time.  (Did we over order?  There’s always that possibility…) 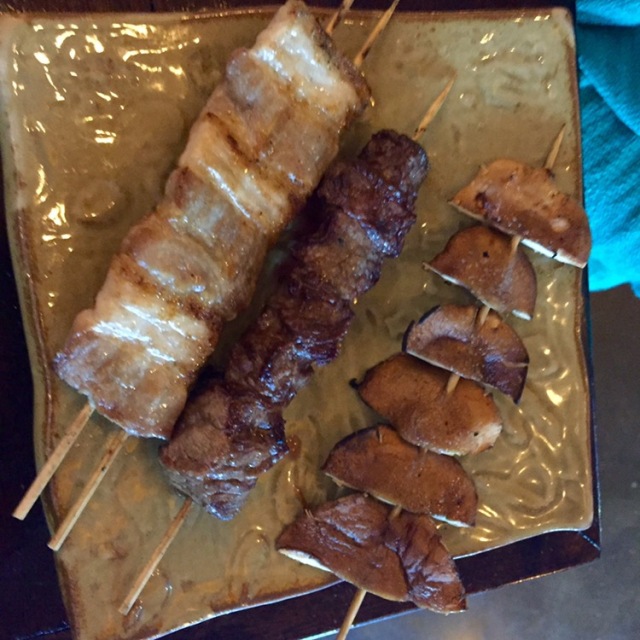 Yakatori are skewers of  something (in our case, pork belly, beef tenderloin and shiitake mushroom) grilled over charcoal (they import their’s from Japan).  These were

served with three dipping sauces (the best of these was gochujiang based – highlighting the Oh’s Korean heritage).  How were they?  I ordered a second pork belly skewer, along with that shrimp avocado roll.  (I guess we didn’t over-order.).

We plan to go back, with our kids, and finite things in mind.  It was a fun, filling dinner.  And, by the way, the textured handles on the chop sticks were awesome.