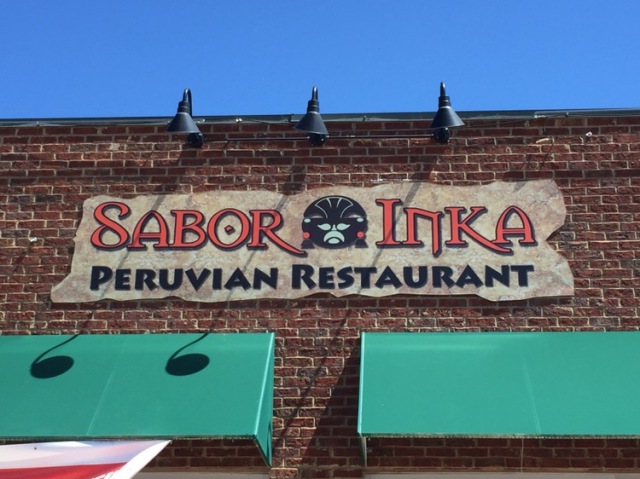 Heading out for lunch on lone wolf Thursday, I was looking for something new. I headed down Pleasant Hill Road towards 29, a stretch of road on which I usually don’t drive.  Then I saw the sign above, with a banner underneath it that said that they were now open seven days a week, and I was intrigued.  I’d never had Peruvian food, so I had to go to Sabor Inka.

The decor was very nice and well lit, and the place was fairly empty.  I was exploring the menu and couldn’t decide on what to eat, but I did decide to try a diet Inca Kola.  I’d never had one of these before, but found that it was invented in 1935 in Peru with the primary ingredient being lemon verbena.   The taste is almost as unique as the color.  But not quite.  Interesting is a word I’d use – it was intensely fruity.  And, to close the loop on this subject, it is manufactured everywhere in the world, except Peru, by the Coca Cola company.   This picture below does not well depict just how yellow this drink actually is. 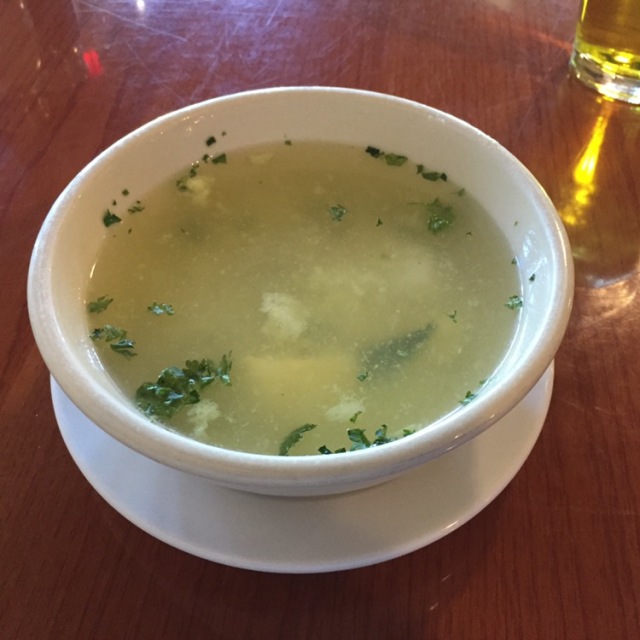 The lunch special included either soup or salad, so I chose the soup of the day: sopa de papa – potato soup. There are apparently two types of potato soup – one cream based and one broth based.  This soup was chicken broth based and had chunks of egg yolk (like from a hard boiled egg), potatoes and cilantro.  It was a good start to the meal.  For lunch, I chose the churrasco.

Churrasco refers to charred meat – here it was a sliced beef tenderloin dish – topped with a chimichurri sauce, served with rice and plantains.  The beef was good, thin sliced and cooked to medium well.  And the chimichurri (which apparently started in Argentina, prior to spreading throughout South America, then the rest of the world) was tasty, although I’m not the biggest fan of parsley and it was onion heavy.

But the best discovery of the meal was the aji verde sauce that they brought to the table on the side.  I took a spoonful from the ramekin and put it on my rice and I was in love.  It was light green, creamy and had enough “kick” to it to definitely get your attention.  The sauce is made from ground cilantro (for color and flavor – the color can also be derived from lettuce or the like if the chef is cilantro averse), jalapeños, oil, garlic and salty and pepper.  You have to be careful and not let it overpower the other flavors, but it was extremely tasty.