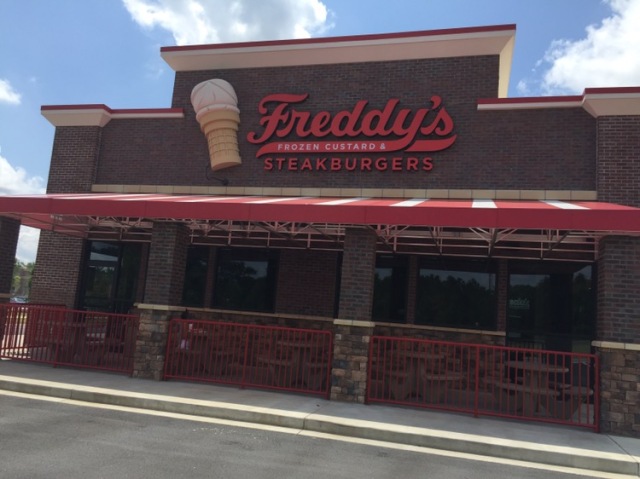 There’s always excitement when something new opens around the office.  It provides an opportunity to expand our rotation and, sometimes, to try some place new.  Or just some place that is “new to the area”.  I ate at mt first Freddy’s Steakburgers in Wichita (you can find that blog post here) and when I saw that there was now one open on Peachtree Industrial Boulevard, I made plans for lunch with a couple of our IT guys.
If you 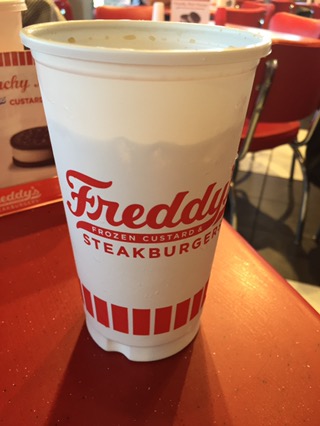 ‘ve not been to a Freddy’s, and most Atlantans would not have had the chance to in this town, prior to this year, you can think of it as a cross between Steak-n-Shake and a 1970s Dairy Queen.  I was surprised to find that this location had been open for two months and that there will be seven locations in the metro area by the fall (if you count Cartersville and Athens as the “metro area”.  I contemplated the picture menu and ultimately ordered a number eight: the  double steakburger, California-style.  As a combo – combos include either fries or onion rings and a medium drink.

That’s one of the similarities to Steak-n-Shake – the use of the term “steakburger”.  And the “California-style” likely hearkens to an In-N-Out Burger.  There’s a picture on the wall at Freddy’s of when he went to visit his brother in California and that’s supposedly where his love of the steakburger (this may or may not be a copywritten term) began. 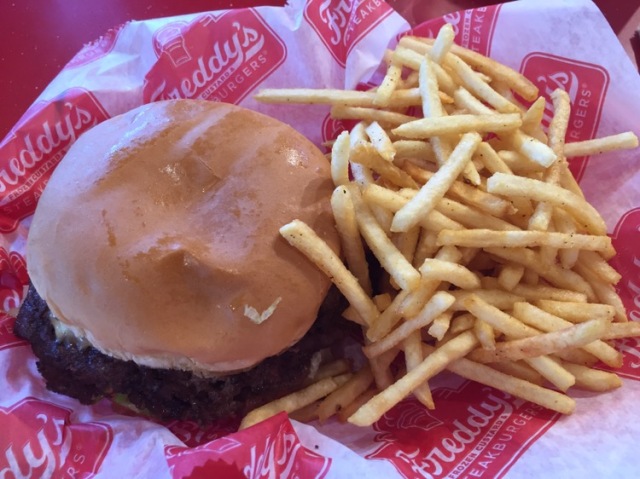 Standard burgers are topped with mustard, length-wise pickle slices, mayo and onion.   California-style adds lettuce, tomato and Freddy sauce.  Freddy sauce is also available from a dispenser to dip your fries in and it is much like Thousand Island dressing.

It’s not exactly “fast” food, as they start cooking your burger when you order (similar to Five Guys) so it takes a few minute, but they do make a mighty tasty burger.  They are small patties (eighth of a pound, maybe?), cooked flat on a griddle, on a very fresh bun.  But, oh the fries!  They are the size of the potato-sticks-in-a-can that I ate as a kid and are highly addictive.  I said in my original blog that “if there was one of these in town, it would be my choice above the other premium chains (Steak-N-Shake & Five Guys here – In-N-Out further west)”.  I guess I’ll have to keep my word –  I have eaten there twice in the last two weeks.  (The Zomato link below is for the location in McDonough – Duluth’s doesn’t seem to have one yet.)