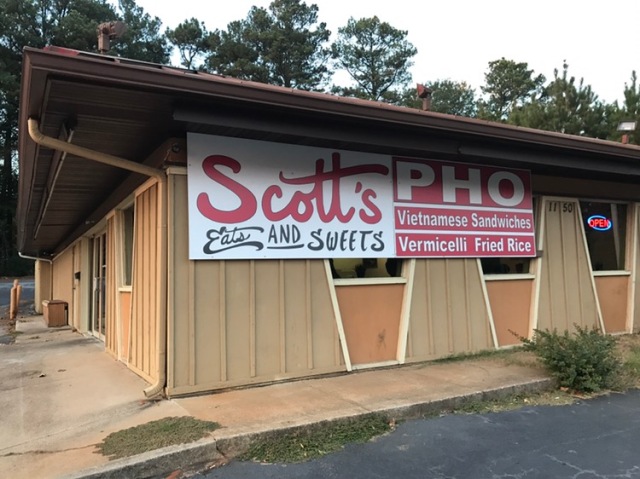 There was a recent Yelp email about the best pho places outside the perimeter (off Buford Highway) and I was shocked (SHOCKED, I say) that one of them was in Mableton.  So tonight, when we were looking for a place to eat, and didn’t want to drive into “the City”, I suggested that we try Scott’s Eats and Sweets.

I googled on the map and found the location, on Bankhead Highway, somewhere between Hawthorne Plaza and Barnes’ Store.  I grew up in Mableton, so I knew that it had to be either the (former) pizza place or the (former) Waffle House.

Pulling up gave me the idea and walking in, had the cigarette-burned wooden booths been there – would  have affirmed that it had been the pizza place.  I confess – I had to poll on Facebook with high school friends to determine whether it was Ken’s or Pizza Hut.   I grew up about a mile from here and couldn’t remember which it was.  For those curious, it was a Pizza Hut. 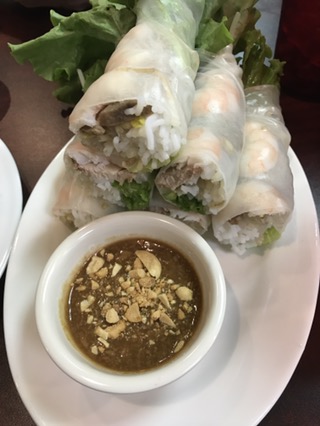 arted with the spring rolls, which were really big, and had big chunks of pork (usually ground instead) and while shrimp.  The ingredients were fresh, but the rolls were different than most that I’ve had. I’ll go with the pan-fried dumplings next time.

Right after the rolls, the pre-pho-plate arrived: mint, jalapeños (that were extremely fresh), bean sprouts and lime.

My beloved (the cool cat across the table in the photo) chose the pho ga (white meat chicken).

She really enjoyed the soup, particularly after adding some – okay, a lot of – additional  cilantro, lime, soy sauce and a jalapeño.  The only complaint was that the chicken, itself, was not that flavorful.

And large was a great description – the bowl on the rack behind the counter described it as 5 cups, versus the 3 cups in the small.  Even though the menu describes the steak in the beef phos as “rare”, the soup is hot enough that it cooks it, like a hot pot. I added in a couple of jalapeños (the trick is to drive them to the bottom of the bowl to impart their heat), some – okay, a lot of – chili paste, some sriracha, mint and lime.  The pho broth itself had a touch of sweetness and blended with my hotness, this was a great bowl of soup.  The large was a bit much, but I finished all of the noodles, all of the beef and most of the broth. The small would hace been sufficient (maybe with the amount of meat from the large).  That’s a good plan for the next visit.

This was the quality of meal that I wouldn’t expect to find off Buford Highway and we’ll be back.  I asked the server how this quality of Vietnamese restaurant ended up in Mableton. He said it was simple – the owners lived there.  The fellow that owned the Subway, across the road, had helped them get into this country and they came to where he is.

Bravo to the community they moved into for allowing the restaurant to flourish.  The crowd was small while we were there, but it was very diverse: white, African-American, Hispanic and Asian.  What a beautiful site.