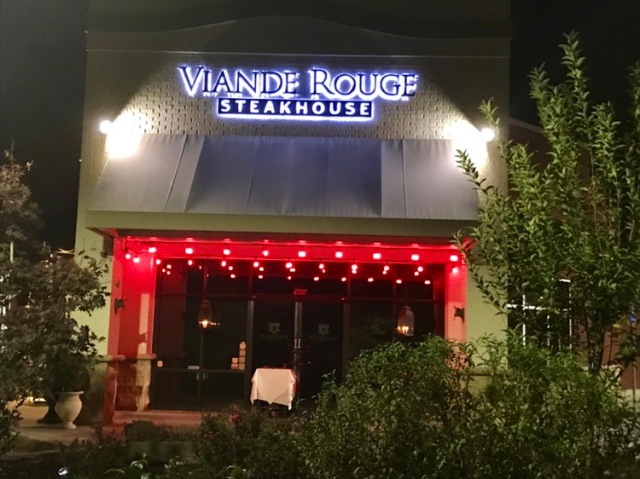 I was heading into Atlanta from the office one evening for a concert and looking for a place to eat in between the two.  I have had Viande Rouge Steakhouse on my list for a while, but it’s a long haul back to Duluth for dinner, so I never seemed to make it.  Tonight, eating solo, was my chance to knock it off the list and not spend a fortune.  I arrived at the nondescript strip mall around 6:30 and was shown to a table in the corner of the nearly empty restaurant.  There were three people at the bar – two older men together at one end and a woman at the other.  They were discussing, loudly, their opinions on the week-old election.  I was very glad, as their conversation continued, that I had chosen not to eat at the bar.  And kind of embarrassed for them, about their conversation.

The decor is classic French steakhouse – very dark and fancy-looking.  I had recently read an Todd Kliman’s article in the Oxford American “Coding and Decoding Dinner” and was struck with how many of the codes he identified were unfolding around me.  This place was designed for the three at the bar.

The bread service arrived – the lavosh was excellent.

I went with simple – steak and a potato.  This was a steakhouse – what could be a better choice?

A potato that doesn’t arrive to the table so hot that you can’t eat it, at a French steak house, seems to be a faux pas.  It barley melted the cheese and butter.   It arrived alongside the steak. 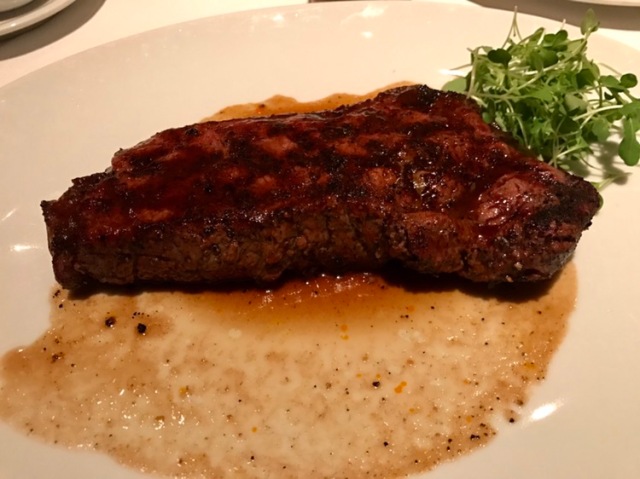 Which was not un-adulterated (the way I prefer I meat).  You would think the menu would have mentioned that they “prepared” the steak, beyond cooking it.  The steak was cooked well (temperature wise), but was lacking in overall flavor.  Bland.  Blaise.  It was a fair steak.  At the price of a really good steak.  I won’t rush back.  There are plenty of great steakhouses in Atlanta.