September 16, 2017 · by willoughbyandy · in Burgers, Midwest, Oklahoma · Leave a comment

We weren’t leaving Louisiana in the broad daylight, but we were heading home from Winfield and looking for lunch (in all the wrong places?) when we got to Tulsa.  (Note: That’s TWO thinly-veiled 80s country song references in one sentence!)  This placed us at Linda-Mar Drive In (actually across the street in the grocery store parking lot, since we were hauling a trailer) around 12:15.  Linda Mar appeared on my radar from the Hamburger America book and has been in business since 1966.  Home of the “Westside Burger”, according to the wall signage and my dog-eared book, I knew what I would be having.

We walked across the street and through the front door to find the menu board to the right and a walk-up counter in front of us.  Being Coke people, that Pepsi ad in the center is never the best of signs.  One of daughters favorite answers when she orders a Diet Coke and the server asks: “Is Diet Pepsi okay?”

“Sure, if I can pay you with monopoly money.”  (We don’t mess around about soft drinks.)

Opened by Walt Cook, he named it after his daughters Linda and Margaret.  It has stayed in the (extended) family and up until 2008, when it changed hands to a brother of the brother-in-law (and current owner), it was only open until 2:30 and closed on the weekends.  He extended the hours to 9:00 pm, opened on Saturdays and opened a location in East Tulsa (Linda Mar 2) in 2014.

I chose the Westside Burger (a double cheese, double-patty on Texas toast), hold the pickles, hold the lettuce, 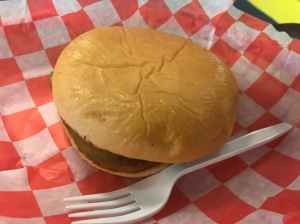 My beloved was not as hungry as I and ordered a “junior” burger.  I’m not sure what made it a junior burger as the patty seemed the same size as mine and completly filled the over sized bun.

This is a classic burger joint and filled me up for a day of driving home-ward.  Hamburger America comes through, again.