Before heading back home from a business trip to Charlotte, I had questioned a couple of the local attendees at the meetings about Charlotte institutions that we might not know about.  One of them mentioned Price’s Chicken Coop, which has been serving up hot, fresh fried chicken since 1962.  They were already on my radar from Garden ‘n Gun’s 2017 Fried Chicken Bucket List, so when the conference ended early and we were rolling out of town at 10:45, I asked “that’s not too early for chicken, is it?”

It is a simple place with a counter lining the front, backed by the kitchen.  The menu, in the center above (and also, conveniently, on the carry out box, in the photo below) is definitely chicken-centric.  They do have shrimp, fish, burgers and barbecue as additional options.

Price’s opened, back in 1962, in response to a local manufacturer who wanted a hearty, reasonably price lunch option for his warehouse workers.  Still owned and run by the son and nephew of the original founders, and still cash and carry-out only, it’s been a mainstay in South End for nearly sixty years.  We ordered a quarter chicken dinner (white), watched them fry it and then walked to the car. 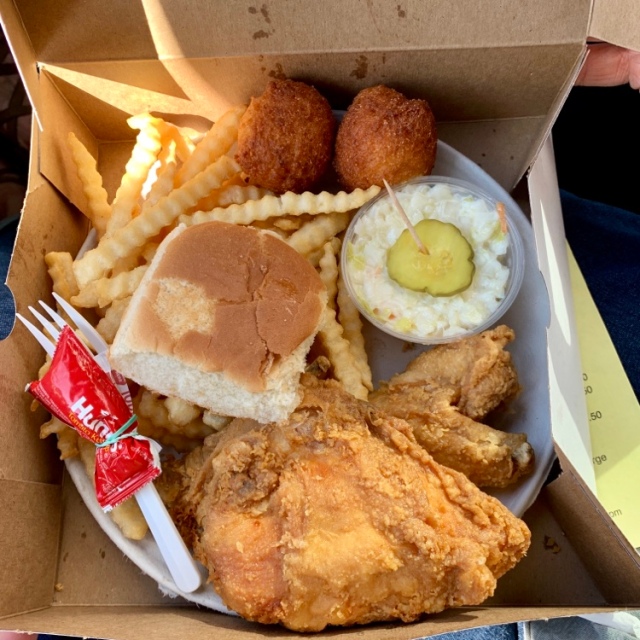 Priced under $9.00 ($7.75 + tax), it was a full and fairly priced meal.  The skin on the chicken was crispy and light and the meat was tender and moist.  It was served with hush puppies (like everything else in NC seems to be) and the fries were as hot as the chicken.  And who doesn’t want a ketchup packet rubber handed to your fork <g>?  This is the quintessential “local” place.