While in Wilkesboro, NC, for MerleFest, we went roaming one day to Mt. Airy.  Most famous as the hometown of Andy Griffith, it is promoted as a modern-day Mayberry – right down to Floyd’s barber shop and a Mayberry police car parked on Main Street.  But we were there for a different purpose – the pork chop sandwich at Snappy Lunch.  It is actually the only Mt. Airy business actually mentioned on the Andy Griffith show.

What had once solely been a lunch counter, has expanded to a larger lunch room, with seating against the walls and in an added-on room behind the cooking area (three counters, 10 booths and 12 tables).  We found a couple of seats at the main counter, as we walked in the door and ordered a couple of the “World Famous” Pork Chop Sandwiches: 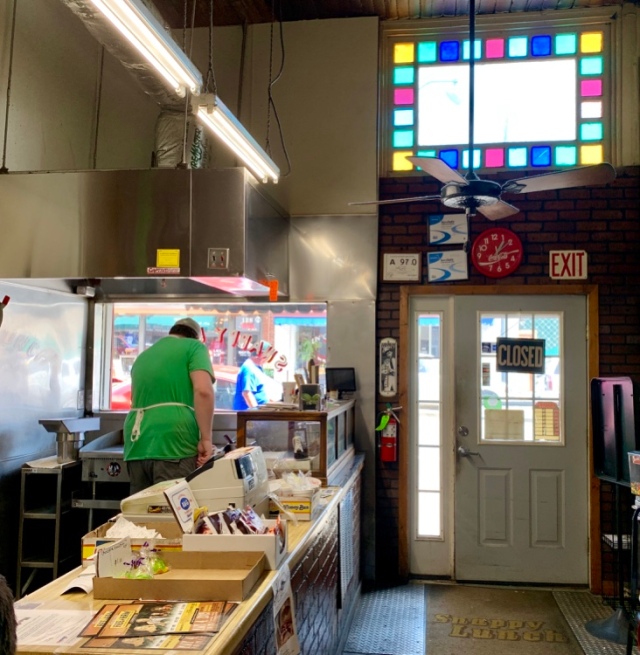 three and a half ounces of pork chop fried (at the griddle in the window, above), served on a hamburger bun with slaw, mustard, chili sauce and tomato.  This is one messy sandwich!  The story on the menu talks about Charles’ Dowell’s creation of the accordion-cut tenderloin sandwich after he completely bought the lunch counter in 1960.

Aside from being a very messy sandwich, it was a very tasty sandwich.  A perfect mix of components that were greater than the sum of their parts.  The tomato was as fresh in April as a mid-summer Georgia tomato, fresh from the field.  So good in fact, that I asked the young lady where she bought them.  A s she tried to explain how to get to the produce stand they came from, and saw my confusion, she offered just to sell me a few.  We walked out with happy stomachs.  And a small bag of tomatoes for later.