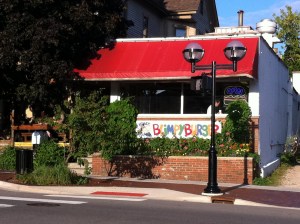 After Motz’s, I don’t know that I could have a BETTER burger, but I still had two hours before I flew home, so I definitely could have a DIFFERENT burger.

Combining a map, where I was, and the Hamburger America app, I realized that I could make it to Ann Arbor in time for a stop at Krazy Jim’s Blimpy Burger and still get to the airport in time for my flight.  I was looking for a different burger and I had heard that Krazy Jim’s was a different kind of burger joint. 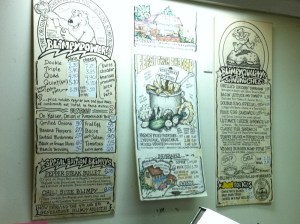 The Menu at Krazy Jim’s

The menu was daunting, particularly compared to the rest of the menus for the day.  And the format was very different.  No pleasant waitress who has worked there for twenty plus years.  Three young guys, who took the order cafeteria-style and did so in the manner of an interrogation.  You didn’t volunteer what kind of burger you wanted, you waited to answer the questions as they were asked.

That was the first round of questions. And don’t talk to them about cheese, until they ask you what kind you want.  After they “cheese” it, they slap it on a bun and hand it to the last guy who puts on the condiments and rings you up.

The two most interesting exchanges that I heard from behind the counter:

Exchange 1, to the lady behind me: “What kind of burger do you want?”
“Two doubles.”
“They both for you?”
“No. One’s for [points behind her] him.”
“Can he not talk?”
“[Obviously flustered] No.”
“You know, we have deaf folks in here. We have blind folks in here. They all manage to order for themselves.”
It actually worsened for the guy when he tried to order his own cheese and the line cook told him to tell the woman what he wanted so she could tell him.

Exhange 2, overheard from my table:
“Hey, guy – you do know that you’ve got a really big burger on a really small bun?  You sure you don’t want to change that to a Kaiser roll?”

I paid attention and knew what I wanted.  So I ordered confidently. 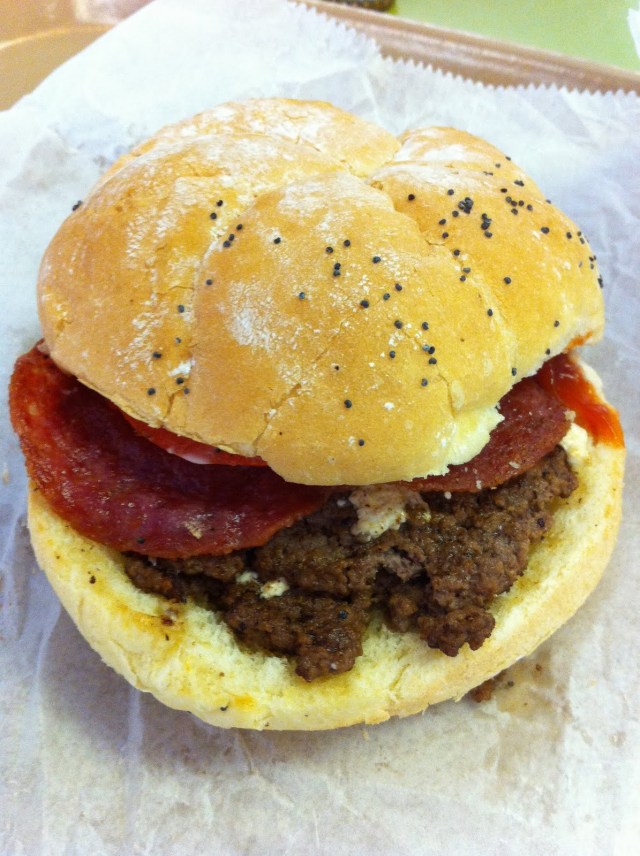 It was a novel combination. And a good burger.

But I did wonder, on the way to the airport, if I had time to get to Motz’s for another double.