Several months ago, I read in the local news about a new burger joint coming to town, Five Napkin Burger, in the old space where Nickiemoto’s was located at the corner of 10th and Piedmont.  This New York based restaurant, with outposts in Boston, Miami and here, is an up-scale burger joint.  They even take reservations, for crying out loud.

Looking at the options for appetizers, Jo decided that we needed to try to the onion rings, so we ordered a “stack”.  The corn meal crusted rings appeared atop a skewer with two dipping sauces – bleu cheese and a 5N sauce.  Not being an onion ring guy, I abstained, but Jo, and the couple we were dining with, said they were mighty tasty.

On to the entrees, I ordered a burger – what else?  Jo went with the fish tacos – always a suspect choice.  You never know what you’re going to get.  So with the big choice out of the way, I had to decide on a side – french fries, tuscan fries, tater tots, sweet potato fries or rings. 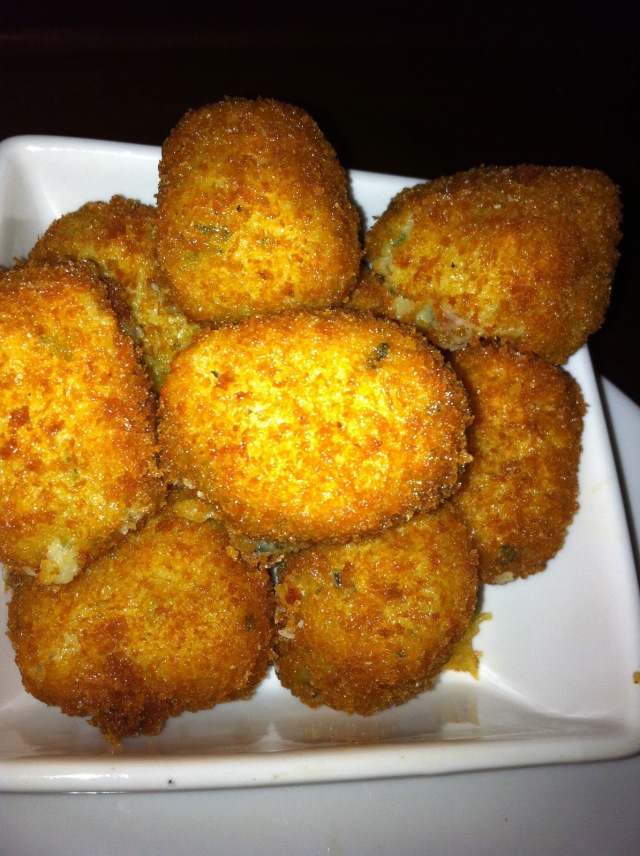 I’m a sucker for tater tots.  But let’s talk about these suckers.  They were HUGE.  Hard to tell from the picture, but they looked like jalapeno poppers (roughly 2″ x 1″ x 1″).  So I took a bite and was I surprised.  First it was HOT.  After the cooling off period, I began to explore the taste.  These are fried blobs of battered chive mashed potatoes.  What a novel idea.  And a really good taste.

And then came the burger – ten glorious ounces of fresh ground beef, with pimiento cheese (their standard burger has gruyere cheese – ooh-la-la) and a rosemary aoli on a buttered white roll.

Wow is the only word that comes to mind.  It is one of the best burgers in the city.  I needed to make a second visit to determine its exact place in the top five. So we did.  And then a third.  It’s number  three, in my book, at the moment.