Chicken and the Egg, Marietta, GA

One Sunday, after church, we were looking for some place new to eat.  As we’re pulling out of the parking lot, I hit Open Table and searched for places nearby and took a look.  Up popped Chicken and the Egg, near the square, on Whitlock Avenue, in Marietta.  We read the reviews and decided to give it a try.  Pulling up, you’d never guess from the outside that there’s a decent restaurant inside.  It looks fairly nondescript from the parking lot.

Their premise is “Modern Farmstead Fare”.  Apparently, every new Southern retauranteur’s grandmother (regardless of their place of birth – Atlanta, GA, Jackson, MS or Long Island, NY) served pimiento cheese and deviled eggs at all dinners.  They’re on EVERY menu.  So we started with the pimiento cheese to see how it stacked up.

It stacked up fairly well.  Not as good as that as Rosebud (in Morningside) or Local 3 (kind of in Buckhead) – my current favorites – but very tasty.  We (technically, I) emptied the jelly jar.

In case you aren’t familiar with Nueske’s bacon, it is mighty good stuff.  Apple wood smoked and cured with love.  Mmmmmm.

I believe the true test of the caliber of a southern cook is in their ability to properly fry chicken.  You’d think that a place with such a fowl name would prominently feature their chicken.  So I ordered the fried chicken with mac-n-cheese and green beans.  On a side note, ordering the green beans was a challenge – I was trying to determine how they were cooked (French-style?  Slow-cooked -in a pressure cooker, with fatback, like my mom, is the best answer?) and couldn’t seem to get the waiter to understand my question. 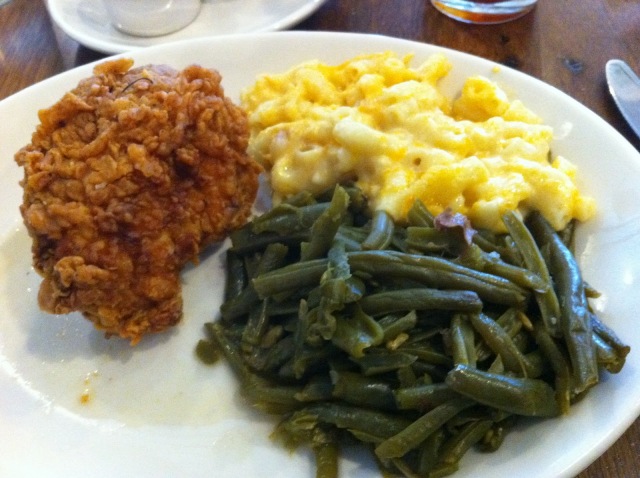 When my meal arrived, the beans were indeed Southern style.  The mac-n-cheese was fresh.  And the fried chicken was good. Not great, but good. We’ve been back several times to eat there again, but didn’t feel the need to have the fried chicken again – although I did order chicken and waffles one night and wished I’d of had a burger instead.