To close out March, we went with good friends to Kyma.  We had an early (6:15) reservation and as we arrived they took us straight to our table.  The place was fairly empty, but it filled to about 75% of capacity during our visit  I love when you’re at a restaurant where the waiter pays attention to the small details.  As he comes to the table, he greets us, “Hello, Mr. Willoughby.  How are you all this evening?”

He explained the menu, made a few recommendations and left us to make some decisions.  Two of the menu choices were “tastings”, one comprised of three spreads + pita pieces and “mezes” (appetizers), the other tasting menu included three spreads, mezes and added fish.  Once we decided whether or not we would be able to agree on everything (and order for “the table”) our first decision was whether or not we wanted a fish and what that would be.  It wasn’t too long of a process, but we decided on lavreki (European Sea Bass).  More about that later.  We decided that there was one of the four spreads that none of wanted, so that decision was easy.  And it included four appetizers.  Four of us, four choices – this was going to work out well.

We started with the spreads. Roasted red peppers and feta (htipiti), something with yogurt, cucumber and dill (tzatziki sauce) and potato, garlic and olive oil (skordalia). I was partial to the red pepper and potato based ones, but we managed to clean 5 of the 6 containers.

The waiter had sold the octopus pretty highly, saying that it was the thing for which they were best known.  We discussed whether or not they still had the “suckers” on them and Yanni said that they shaved off the suckers.  (Can you imagine being the guy that has that job? We decided he was obviously the most recently hired….)  Don chose the octopus.

The octopus came to the table first, with one crispy tentacle on top.  Surprisingly, the larger pieces had the texture of chicken with a taste that was a cross between chicken and tuna.  It was actually pretty good – we finished most all of it.

Next out to the table was my choice. Since there were four of us, we actually received two servings of each meze.  I had been ready to order the pan fried kefalograveria cheese (saganaki), but Jo had changed her mind at the last minute, away from the herb crusted ahi tuna (after she and the waiter discussed the “rareness” of the tuna and he said that it was sushi-grade and best served rare).

I was now torn. But Yanni came thru, again, and said that the cheese was pretty strong and suggested that we “split” that meze between the cheese 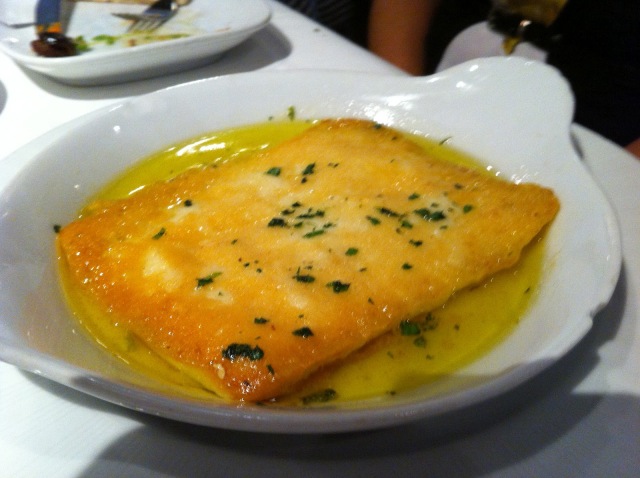 and the herb-crusted ahi tuna.  The tuna was served on a bed of pickled mushrooms.  It was closer to “raw” than “rare”, but mighty tasty.

Tina decided on the horiatiki, a summer summer salad of tomato, cucumber, red onions, peppers and a huge wedge of feta.  The tomatoes were the best tomatoes that I’ve had yet this year.  We asked from where they came, and found they were from Mr. Fresh in Florida.

Jo chose with the beet salad (oven roasted beets, butter roasted walnuts, manouri cheese and beet sorbet – apparently one can make a sorbet out of anything).

Aside from the octopus, the beet salad was the surprise hit of the table, primarily because of the beet sorbet.  It still tasted like beets to me.

Then came the fish: 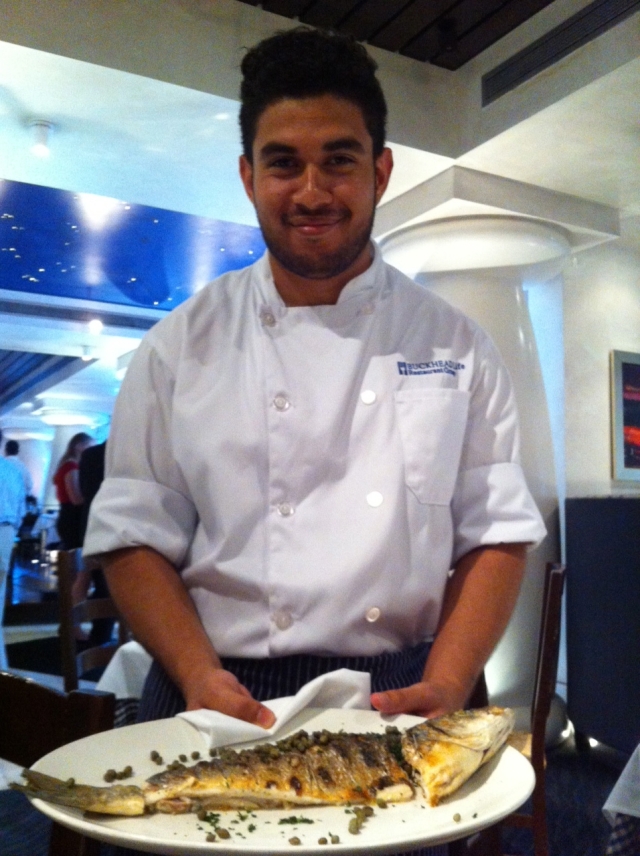 They showed us the fish, then took it back and prepared our plates.  The fish was served with capers and braised kale – only one of the four plates had more than a single bite of kale taken. 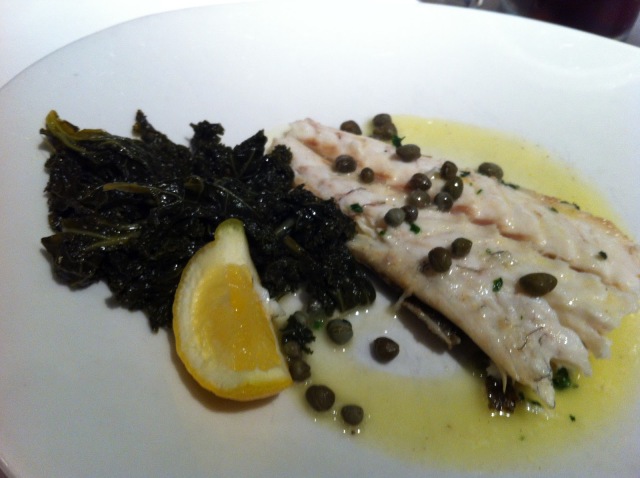 We had decided that we were going for gelato so we were going to bypass dessert, but we had mentioned that it was Mrs. Martin’s birthday, so they brought a surprise to the table.   It was pistachio ice cream and some sort of baklava.  Even though we didn’t want dessert, they cleaned the plate. 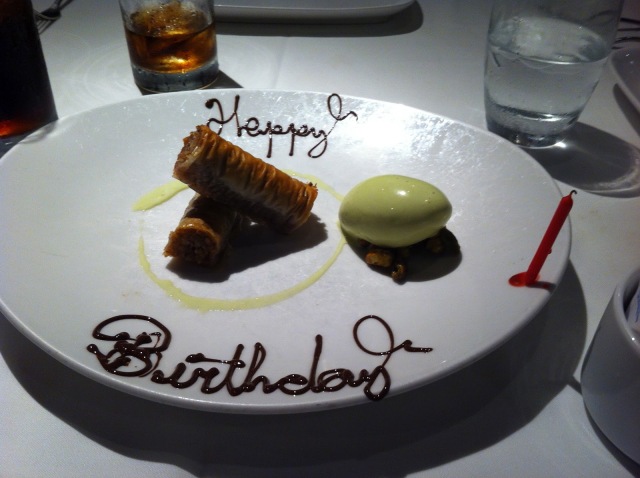 Collectively, we commented on the quality of the food and the exceptional service.  It was definitely a “big night out”, but we would not hesitate to go back.