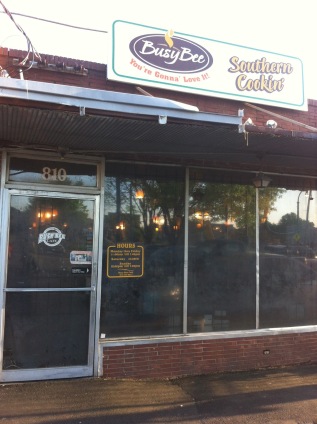 For the last several years, I’ve seen the Busy Bee Cafe on every list that was made about places to eat in Atlanta.  Since they close at 7:00 pm, they aren’t an option for dinner out for me most nights, but on a random Thursday I was driving through town at 6:00 pm and looking for a place to eat and ended up at the Busy Bee.

When I got there, the place was so packed that I could barely get into the door.  There was a tour bus out front and apparently the entire bus-load was standing just inside the front door.  I did find a spot at the counter.  Every review had raved about the fried chicken, so that’s what I ordered.

I thought that everyone there would be eating the fried chicken.  I may have made a mistake in my thinking, as the guy next to me ordered the smoked turkey legs with gravy and was nearly heart-broken when they had sold out.

The place was HORRIBLY unorganized.  It took twice as long to pay as it did to order and eat. And, before that, it took a while for them to figure out who was going to wait on me.

Honestly, it was really a gigantic disappointment.  I might try it again some time, but I’m not in a hurry to do so.