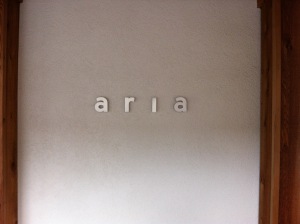 Over the last several years, Aria has kind of faded from the limelight of Atlanta dining. Not because of a degradation of service or a decline in the quality of the food, but due to the overwhelming number of restaurants in Atlanta. Maybe it was the change in the dining scene focus to New Southern (then to tapas, then to house-cured meats, then to food trucks, then….), but last August, Atlanta Magazine named the city’s fifty best restaurants. It was then that we (that should really be an “I”, but I blame Jo also) made it a goal to get to all of them that we could. Aria made Atlanta Magazine’s list, a list in which they ranked the first ten, and then listed the others, coming in at number nine. Our visit to Aria took us over the fifty percent mark.

When we arrived, our entrance was the first challenge. From the bright outside, into a dark interior with a step down that you couldn’t see, almost had me falling into the maitre’ d’s stand. That obstacle conquered, we were led to our table. Second challenge – the interior has my least favorite type of seating – tables against a wall with banquet seating on one side and chairs on the other. This always leads to a situation for me: my table is inevitably too close to my neighbors; and I can’t carry on a conversation comfortably because I feel like I am sitting at a table with strangers. This night, to my left, was a mother and daughter. Tidbits of their conversation:

“He took them to California? That’s the WORST place he could have taken them.”

“We know a lawyer there. She’s actually a Federal attorney…”

“Do you want one of these scallop. Because you are going to share that spare rib, aren’t you?”

The highlight – when it was time for desserts, the daughter ordered white chocolate martinis for both of them. Three minutes later the server returned with the news that they only had enough white chocolate for one martini. Three second pause. “Okay, mom. What do YOU want?”

On to the food. Looking at the appetizers, nothing really lit my fire. There wasn’t anything that I really “liked” – asparagus soup, seared foie gras, potato and goat cheese ravioli (the server said the ravioli was heavy on the asparagus), lobster cocktail, flash fried oysters and crab cakes. And four salads. Nothing thrilled me, so I ordered the scallops. 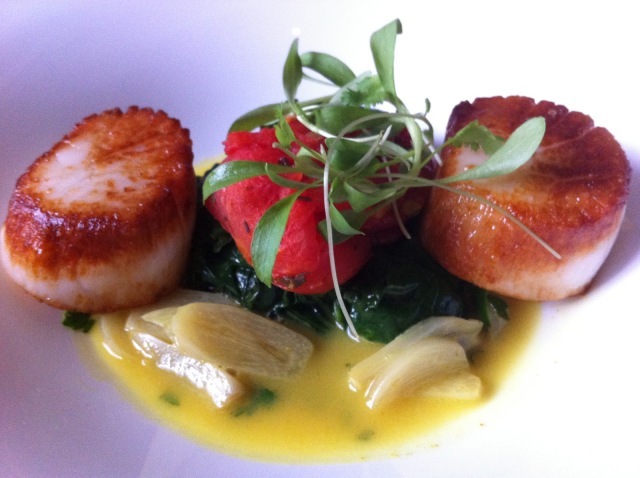 I’m not a huge scallop fan. That’s a roma tomato in the middle, on a bed of spinach with madras curry, cilantro and lime. Once, I was blown away by a scallop (at the Woodfire Grill – I swear they could have served me tennis shoe and they would have made it taste good), but most of the time they’re just okay. This was better than okay, but it wasn’t anything I’d order again.

Jo went with the beet salad.

She was kind enough to share. Still tasted like beets to me, but she said it was very good.

She also ordered the sole with roasted cauliflower, potatoes, mushrooms and fiddleheads (yep, fern parts). The fish was crispy around the edges and firm, yet flaky. Covered with capers in brown butter, with a tarragon and lemon sauce.

The server said that the spare ribs were one of the chef’s specialties, so I went with that. It was a single spare rib, served off the bone, topped with pickled ramps and trumpet mushrooms and served with whipped potatoes and a white corn and lady pea mix.

I’ve always been the kind of guy that ate his way around the plate, one item at a time. Always avoided casseroles and mixed vegetables, to the point of wishing that all of my meals were served on those quartered plates like we had in elementary school. But in the last ten years, I’ve branched out and begin to eat crazily. Salads. Peas and mashed potatoes at the same time. The spare rib was very good, but the real taste wonder was the mix of everything on the plate.

It was our “big night out” and it was good. I don’t know that I’ll rush back, but I’d recommend it to someone looking for a good Buckhead dinner spot.