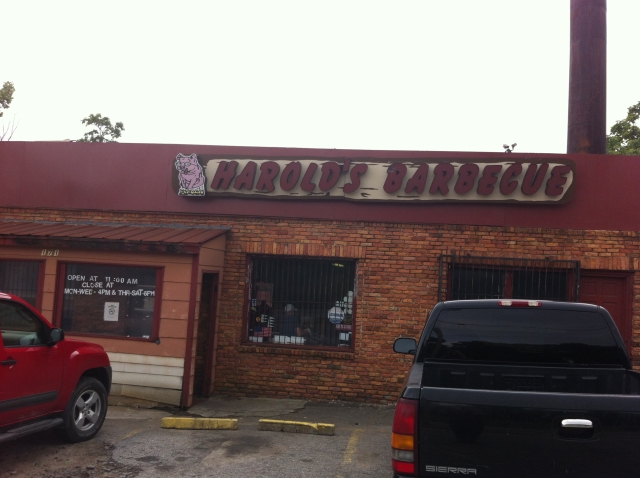 Oh, how the mighty have fallen.  When I was a kid, Harold’s was THE place for barbecue.  Open continuously since 1947, frequented by celebrities and immortalized by Lewis Grizzard.  Not to mention, my father’s favorite barbecue place when I was a kid.  My favorite Harold’s story belongs to him.

I actually called him 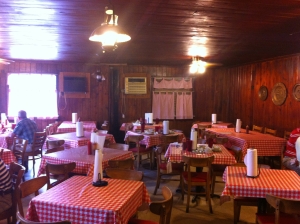 on the way home from work today to refresh my memory of the tale.  It was 1984 and mom and dad had taken another couple from  the suburbs into the wiles of downtown Atlanta on a Friday night for dinner.  They went to Harold’s for stew and corn bread.  While they were in the back room (pictured above), someone at the counter started getting rowdy talking with the man behind the register.

The customer pulled out a pistol and laid it on the formica counter.   The proprietor (likely Harold’s son) pulled his pistol out and laid it on the counter.   Two men, two pistols on two and a half feet of counter.   Dad asks his friend, “I don’t see a back door.  Where do you think they want one?”   As the conversation heats up, a man gets up from one of the tables up front, walks up behind the confrontation customer and whacks him on the back of the head with a slapjack.  Then he takes him out to his unmarked car, puts him in the back seat and comes back in and finishes his barbecue.

Over the last thirty years, I’ve been to Harold’s 15-20 times.  When we saw on the news two weeks back that they were closing last week, we were surprised but not shocked.  Then I saw on the news last Thursday that the response to the news of their closing had been strong and they were going to remain open.  We were talking about it on Friday and decided that we needed to make our final pilgrimage.  On Monday, three of us left the office and headed south on 85.

When we got there, there were 15-20 folks in the restaurant, most of them appearing to be folks like us who had come in for a last visit.  The waitress was shocked that we needed menus, but one in our party had never been before.  While we were waiting for our drinks (we had a choice of water or sweet or un-sweet tea – “our fountain machine is brooken”), we overheard someone asking the other waitress how long she had worked at Harold’s.  Her answer – “I’ve been working here since 1969, but they couldn’t put me on the payroll until ’70, ’cause I was only 14.”

When she came back and took our order, I decided to go all out and get a combo plate (meat, slaw, stew and cornbread) – I wanted pork and ribs.   She asked if I didn’t want the beef, as the combo was all three, so I told her to go ahead.  I wanted to replace the cole slaw with fries – “We ain’t got no French fries, the fryer’s broken” – but she said she’d bring me Lay’s chips instead.   And I ordered a “stew dog”, as I might not get another chance.

Then the plate arrived 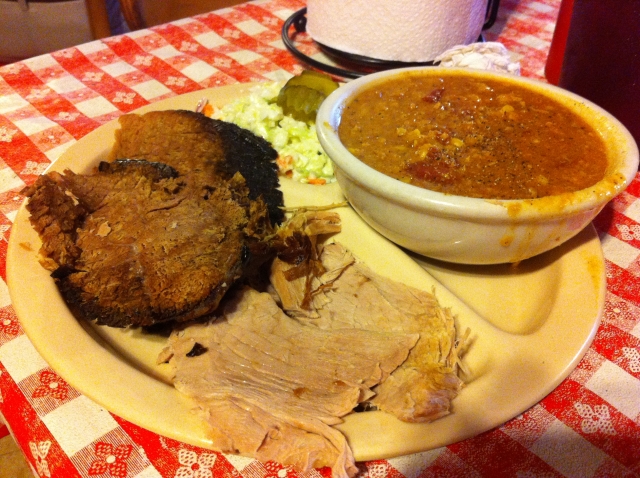 A couple of issues:

Note the cole slaw.  She never did bring the chips.

There is no corn bread.  It finally showed up as we were almost through with our food.

My ribs came out about five minutes later 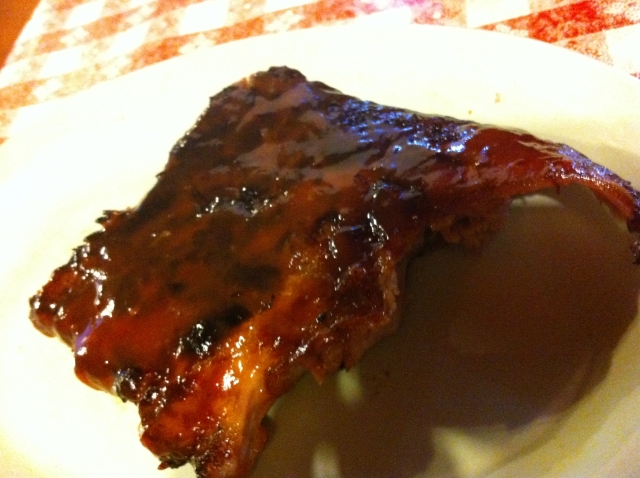 There were three of them, with the meat for two, at best.

The beef was dry and tough. When I left itr all on my plate, the waitress told me, “We finally got some beef in. We’d been saving up to get some ’cause the price is so high, and now it’s tough.”  She did adjust my bill, though.

The stew dog never did show up, either.

There was a time that Harold’s was the place to go because the barbecue was that good – it was either there, Malear’s or Sprayberry’s in the 70s.   Now it was a place to go before it was gone.   Adieu.