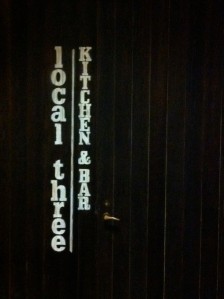 (This is actually a compendium of several visits)

One of our favorite dinner / lunch spots is Muss & Turner’s in Vinings.  When we saw that they were opening a new restaurant with chef Chris Hall, Local Three Kitchen & Bar, we got excited.  They took over the old Jo-el space off Paces Ferry. Our first visit was for dinner.

Very open space with a fairly lively bar scene.  For dinner that night, I had pork tenderloin with spaetzle (kind of an egg noodle) with chard and vanilla pears. 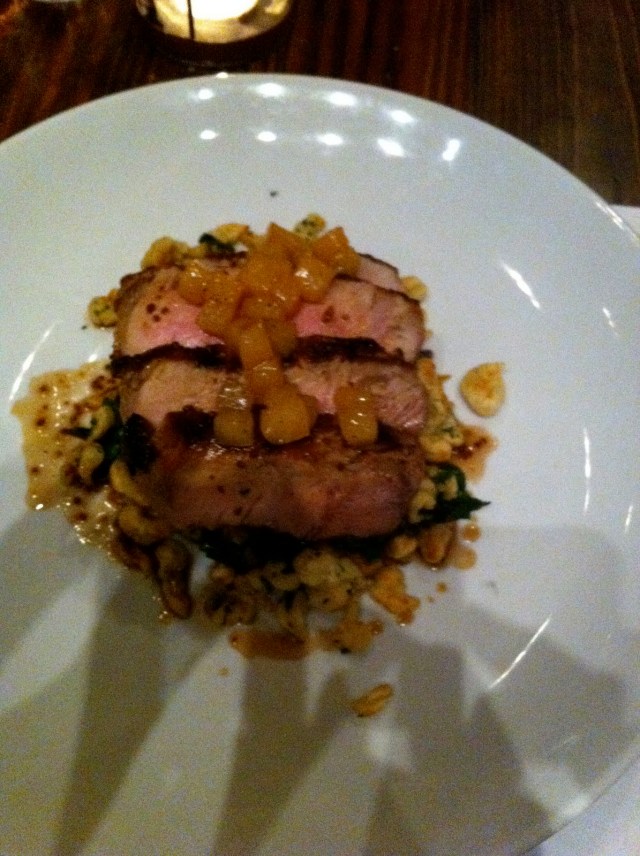 The pork and pear combination was awesome – when Peter Brady’s spoke of “pork chops and applesauce” he was onto a hot culinary creation.  Jo had the chicken pot pie, which WAS quite tasty and this cream of celery soup that she talks about to this day.  A good bit. 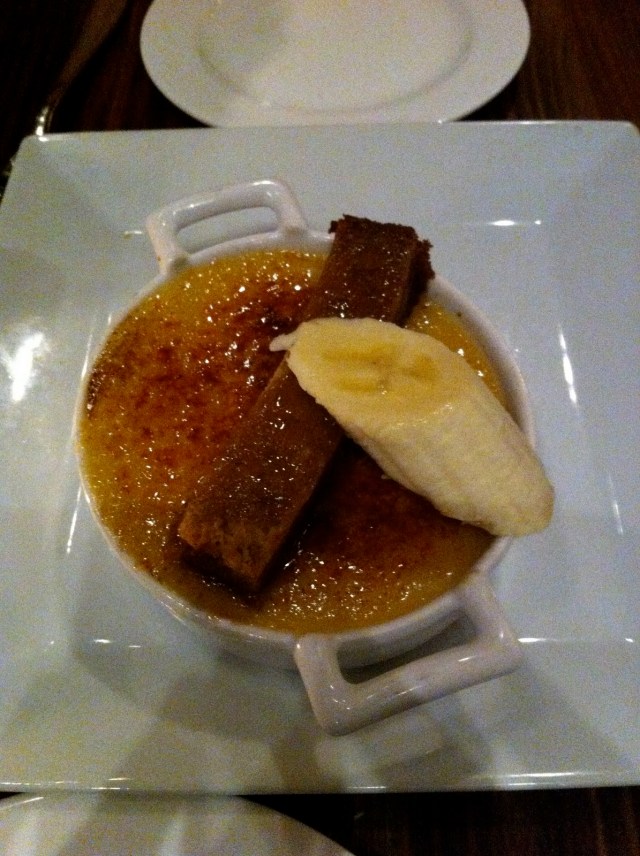 About two weeks later we went for brunch, for the first time.   For an ode to that formerly fabulous experience, look to the bottom of the review.  We had been back for both lunch and dinner since those halcyon days of brunch.

One evening, my daughter and I were looking for dinner, as we headed across the top-end, and I called for a reservation.  They offered a 6:45, I countered that I could be there by 6:49, she said “deal” and we moved into the left lane and pulled in on two wheels, with 30 seconds to spare .  We had a great server.  That’s one of the best features of Local Three, other than the food.  The staff at this place is top notch (as they are at also-owned Muss & Turners) – well informed and very helpful. 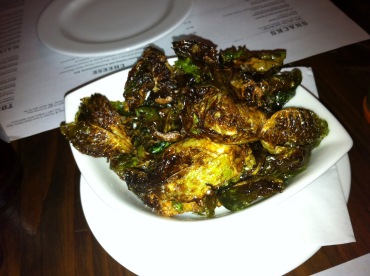 As we looked through the menu, she told us that she had an appetizer that would “change our lives”.  I asked what that could be and was told crispy brussel sprouts.  Brussel sprouts?  Was she serious?  She was.  I hate brussel sprouts.  That may sound harsh, but I distinctly remember the last time that I had eaten brussel sprouts.  I was eight years old.  My mother had made them for dinner.  I wasn’t interested.  She told me that I would try them before I left the table.  Ultimately, I did.  Then I threw up all over the table.

The server said they were really good, so for $5 we gave them a try.  And I didn’t throw up.  They weren’t awful, but they weren’t that good.  Live and learn. 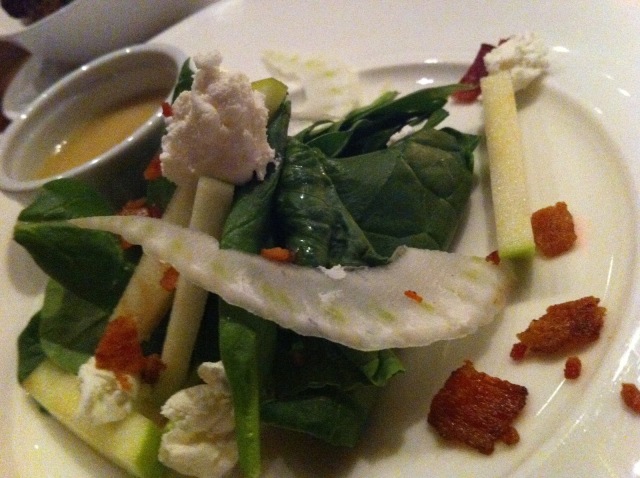 We also had decided to split a salad – spinach, fresh pears, feta cheese and bacon.  It was very good – Local Three was back on track.

On to the burger. I had eaten it for lunch one day, late last summer.  They call it the McDougal (two all beef patties, lettuce, cheese, pickles, onion), 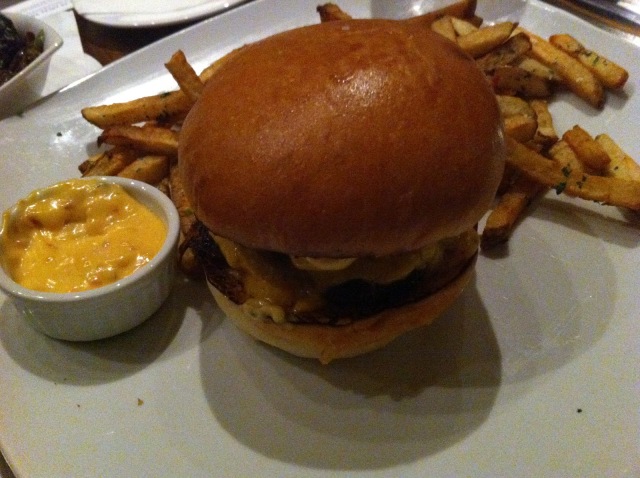 served with fries and sambal sauce.  I ordered it again, and it arrived a gooey mess.  This was a truly good burger. 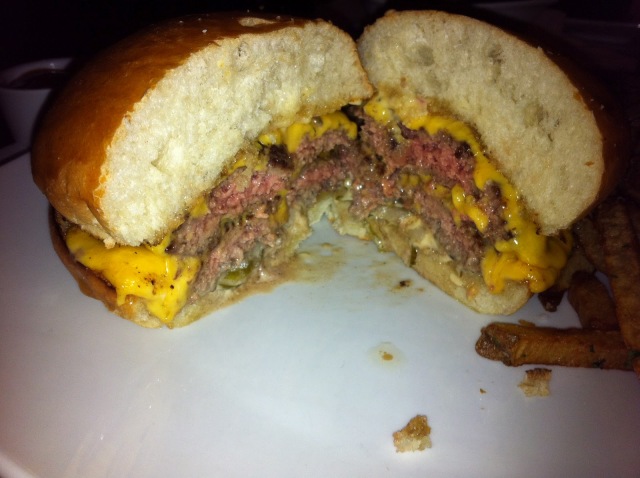 I will likely have the burger again, but when you have to choose between the McDougal, their killer chicken pot pie and daily specials 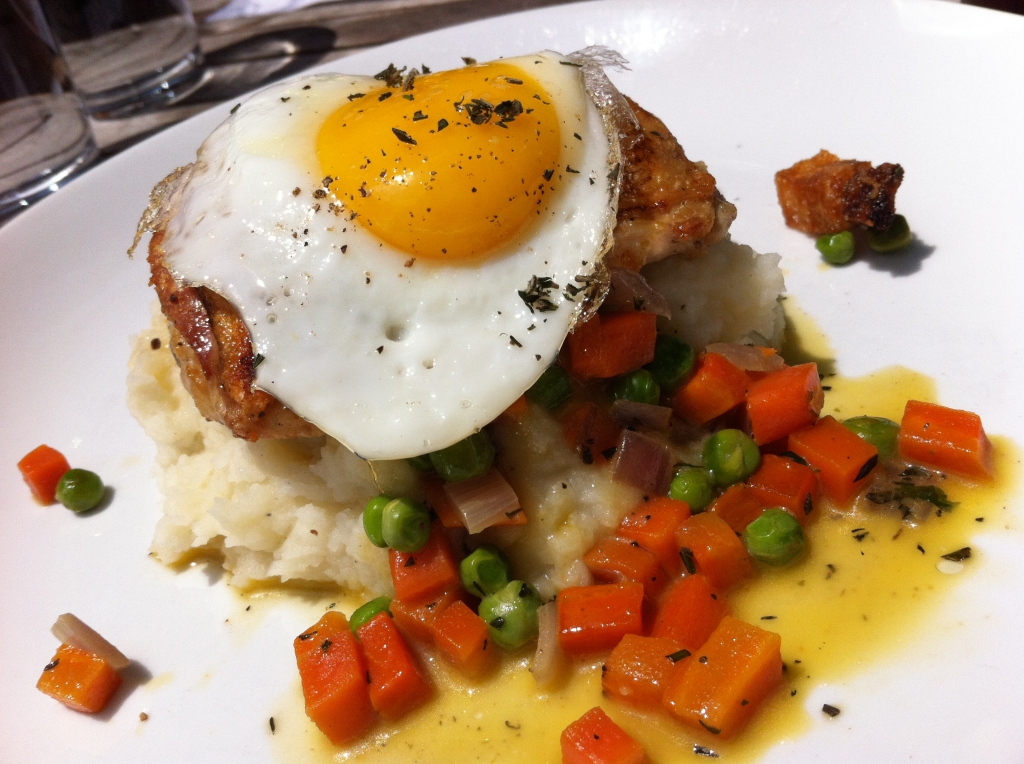 (like the Fowl Play – a fried egg, two chicken thighs, mashed potatoes, peas and carrots), choices can be tough.

Their formerly fabulous brunch is what we kept returning to.  It was the most unique presentation of a brunch that I’ve ever been to. Follow the menu: 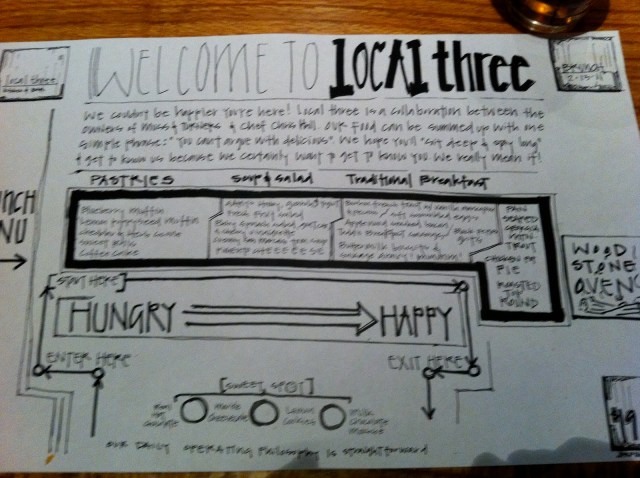 It’s beautifully simple.  Enter the kitchen hungry (on the left).  Wander through the pastries, then find your way to the soup and salad (don’t skip the pimiento cheese, follow that up with their traditional breakfast and finish with the brunch / lunch items.  Then you exit happy.

You’re actually going into the kitchen and the chefs are cooking the food and placing it on the serving line as you pass through.  It is a beautiful thing.  A properly executed kitchen pass resembles this: 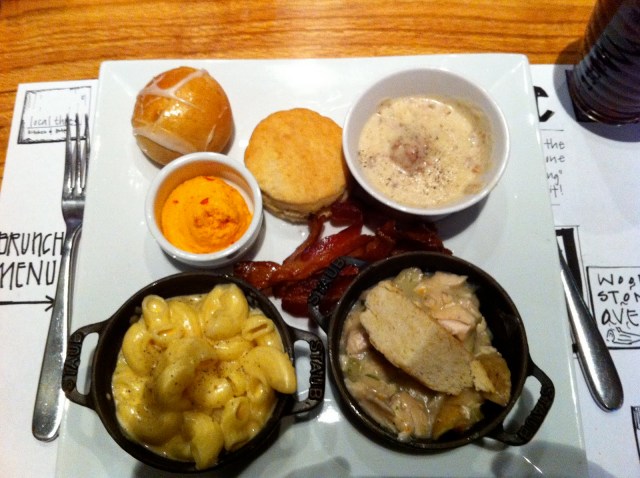 There’s also a sweet island out front, but that was one of the occasions where I skipped dessert.

And had more pimiento cheese and bacon.  It was the best brunch in the city, when it was happening.