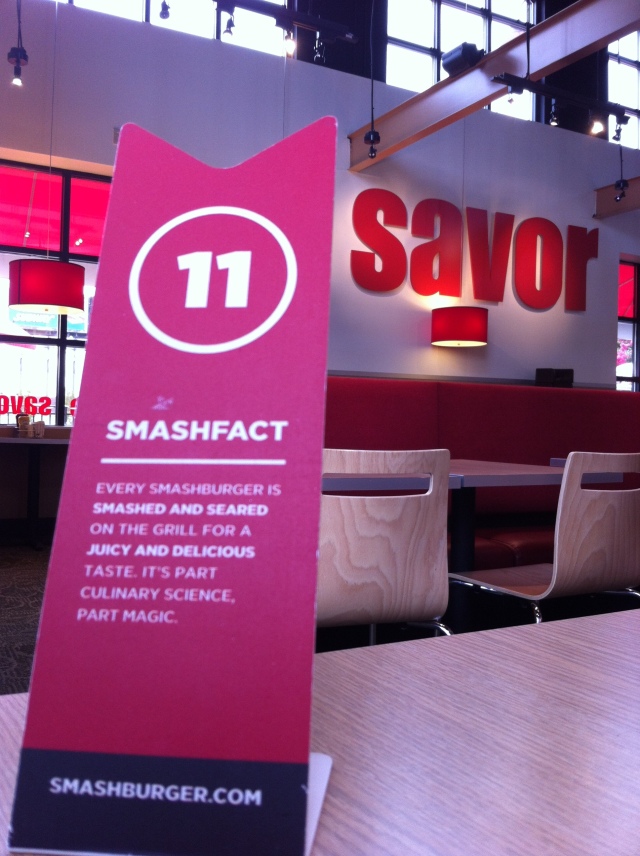 As I had to be on the opposite side of the city for a meeting this afternoon, I had the opportunity to meet an old friend for lunch. Knowing of my penchant for burgers and looking for a place where our paths might intersect, he suggested that we try SmashBurger on Roswell Road.  I had never been there before so I could kill two birds with one stone: catch up and try a new spot.

Part of the SmashBurger premise is that they “smash” each burger fresh daily.  I infer that this means that the beef is ground fresh daily.  That’s the top first criteria for being a good burger in my book.  Although I’ll have to confess that last Saturday I has an uncontrollable urge for a Whopper Jr. Why? I don’t know. But at 10:00 pm, I had one. By 10:15, I wondered why…

I couldn’t tell if their french fries were fresh cut or not. But I get the feeling that they weren’t because nowhere did they proclaim that fact as loudly as they did that their burgers were fresh “smashed”.  That’s the first opportunity for improvement.

Burger choices are traditional, beef, chicken or black bean.  The young lady behind the counter said the burger was made fresh.  And that they used Tyson chicken (grilled or crispy).  So I asked about the black bean burger – made in house or purchased?  The very helpful young lady behind the counter told me that they made them in-house with black beans, blue corn tortilla chips, egg, some Tabasco and a few other things.  I’ll keep that in mind for a potential future visit.  I hate a black bean burger that falls apart on you.  This one may not.

Similar to Five Guys, you place your order at the counter, they give you a number and then bring the food to your table.  That seems to be the most obvious comparison.  In fact, looking at the “buzz” section of their website several of the articles lump them together, strategy- and style-wise.  And I did learn that the man behind SmashBurger is Tom Ryan – the man behind both stuffed pizza crust and the McGriddle.

Their menu varies by region, so I chose the Atlanta (beef) burger, smash burger sized (this means larger, not a double patty) covered with peach barbecue sauce and some Wicked Pimena™ cheese – hold the Vidalia coleslaw, on an egg bun with sliced jalapeños on the side. 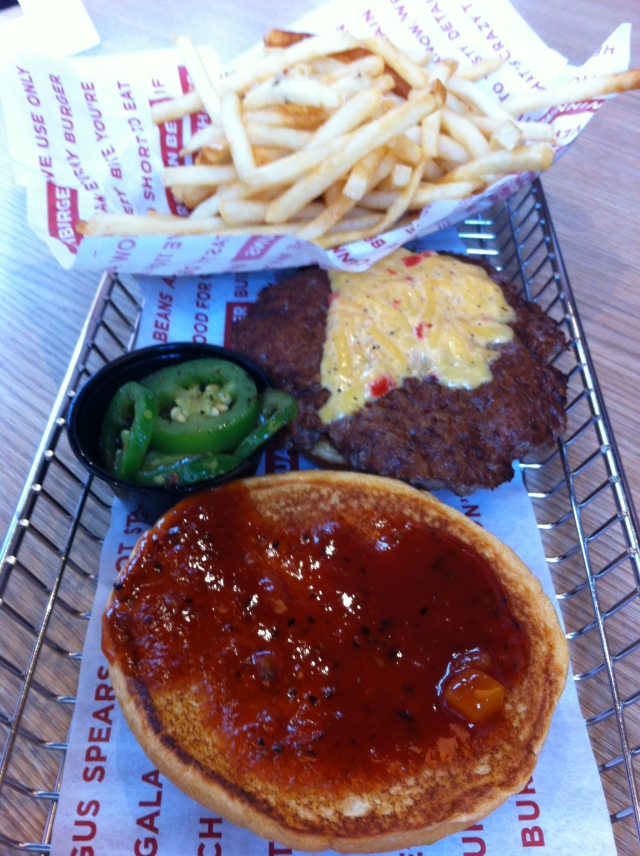 The burger was okay.  It wasn’t great for two reasons, the primary being that they cook every burger to medium well, without giving you a choice.  I understand that there is a concern about under-cooking, but I’d prefer a place that sacrificed “volume” for “flexibility” in this regard.  So if you prefer your burger with a little more color it is not an option here.  The second detriment was that they skimped on the cheese.  Look at the picture – that’s all the cheese that was there.  If I’d have know how little of a taste impact it would have on the burger, I would have tried some on the side first to see if it was any good. Otherwise, the outside had a good sear / char and the egg bun was complimentary.  The peach barbecue sauce was good – just enough sweet, just enough bite.  In fact, it was probably the best thing about the burger.  The french fries were fine, very much like steak and shake, but nothing special.

Service time was very quick so this definitely meets the “fast” food criteria.  I can see where SmashBurger would be a good quick food opportunity, if you were near one of their five Atlanta as locations.  I don’t think that they will pass Farm Burger or Yeah! Burger (or even the Counter) in terms of quality but they are in that same competitive space as Five Guys and Boardwalk Burgers.