While driving around Duluth a while back, I saw Amazing Burger in a strip shopping center in front of the Kroger on Steve Reynolds.  I made a mental note of its location and thought that one day I’d swing by at lunch and see how it was.  This Monday, with no one else around the office, was the day.  I made the short drive, found a place to park and sauntered inside.

It looks very much like the new wave of burger joints in town (Canyon Burger, Boardwalk Burger, Smash Burger, etc) – you walk in through a “channel” of some sort (this was formed with the interior left wall to my left and a half height wall separating the order line from the dining room on my right).   You then order at the counter.   The menu was fairly broad, with burgers, salads, wings, seafood, phillies and fried rice.  They give you a to-go cup to fill from the soda fountain and you find a seat.

One of the things that I noticed while I was waiting was the inordinate amount of hand made signs that looked very Pokemon- / San Rio-like.  And this giant sign on the wall to my right:

As I looked more closely at the sign, everywhere there was the word “Amazing Burger”, underneath you could see where the words “What-a” were under the “Amazing”.   Interesting.  Courtesy of my friend, Google, I found that they used to be named What-A-Burger.  I think they MAY have had an issue with Whataburger, but that’s a supposition.

I ordered a classic Amazing cheeseburger, with bacon, tomato, mayo and ketchup, with fries.   When it arrived,

two things jumped out at me:  1) that’s a HUGE bun; and 2) those are frozen Ore-Ida crinkles.  The bun was incredibly chewy.  The more of it that I ate, the larger the bun seemed to grow in my mouth.  The burger itself was cooked fine.  The bacon was really good.

Then I squeezed some ketchup onto my plate.  It said Heinz, so that was a big plus.

Side-note: I am something of a ketchup-snob.  In fact, as far as I’m concerned, there is only one ketchup (Heinz) and everything else is a pitiable imitation.  There is a restaurant that we used to go to for lunch at the Arena at Gwinnett that had really good food, but really bad (Hunt’s) ketchup.  I finally just bought a bottle, put it in the office fridge and took it with us every time we went.  The waitress got used to it, after a while. 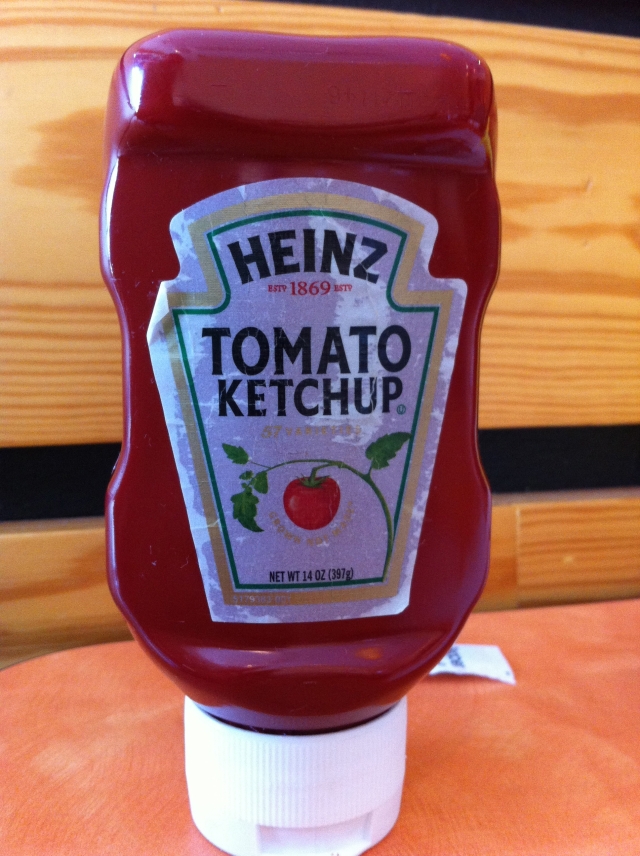 Has that bottle been washed?  The label looks brown.  I deduced that they had bought Heinz the first time, then washed the bottles real well and re-filled it with cheap ketchup.  This is border-line criminal.

Reading on-line, I see that they classify themselves as Asian fusion fast-food.  If there was actually a truth in advertising law, the name of this place would be “(Not So) Amazing Burger (and we lie about our ketchup.”  Needless to say, I shan’t return.