When we were heading to Nashville, one of the first food goals was hot chicken.  What is hot chicken, you ask?  It is a Nashville creation and a local delicacy, created by marinating the chicken in buttermilk, then breading it then rubbing it with a paste that is heavily spiced with cayenne pepper.  And the epicenter of the hot chicken universe is Prince’s Hot Chicken.  It’s been featured on both Man V Food Nation and Diners, Drive-Ins and Dives,

Set in a strip mall 5 or 6 miles from downtown Nashville, when we arrived at 5:15, there were already folks lined up for carry out.

While we were standing in the middle of the restaurant looking at the menu, the cake lady (in the green toboggan in the middle, above) became quite insistent that we needed to go to the window in the back to order. In fact, when Jo asked her a question about the chicken, she told her “they” could answer it.  If she’d just GO to the window.

One of the first things I noticed was the styrofoam plate with “Cash Only” written on it in Sharpie.  The menu was above the window:

(all of these could be ordered mild, medium, hot or extra hot)

and the sides (which were all a la carte):

We got to the window, were informed they were cash only, and ordered – Jo a breast (medium) with cole slaw and baked beans, me a half chicken (hot – why not? I like spicy food) with fries.  When I asked about drinks, she pointed to the cooler cabinet filled with Pepsi and said “and there’s that Coke machine”.  In the restaurant.  Honest-to-God.

We took our number (twenty-one – I noted she was calling fifteen when we walked up) and picked out a seat at one of the booths, circa 1983. I noticed while we sat there that they’re open until 4 am Friday & Saturday nights. I imagine it is a very different place at 3:30 am than 5:30 pm.

and opened into this: 1/2 of a chicken, covered in pickles, on four slices of sweet white bread, with a side of fries 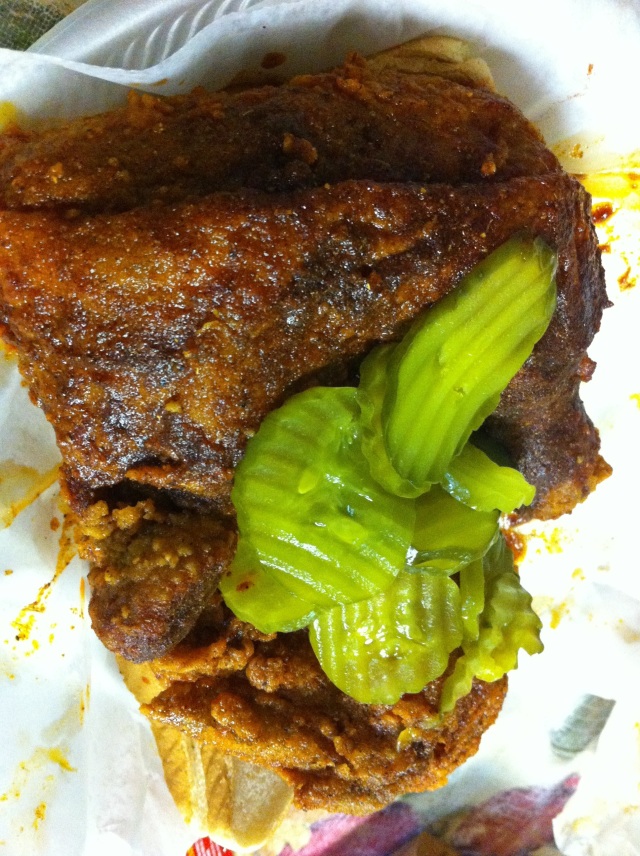 First, I removed the pickles, then I dug into the chicken with the two plastic forks (no knives – there was not a plastic knife in the place).  The skin was extra crispy and peeled off in long pieces.  The meat was incredibly tender and when mixing the chicken with the bread in the sauce it was heavenly (and hellish, at the same time.)

When it was ove 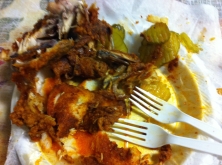 r, my fingers were red, my right nostril felt like I was breathing fire and I was sweating on top of my head.  I like hot food.  I actually love it. (Jo doesn’t like hot food and medium was a bit much for her.)  This was over-the-top.  This may have been the hottest thing I’ve ever eaten.  But it was incredible.

And both Saturday night, before we went back to our hotel, and Sunday morning, before we got out of bed, we talked about going back to Prince’s and splitting another plate, medium.