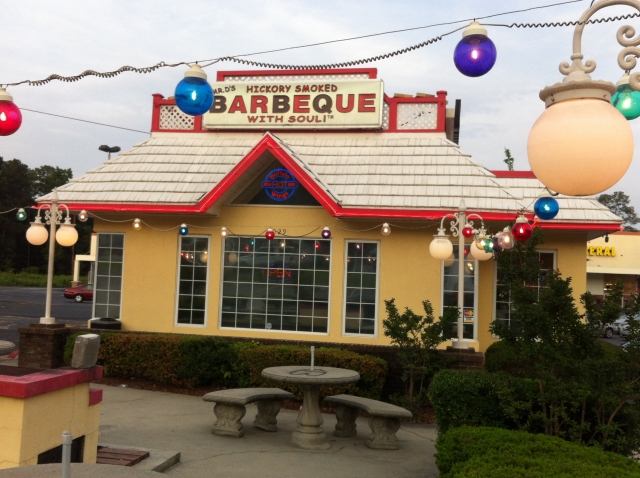 Mr. D’s Hickory Smoked Barbecue With Soul was not my original dinner destination.  I was originally headed to the Sweetwater Inn, a place that I had driven by for the past thirty-two years and yet had never stopped.  I was determined to not let another birthday pass without knocking this one off my list. 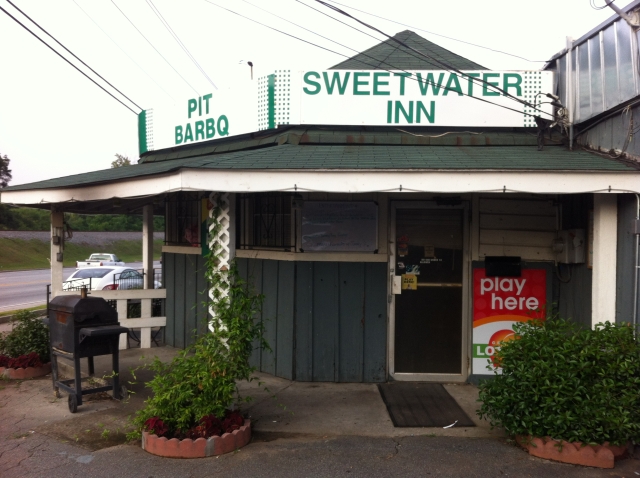 The first thing I noticed as I walked up was the sign “No One Under 18 Allowed”.  This didn’t portend well.  As soon as the door opened, the cigarette smoke began to poor out.  Walking in, the entire place reeked of it.  You actually enter into the bar, a partial hexagon facing a wall of blacked-out windows with video poker machines.

At 7:30 on Saturday night, the sole occupant at the bar was throwing down something in a highball glass with her left hand and holding a cigarette in her right, wearing a “little black dress” that didn’t match her AARP card.  I quickly turned to the right toward the restaurant itself.  Every table, except for four of the twenty five or so tables and booths, had a balloon tied to one chair – they were obviously planning for a party.  The blues band onstage (“they were something, back in the 70s”) was tuning up.  I asked the server if the entire restaurant was smoking.  “Yes, sir!”  There was no way I was getting Kool-flavored carryout.

My plans dashed, I headed toward the house trying to find something different to take home for dinner.

On a side note, I said something to my dad about my attempt at the Sweetwater Inn.  “Why did you go there?” He then went on to say his Dad had told him that he better not ever catch him there (“they served beer”).   This was in the late 40s.  Mystery of why I’d never been there was solved.

Heading up Austell Road, I passed Mr D’s, thought “what the heck? It can’t be any worse”, and made a u-turn at the next light.  I entered the parking lot, saw that there were a few cars and parked.  I walked to the front to take the picture at the top and looked at the decor, in detail.  I don’t know if it was the string of colored glass lanterns (that, oddly reminded me of the Chinese restaurant in “A Christmas Story”) or the concrete patio furniture, or the Arby’s meets a pagoda roof line or the really long name, but I was sold.

As I walked in, I noticed one trio eating dinner at a table and a lady at the counter ordering carry-out.  I stepped up to the counter to look at the menu and chatted with the matron who was taking my order.  I asked about their sauce and she half filled a condiment cup and handed me a spoon.  As I sampled it (thick, sweet and a little spicy) I learned that:

After ordering, I took a seat in the corner and watched.  Three more neighborhood folks came in to order carry-out and a couple with two young kids came to dine in.  I walked out back looking for their pit, but didn’t see the tell tale smoke, although I learned that the speaker on their drive-thru was broken and you’d have to pull up to the window to order from your car. 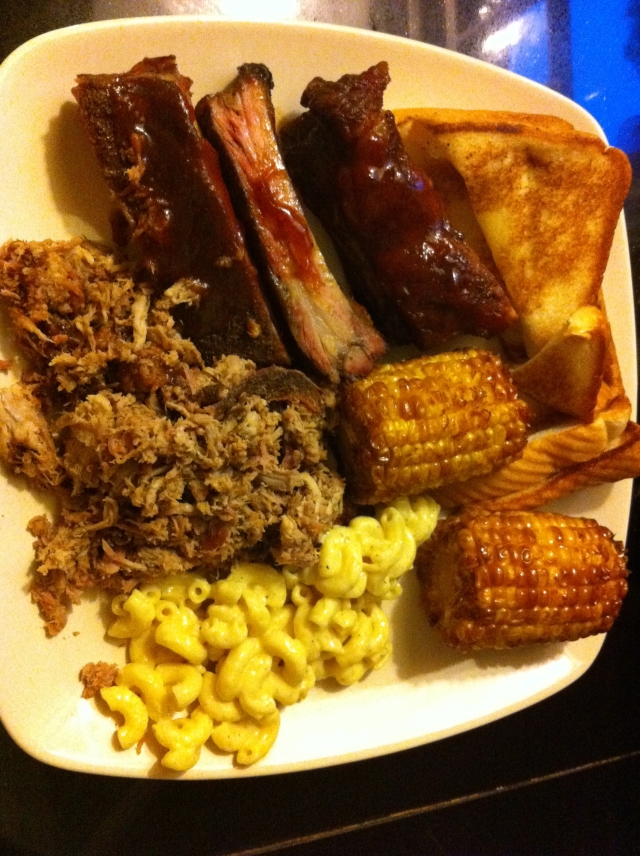 I ordered a two meat combo – ribs and pulled pork – with mac-n-cheese and fried corn.  The corn was much more like grilled corn than fried, as they apparently don’t batter the corn before frying.  It was a little crunchy and good.  The mac-n-cheese was fairly generic and fine.  The ribs were good – not particularly meaty, but they had a good taste and I really liked their sauce on them.  But, for me, the pork was the winner.  Chopped finely, with flakes of pepper, slathered in that thick sweet and spicy sauce on Texas toast, it more then made up for the evening’s earlier travails.