June 9, 2013 · by willoughbyandy · in Douglasville / Lithia Springs, Everything Else, Georgia · 3 Comments

For my birthday, my parents wanted to take us out for lunch.  Looking for something convenient, and knowing their fondness for the place, we met at Dinner’s Ready.  We’ve eaten there in the past, once or twice.  It’s been okay.

In my opinion, there is a considerable issue with the management.  Management issue 1: This place is always busy on Sunday after church.  They have a very strict we-won’t-seat-you-until-everyone-in-your-party-is-here policy.  That’s fine – I understand the seating concerns.  They are, however, quite rude about it.  When we’ve been in the past, it’s just been the two of us, so this was a new facet of the place.  I’m willing to let the rudeness ride, today, because my parents love this place.  (I honestly think this may be the number one restaurant in West Georgia among the over seventy crowd.)

The concept is easy and designed solely to move people through quickly.  The entire day’s menu is printed on a third sheet of paper.  You select what you want, put your name on it and the server picks them up and take them to the kitchen.  As you can see, 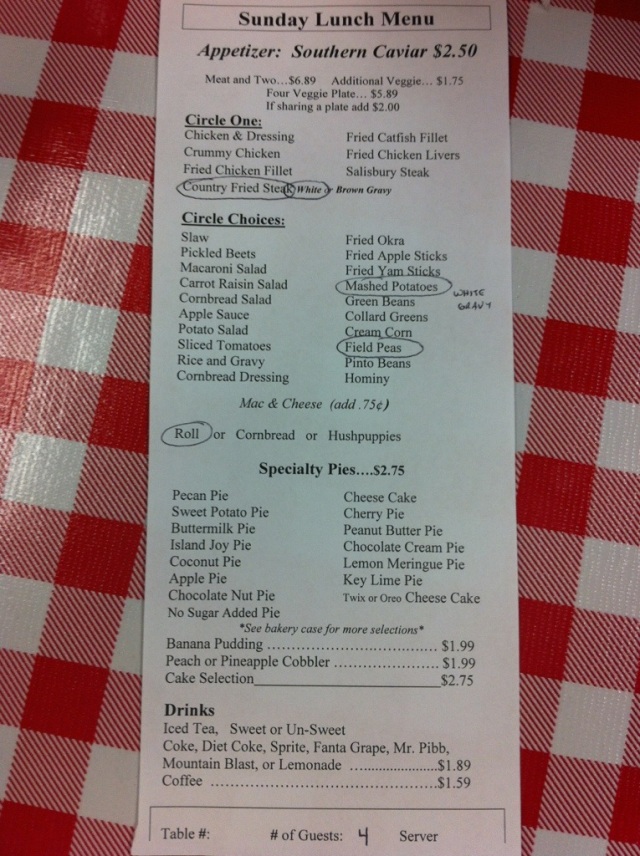 I ordered the country fried steak (with white gravy), mashed potatoes and gravy and field peas, with a roll.  I added a side of sliced tomatoes as the server was confirming our order.  Within fifteen minutes, maybe even ten, the food arrived: 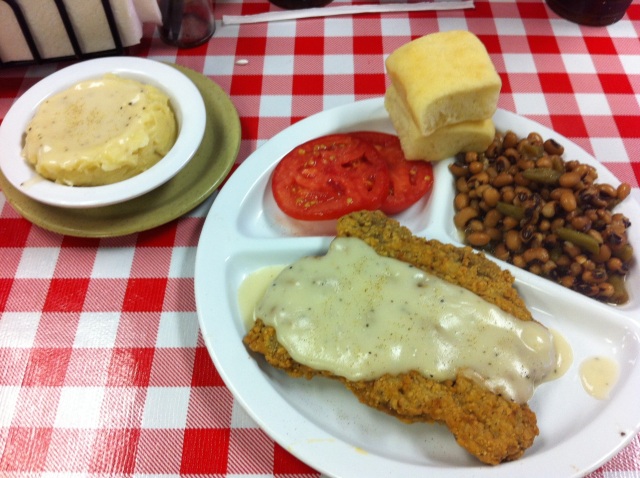 The country fried steak was good – similar to that at Cracker Barrel.  (You may have noticed that I use Cracker Barrel as a comparison for most “home style” restaurants.  My belief is that most folks have eaten at a Cracker Barrel and can use that as a point of reference).  The peas tasted like they were either frozen or from a can.  The potatoes appeared to be from a mix.  The tomatoes were, at least, fresh. The rolls were okay.

Management issue 2: About half-way through our meal, we heard the waitress talking with the owner (her mom) and mom was telling her that they needed to clear our table and the one next to it (both four tops) for a party of eight.  From that point on every time it appeared that we were done with a plate, it was immediately cleared.  They tried to take mine, before I was done eating.  Twice.  The woman seated at the table next to me told me that they had been “rushed out” on a couple of occasions.

That was a good description – we were being given the “bum’s rush”.  Owner-mom was determined that we were going to be gone soon and she’d have that table.  Irrefutable force, have you met immovable object?

Realizing what was occurring, we savored the last of our meal.  Then with a clear view of the kitchen, Jo asked for some decaf coffee.  “I’ll have to brew some,” said the young server.  “That’s perfect”, said my bride.  My mom, never one to pass up coffee, ordered some also.  Seven or eight minutes later, the server brought the coffee to our table.  They drank it fairly slowly.

Owner-mom came back around while we were waiting for the coffee and said the party of eight had left.  Before we left, Jo called the server over and explained just how rude their behavior was.  On occasion, I’ve made several waitresses cry, but this is the first time that my wife has.  Proofing this post, I see that I’ve used the word “okay” on multiple occasions to describe the food.  There are too many “good” places to eat to settle.  Between the food quality and the attitude, we won’t be back.